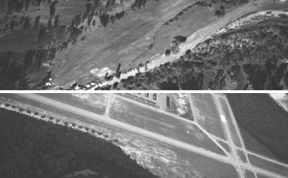 Managing risks is a duty pilots accept routinely, but the accident record suggests one aspect of flight planning is routinely ignored – the destination airport.

Selecting the destination airport is usually a matter of convenience. Its close to the meeting, near the friends house or has cheap fuel for the next leg of the trip. Take a cursory glance at runway length, record the applicable frequencies and off you go.

All too often, however, the destination is just a stop on the way to misery. Unexpectedly narrow runways create visual illusions. A pilot caught trying to decide between landing with a tailwind or a downslope makes the wrong choice. Airport construction, non-precision approaches, non-standard lighting – the list of hazards goes on seemingly forever.

Risk, of course, is in the eye of the beholder. What for one airplane is a ridiculously short runway is but a walk in the park for another. What one pilot considers a hairy approach is another pilots piece of cake.

Measuring the risk involved in the approach and landing at an unfamiliar destination requires an objective assessment rather than an educated guess. But many pilots are unprepared to make what should be essentially a calculation rather than a judgment. Even the most experienced pilots have not encountered every permutation of risk that can be involved with landing, but fortunately there are seldom more than a few serious risk factors at any given airport at any given time.

To get a handle on destination risk, it helps to break the approach and landing into five components, then assess the state of each one: the crew, the aircraft, the approach, the environment and the airport itself. Following that, look at whether the various components interact with each other to magnify the risk at hand.

The last thing you want to do is to file these criteria into a mental hopper and pull them out as you start your descent to try to get a level of how good you should feel about the task at hand. This can all be done ahead of time relatively objectively, in much the same way you should set personal minimums for instrument approaches based on proficiency and equipment.

The five components of approach and landing need to be considered separately and together. The important thing is to be systematic about it.

Crew
There are two main criteria for assessing the state of the crew, assuming of course that the pilot(s) are qualified and proficient enough to be putting themselves into the position of taking the flight in the first place.

First, single-pilot ops are generally more risky than flights with two pilots aboard, provided the two pilots have an understanding about who is responsible for what. An exception to this rule comes when the pilot flying might feel the need to prove prowess to the other pilot – such as descending below minimums on an approach or skirting too close to a thunderstorm.

Aside from those cases, however, two pilots are generally better than one because each can act as a check on the actions of the other. Plus, you have one pilot to handle communications and look for the runway while the other flies the approach, for example. Having to do all the work yourself adds to the workload, the chance of making a crucial mistake, and therefore the risk.

Related to the single-pilot issue is the question of leg length and fatigue. Flying a four-hour leg on a Friday night after a difficult week at work would tax anyone. The pilots ability to fly a difficult approach or cope with risks at an unfamiliar field will be directly dependent on his or her energy and alertness when it comes time to land.

Aircraft
The aircraft and its equipment will have a bearing both on how prepared the pilot is for the challenge ahead and what kinds of demands may be expected. A fast, complicated or unfamiliar airplane will force more of the pilots attention toward operating the machine and leave less available for situational awareness and planning. A moving map that outlines procedure turns or an HSI for a complicated VOR approach can reduce workload significantly.

Into this mix must be a general understanding of how complicated or unfamiliar avionics, while powerful, may actually increase risk by dint of an unfamiliar pilot having to focus too much attention on the boxes.

GPS operating logic is a case in point. While such devices as the Garmin 530 have awe-inspiring features, they also demand the pilot understand their operating logic in order to use them to full potential. We suspect there are scores of airplanes with Garmin 530s or 430s installed in which the pilots routinely use little more than the direct to button. While its legal and safe to use less than a piece of equipment is designed to do, it makes sense to know the full capabilities of both the aircraft and avionics installed.

The stakes increase as the airplane becomes more sophisticated. For example, collision avoidance systems are making their way into less sophisticated airplanes, but extraneous alerts during airport traffic patterns or instrument approaches can provide dangerous distractions.

Other distractions can come from malfunctioning equipment – and the more the airplane has the more likely it is that something will malfunction. Know how to silence warning alerts and turn off offending equipment if you dont need it.

Approach
Any instrument approach carries some risk with it. Approaching an airport has varying degrees of risk depending on the instrument approach involved. Sure, precision approaches are generally easier and more accurate than non-precision, but theres more to it than that.

If the airport does not have a Standard Terminal Arrival Route it is more difficult to plan your route and set up your navigational aids ahead of time. While controllers will usually give ample notice, periods of high workload may leave them giving you last-minute clearances.

Non-precision approaches deserve special attention because they can include step-down fixes and circling for a runway. Both increase the chances of making a mistake, getting disoriented or falling a step behind the airplane.

Late runway changes can also cause problems, not only because of the steps necessary to intercept and follow the new approach, but also because the change may come at a time when it disrupts your prelanding checklist. Make sure you have a procedure in place for picking up where you left off or you must start the checklist over again.

In addition, any approach at night is more hazardous than during the day, but visual and circling approaches are particularly so because they require a subjective view out the window instead of a more structured navaid indication.

Environment
The airport environment has a profound impact on the safety of operations around the airport, yet the information is far more cumbersome to compile than the other hazard areas.

Some of it is obvious. Hilly terrain, towers or other obstructions are charted and reported in such publications as the Airport/Facilities Directory. Weather conditions, including visibility and runway conditions, should be part of every preflight briefing.

But others are not so apparent. Pilots can fall victim to illusions from the black hole effect, sloping terrain, wet runways and snow. Particularly wide or narrow runways can fool you into thinking youre higher or lower than you are, or closer or farther from the airport than you are.

And some are just crapshoots. Hazards from birds, deer and other wildlife are unpredictable, but some airports are more prone to disruption than others. Some airports close a runway for drag racing or allow pedestrians or traffic on taxiways. While such items should carry a Notam its dangerous to assume they always will.

Airport
By now youve navigated to the airport through all the obstacles, perhaps a little worse for wear, perhaps not. Its here, close to the ground – with a destination firmly in mind and almost within grasp – that the risks pile up. Its here where you find out that you have either managed the risks successfully or you have not.

Its also where there are the most risks. Every airport has its own fingerprint, its own combination of conveniences and traps.

Non-towered airports present risk when IFR traffic mixes with VFR traffic in marginal conditions. Nonstandard or missing runway lights can confuse the pilot who is not prepared. Unfamiliar turf, perhaps due to special local procedures, can find pilots expecting one thing and getting another.

The field itself can present surprises, too. Poor drainage, non-standard markings and poor pavement conditions top the list. Circuitous taxi routes can add to the hassle, although they may not present safety issues in and of themselves.

Sloped runways can lead to confusion as the pilot struggles with the bad choice between landing downwind or landing downhill. Opposite-direction approaches and departures put airplanes into conflict at times when a transient pilot is least prepared to deal with it.

The Point System
To get the best feel for evaluating destination risk, turn to two very disparate sources. Alaskan operations are among the most hazardous, due to terrain, the dearth of navigational aids and the wide variety of unimproved and barely improved airstrips. Business aviation, being well-funded and safety conscious, relies on training, equipment and conservative judgment to create a safety record nearly on par with the airlines.

PenAir, the largest commuter airline in Alaska, has created a Runway Risk Assessment form that assigns points to various hazards and aids. Add points to take hazards into account. Take away points for aids such as long runways and instrument approaches. If the final tally exceeds a certain value, scrub the flight, no questions asked.

The Flight Safety Foundation has created an Approach-and-Landing Risk Awareness Checklist that rates hazards with a symbol. The more symbols, the more risk. Although the list is more comprehensive than PenAirs in that it includes crew, aircraft and approach criteria, it is far more conservative. For example, it assigns high risk to a flight conducted without some kind of ground proximity warning system.

By examining the two systems, its clear that most operators can create their own, tailored to the kind of flying they do. Making risk assessments in the serene light of an easy chair is far easier than doing so in a bouncing cockpit with numb fingers and a concern about dwindling fuel.

Once you create your own risk assessment chart, use it to rate your flight. Dont allow your need to be somewhere to induce you to fudge the numbers. And when you get a final tally, accept it – even if it doesnt give you the answer you want it to.