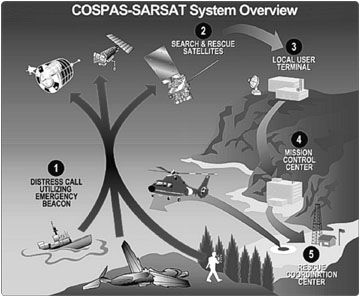 Of all the things that we as pilots would want to use least, our emergency locator transmitters, or ELTs, have to rank near the very top. And, because they have earned a bad rap over the years-they often dont work when needed most-ELTs have become a sore subject with pilots and aircraft owners.

It doesnt help that ELTs were an imperfect technology when they were mandated by Congress (see the sidebar on the opposite page). Nor does it help that they generally are installed at the rear of an aircraft where they are most difficult to access and where they are likely to survive a crash-and where they can have the greatest impact on weight and balance. In addition to not working when needed and taking up valuable payload, it also doesnt help that they often generate false alarms, costing search and rescue (SAR) assets throughout the world a great deal of time and money. But it doesnt have to be that way and-maybe, someday soon-it wont be any more.

Background
Imagine if you will thousands of ELTs, Emergency Position-Indicating Radio Beacons (EPIRBs, a marine version of the ELT) or as Personal Locator Beacons (PLBs) activating each year all over North America, each one generating no more than 0.75 watts, with nothing but an up/down warbling tone to (hopefully) catch someones attention. No caller ID, no position other than homing by SAR resources. In fact, reliable estimates say that 97 percent of all ELT alarms are false ones. When you consider that there are some 700,000 ELTs throughout the world working on 121.5/243.0 MHz, you start to get an idea for the problem. Then consider that the position information gained from orbiting SAR satellites is only accurate to within 12 to 15 nm after three satellite passes. With all these problems, you beguin to understand that for any SAR duty controller an anonymous ELT alert was as useful as barking dog call.

Future Plans
Nobody really disputes the idea of emergency beacons-we just want something that actually works, not something that fullfills Congress idea of doing something, even if its wrong (See Transportation Security Administration-Ed.).

The answer is to change over to a different design, one otherwise known as the 406 MHz beacon. Instead of operating at one watt or less power, newer 406 beacons transmit at five watts, allowing the geostationary and orbiting satellites to pick them up much more quickly. Because the newer devices take advantage of the advances in digital communications, frequency stability is much better, resulting in a higher-quality Doppler shift for position information. In fact, a GPS can be interfaced or integrated to the ELT/EPIRB so a 100 meter position is broadcast to the satellite. The sidebar on page 20 details the major differences between older ELTs using 121.5/243.0 MHz and the newer 406 MHz units.

But to the SAR duty controller, the best thing is that all 406 MHz ELTs/EPIRBs broadcast a serial number that ties in with NOAA registration files. Among the benefits are no more anonymous alerts and specific information as to which unit belonging to which aircraft/vessel/person is transmitting an alert.

In fact, there is little doubt about the field performance improvement of 406 MHz ELTs when compared with the older-technology units. So far, one out of 12 406 ELT alerts are real, rather than the abysmal record set by 121.5 ELTs. With an alert by a 406 MHz ELT, the SAR duty controller can make a phone call to the registered owner and verify whether the distress is real or a false alarm. And, 45 minutes later, two or three SAR assets can be on the way to a position fixed within 100 meters. In fact, one could say the search portion of a search and rescue mission has been largely removed.

But, like so many things in aviation, theres no free lunch: The 406 ELTs cost more than 121.5/243.0 units. The 121.5/243.0 MHz ELTs meeting TSO 91a can be bought new for about $200. By comparison, a new ELT meeting TSO C126, i.e., operating on 406 MHz and capable of sending hyper-accurate GPS-based position data starts at around $1600 and goes up from there. And thats for a unit that interfaces with an existing panel-mounted GPS navigator, not one with a self-contained unit.

A Likely Scenario?
Now that you have recovered from the sticker shock, lets evaluate what you have installed and what you wont have to worry about.

Lets presume youre flying by yourself at night and planning to land at a not-so-well-populated airport. Unfortunately, you were not paying attention to the VNAV profile on your Garmin 530/430 and hit trees well before the airport property. If your deceleration was greater than 4.5 feet/second (very likely) your TSO C126-compliant 406 MHz ELT has activated. Since your new ELT is connected to your GPS, a 100-meter position is transmitted along with the units serial number.

One of the geostationary satellites hears the signal and forwards it to the NOAA SARSAT office in Suitland, Md. A duty controller looks up the registration information completed when the unit was installed, sees it is assigned to an aircraft and calls your listed phone numbers. Those calls confirm you are flying tonight. Since the position shows this to be an inland case, the controller forwards the file to the Air Force Rescue Coordination Center at Langley AFB. A SAR controller notifies the sheriffs office about your crash, even saying how far north of the county road you are.

After being rescued, you have the chance to borrow a cellphone to call the NOAA SARSAT office to thank them. Youve already forgotten about the $1400 price difference.

Deadlines
We already mentioned one deadline coming up on February 1, 2009, the date beyond which COSPAS/SARSAT satellites will no longer monitor 121.5 MHz signals. For jets, the deadline for installing at least one 406 MHz ELT with automatic activation was January 1, 2004. For non-jets, there are no FAA-mandated deadlines, only your own personal time limits as you wait for another aircraft to be monitoring 121.5 MHz and hear your automated plea.

Taking It Personally
Since a well-prepared pilot is always prepared, what about the idea of a Personal Locator Beacon, or PLB? Today, PLBs are down to about $600, have a built-in GPS receiver for 100-meter position accuracy and are small enough to fit into your flight bag, life raft or glovebox. You never have to worry about what the aircraft has installed because you have your own, although you have to activate it yourself.

-Paul Sanchez (sanchezpaulk@mac.com) is a CFII-MEI who does insurance qualification courses and avionics training nationwide at his clients locations.