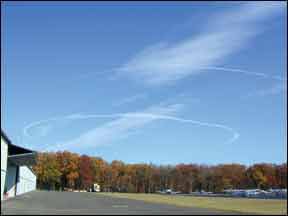 November 12345, cleared to Avsaf, hold east as published, expect further clearance at 1845.” Thats a typical clearance into a holding pattern for an IFR flight when ATC needs to “park” it somewhere until traffic or other conditions allow it to continue to its destination. A holding clearance usually isnt something a pilot or crew wants to hear, and they are much rarer in these times of flow control and ground delays, which are designed to minimize holding in the first place. But ATC still hands them out when needed, and FAR 61.57, Recent Flight Experience, requires regular practice in “holding procedures and tasks” to maintain currency.

For the most part, holding can be relatively simple: Fly to the fix and turn right. But

it also can get a bit complicated if the hold isnt published. And there are ways to avoid it entirely if youre willing to play ball with ATC and eliminate the reason for the hold. Lets explore.

The FAAs Instrument Flying Handbook, FAA-H-8083-15, defines holding as “a predetermined maneuver that keeps aircraft within a specified airspace while awaiting further clearance from ATC.” Another definition might be “boring racetrack-shaped holes in the sky while ground crews plow snow,” since closed runways at our destination are often the reason for a hold.

Regardless, each holding pattern clearance has three basic elements: the direction to hold from the holding fix, the holding fix itself and the “expect further clearance time” (EFC), the point by which ATC expects to either send you on your way or give you another EFC. If the hold ATC is giving you is published-depicted on a chart you should have in the cockpit-those three bits of information are likely to be the only clues ATC shares with you on where youre supposed to go, which way youre supposed to turn once established in the hold and how long youll be there. Thats fine, since you already should know the rest, including how to enter the hold, at what speed to hold, how long you should fly each holding-pattern leg and which direction to turn. If youve forgotten these basics, or need a refresher, the sidebar on page 14 highlights them for you.

All of which is for a standard holding pattern, i.e., one thats published. But we also can be sent into a holding pattern pretty much anywhere, depending on ATCs needs. When we get a non-published hold, we need more information than the three items previously mentioned.

A clearance into a non-standard hold also will include the direction from the fix in which ATC intends us to hold, the fix itself and an EFC time, just like a standard hold. But since the intended holding pattern isnt helpfully depicted on a chart, ATC also will provide the inbound course. This will be the radial, course, bearing, track, azimuth, airway or route on which the aircraft is to hold. Also to be specified by ATC in the clearance is the outbound leg length-minutes or miles, usually DME miles, but the pilot can request it in minutes or the controller may want it in minutes.

The direction to turn in a non-standard hold will be issued only if the controller wants you to turn left; otherwise, make right turns, just as if in a standard/published holding pattern. Finally, and as with the standard hold, you also should get an EFC time, perhaps along with any pertinent information on the reason for the delay.

Once weve entered the hold (see the sidebar on page 15 to help determine which of the three recommended holding pattern entries should be used and when) well likely be a bit busier than we were a few moments before. For one thing, well need to monitor our outbound leg timing to ensure were flying the prescribed hold. For another, well be making a roughly 180-degree turn as frequently as every minute. Finally, well need to monitor the winds effect on the pattern were flying.

Timing or measuring the outbound leg begins when we level the wings abeam the holding fix. In this case, “abeam” really means a position roughly parallel to the holds inbound course and headed in the opposite direction. The catch is-after the first lap around the hold-we should have a good idea of what the wind is doing to us and, using that information, plan to roll out of the turn to the abeam position after applying the appropriate wind correction. In other words, rarely will we roll out abeam the holding fix on the inbound courses reciprocal heading.

When turning at the end of the outbound leg, well also want to apply some wind correction, with the idea of rolling out precisely on the prescribed holding course. The amount of correction applied likely wont be equal to and opposite to what we applied in the turn to the abeam point. Why? Because the wind will be acting differently on the airplane at each end of the hold-we might have a tailwind going one way and a headwind the other, for example-forcing a different amount of correction as we roll out of the turn at each end of the pattern. In no case, however, should we alter the turn itself in anticipation of the winds effects-it should always be at standard rate, in the correct direction, of course, and designed to roll out on a heading which automagically applies the desired wind correction.

How do we know if weve applied the necessary wind correction? When we roll out of the outbound ends turn exactly on the holding course, thats when. If that happens, whatever you did on the last lap around the hold, keep doing it. As you fly the inbound leg, start planning the turn, the outbound leg and the turn after it.

Despite the higher workload a hold demands, we still need to be planning ahead. For example, we should already know the reason for the hold-traffic, weather, a gear-up incident closing the only runway at our destination, etc. Although we also should have an EFC time, those have been known to be extended-ATC is supposed to tell us when the delay is expected to extend beyond an hour or when a revised EFC is necessary.

According to the Instrument Flying Handbook, a clearance limit may not indicate which approach procedures will be used in a terminal area having a number of navigation aids and approach procedures. The IFH suggests ATC will advise the flight on initial contact, or as soon as possible thereafter, which type of approach you should anticipate. Even though its a busy time, getting that information and digging out the appropriate approach plate is one task you should consider while in the hold.

Of course, receiving a lengthy hold is sufficient reason to start exploring other options, in our book. For one thing, we need to evaluate our fuel situation. Of course, pulling back the power for best endurance is always good operating practice when holding. For another, racing around a holding pattern in IMC might be good experience, but wed prefer diverting to a nearby airport if it looks like well be a while getting to our destination.

The idea of thinking ahead in the hold also applies well before entering it. When ATC advises you to expect a hold or clears you to someplace thats not an airport, start thinking about your options. Again, a diversion is one of them. Slowing down is another good one-and our personal favorite-as is querying ATC about the reason for the hold and whether an alternate routing would make it unnecessary. These steps can eliminate the need for holding and-while perhaps not getting you to your destination any faster-might help minimize or eliminate the hold altogether.

Finally, and as much as we might want to, leaving the hold is possible only when ATC issues another clearance, we reach our EFC and have lost two-way radio communications, or cancel IFR when in VMC and proceed in VFR conditions.

Of course, modern ATC management techniques and improved surveillance means the hold is rather rare. That doesnt mean we shouldnt know how to enter, fly or depart one, however. Meanwhile, when the FAA revised FAR 61.57 a few years back, it added holds as a required IPC item, as well as one we need to track in our logbook or some other record to demonstrate IFR currency.

On the whole, wed rather avoid them by slowing down or going someplace else. But when we do get one, we take great pleasure in being able to fly them precisely, with appropriate wind correction and leg timing. You should, too.