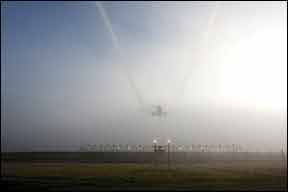 A crash occurring during an instrument approach almost always happens because the airplane descends below the published minimum altitude. Its easy for any pilot to say, “Id never do that,” and dismiss this brand of controlled flight into terrain (CFIT) as a non-hazard…at least for ourselves.

True, evidence suggests that some “ducking under” decision height, decision altitude or the minimum descent altitude is intentional-the pilot knowingly flies “just a little bit lower” to try to find the runway in the murk. But ducking under is not always intentional-a conscientious pilot may be susceptible to ducking under in some circumstances. The question is, how can we avoid the traps?

A Tupelov TU-154M carrying a delegation of dignitaries, including Polands President, began an instrument let-down to a Russian airport in below-minimums weather. While maneuvering for the approach, flight controllers queried the crew about its fuel state for a possible diversion to several alternates. Although the Tupelovs captain may have understood at least parts of the conversation, which were in Russian, its unclear whether any other crewmembers understood.

A second Polish airliner ahead on the approach suggested the Tupelov might be able to make it in, which possibly influenced the crew to continue. International flight rules permitted the crew to try despite the weather. More pertinent to the decision, however, there is evidence that a “large number” of high-level officials came on the flight deck and pressured the crew to press on to the original destination. Despite his own advice to the dignitaries that the flight should divert to an alternate, the crew was firmly directed to land.

“From that point on,” the crew was “exposed to a high level of emotional stress.” The procedure was flown much faster than normal, above glidepath, requiring the crew to establish a descent rate twice the norm for an approach. Terrain warnings activated and the aircraft continued its descent into the ground, the captain commanding a “panic” pull up just seconds before impact.

Although we like to think otherwise, in most cases passengers view pilots as order-taking chauffeurs, and expect airplanes to be high-utility devices that get them to where they want to go, when they want to get there. Non-pilots usually have little knowledge of the whys and hows of aerial transportation (just as most pilots have no idea of the inner workings of their passengers professions), so they will naturally insist on keeping to schedule…unless pilots educate them properly, and exercise command authority even in the face of job pressures. Its a balancing act, and pilots will lose jobs over last-minute no-go and divert decisions. Its up to us, then, to educate our passengers, to create reasonable expectations for aerial transportation before we have to face their pressure under adverse conditions.

We also have to remember who is in the captains chair. You take on the role long before youre strapped to the pilot-in-command seat. Everyone should know your primary job is to move passengers and the aircraft as safely as possible, and sometimes that means altering the schedule or the route to fit conditions. As an expert they should defer to your risk management decisions. The pilot who is constantly flying passengers against his or her better judgment would have a miserable life…for as long as it lasts.

The Boeing 737 was flying the localizer back course approach. Nearing the missed approach point, the first officer misidentified elevated lights along an interstate highway alongside the airport as runway lights; he vocalized “runway in sight,” which “influenced the captains subsequent misidentification of lights.”

The crew then turned away from the approach toward the lights, causing a full-scale deflection of localizer guidance, and began a descent that resulted in contact with four of the highway light poles. The captain then initiated a missed approach, and the flight later recovered at a former military airport about 90 miles to the west, where weather conditions were better.

The NTSB determined the flight crew had not adequately briefed for the approach, including failure to recognize the visual descent point (VDP) and failure to initiate a missed approach when seeing a full-scale deflection of localizer guidance, and the FAA check pilot evaluating the crews failure to intervene.

It takes discipline to fly an approach to near minimums. Part of that discipline is to remember course guidance points you to the airport, and in most cases, directly to the runway you intend to use. Another key point of discipline is to review the instrument approach chart before you enter the terminal environment. One element thats not frequently taught is to look at the approach charts depiction of the type of runway and/or approach lighting. Knowing what light pattern to look for, and the direction relative to the airplane to look, will go a long way to prevent confusion during the transition from instrument to visual flight.

While on a night instrument approach, a Beechcraft A36 Bonanza collided with the airports perimeter fence and terrain. The last radar plot was at an altitude of 1200 feet msl, slightly east of the runway and approximately 435 feet from the accident site.

The pilot was flying an RNAV (GPS) approach. The published minimums for the approach are a 400-foot ceiling (1287 msl) and one-mile visibility. The automated weather station reported calm winds, equal temperature and dew point, visibility less than mile in fog and an indefinite ceiling. An examination of the airplane failed to reveal any anomalies with the airframe, structure or systems. The pilots last transmission was, “Ive got the prison in sight, I know that, and its right there by the airport, I can see the lights at the prison.” Under the conditions at the time, the pilot appeared to have mistaken the east perimeter road for the runway landing point.

As with so many examples of aviation accidents, its the cumulative little things that can cause an otherwise excellent pilot to come up short. Similarly, there are any number of situations causing an otherwise good pilot to duck under a minimum altitude unintentionally. Forget to get the local altimeter setting, or get it but dial it into the little graduations of the Kollsman window incorrectly, and you may think youre altitude-aware when youre not. A little fatigue (notice how many duck-unders happen at night) can cause imprecision, placing the airplane off its glidepath. Poor visibility in daytime or at night-which goes hand-in-hand with at-minimums approaches-may obscure obstacles, or cause you to believe youre on course when you are not.

Glideslope control is a combination of following course guidance and flying the proper rate of descent to keep the needle centered. If you find yourself going high-or duck-under low-in the last hundred feet or so above decision height, its because the rate of descent was wrong. I tell my instrument students if they cant fly the last 200 feet of an ILS precisely, then the glideslope might just as well never been invented, because localizer-only minimums will usually take them as low as they are safely capable of flying.

Flying the equivalent of a contact approach (following references that are near the airport, but not part of the runway environment) is a greater error, especially at night, bordering on an intentional duck-under bust.

There is always an ace-of-the-base who prides him/herself on making it in when others cannot, or whose employer brags about the pilots skill and dependability in landing in the worst of weather conditions. Other pilots have a different name for such a pilot: an accident waiting to happen. I bet you know one at your home airport.

If the pilot is very, very good (and very, very lucky), it wont catch up with him/her for a long time. He or she may even complete an entire career without killing anyone. But statistically its not likely. Do you know someone who tried to duck under bad weather conditions and died in the process? I bet you do. I certainly do.

Can we do anything about the intentional bust? Probably not. Our aviation culture is firmly rooted in its reverence for the risk-taker. It may take a complete generation of instructors teaching their students to use better judgment-and time for Darwinian selection of the existing pilot cadre-to make a difference. It probably wont happen. What can happen, however, is that I can resolve avoid making intentional duck-under busts. And as an instructor I can foster a safety attitude in my students. From there, its a matter of personal choice for the pilots…and the ramifications of those choices on passengers, people on the ground and public acceptance of aviation.

There is Good News

“Ducking under” to try to land out of an instrument approach may be an intentional act. Far more frequently, its a matter of external stresses, fixation on a mission, a manifestation of confusion or simply the result of cumulative little errors that take us below decision height, decision altitude or the minimum descent altitude. The good news is that means we can actively work to avoid duck-under accidents.