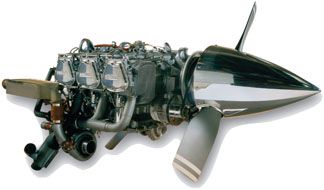 Theres nothing like replacing an old, tired piston engine for a new or overhauled one. Hopefully, you chose the most power you could find for the money, and youre just aching to try it out. By this time, the planes been laid up for a few weeks while the work was performed, and this is your first shot at flying the familiar bird in way too long.

Whether the engine is new, freshly overhauled, or merely sporting a brand-new set of cylinders after a top-end overhaul, it needs to be broken in. That means using the manufacturers recommended oil and procedures. Why? Because the piston rings need to be properly seated in the cylinder bores. Since theres really not that much going on in the engines bottom end, anyway, we need to focus on the top. Performing a good, quick break-in procedure on a new set of jugs saves major headaches-and dollars-down the road. Theres also the peace of mind from knowing that much more about your engine.

Planning
To ensure a good break-in, the one thing youll need in the greatest quantity is time: Time to plan the initial flights, time to thoroughly inspect the airplane and time to actually do the unhurried, concentrated flying the situation demands. The last thing you want to do is pick up an airplane sporting a fresh engine with the pressure of keeping a schedule or needing to be somewhere else. While much of this article is written with the piston single in mind, these tips apply to multi-engine piston airplanes, too.

The next thing you need is a relatively calm day at an airport with plenty of runway. Hopefully, you had the foresight to factor in this runway requirement when you selected an engine shop.

After those two items, you also need a plan, preferably constructed as a checklist. It should include the aforementioned detailed inspection, completion of the necessary paperwork to satisfy the FAA and the insurance company, plus some thought as to where and how the first flights will occur.

Generally, you want the very first flight to be one circuit around the traffic pattern, followed by a full-stop landing. Even though all the hoses were tight, and even though a static run-up revealed no leaks, theres simply no way to determine if everything under the cowling will stand up to the air loads imposed by an actual flight.

But this is where you need to be spring-loaded for an abort. Once youre rolling for takeoff, advance the power slowly but smoothly. Closely monitor the engine gauges and airplane performance instruments to ensure youre developing full power and that the airplane is responding as it should. If anything looks unusual, pull off all the power and abort the takeoff. No exceptions.

Before even taking the active, though, you need to come up with an abort plan. It should consist of three phases, depending on where you decide to abort. For example, if youre still below lift-off speed, what you do next is a no-brainer: Dont take off. If youve already broken ground, but theres plenty of runway remaining, pull off all the power, leave the airplane in its takeoff configuration and land. At a towered airport you might want to share with the controllers-by telephone, before starting the engine-what youre doing and what youre planning.

Once youre airborne and theres not enough runway remaining to land and stop, youre committed. As part of your planning, you will have decided on a point-of-no-return. This is the point at which, if the engine fails, you and the airplane will be making an off-airport landing. Of course, you do this for every takeoff-right?-but this is one occasion when you really need to get this firmly decided in your own mind before applying takeoff power.

Make a normal takeoff-performance should be good, since the airplane will be light-and climb to the pattern altitude. Stay close to the runway-use steeper-than-normal banks, if necessary, so you can glide back to it if needed.

The only thing you should be worried about on this circuit is getting the airplane back on the ground, so dont make too many configuration changes and dont get distracted. Make a normal (for the airplanes weight) pattern and landing, then taxi back to the engine shop and shut down. You and the mechanic want to inspect the engine again, to look for leaks and other stuff.

The First Flight
You might consider that little jaunt was the first flight, but the first real flight is yet to come. Airspace and traffic considerations permitting, the next flight will be longer, but should still be over the airport-or to one nearby where you can orbit above pattern altitude. The idea here is to set up a longer flight in close proximity to an adequate runway and fly the engine enough to ensure everythings working.

Again, plan and make the kind of takeoff we just described and, if youre staying over the departure airport, fly the basic pattern but keep climbing.Youll want to be something like 1000 feet above the normal traffic pattern, which means 2000 feet agl at most airports. If you must go to another, nearby airport, climb as high as feasible and head directly there. During what is hopefully a short flight, this is a good opportunity to play what-if games and keep a sharp eye out for emergency landing areas.

Regardless of whether you remain over the departure airport or transition to another one, you want to plan to circle the airport for 30 minutes or so-enough time for engine temperatures to stabilize, for fresh oil to circulate throughout the engine and for any possible leaks or loose components to show themselves.

As discussed in the sidebars accompanying this article, you should be performing this flight at a high power setting, so youll be fast. Deal with it. Dont put unnecessary stress on the airplane, but keep the power up. As long as the fuel flow and cooling are adequate, you wont be hurting the engine.

Fly this profile for 30 minutes or so, then slowly reduce power and descend back to pattern altitude (or transition back to your departure airport) and land. Once back on the ground, you and the mechanic will want to perform another full inspection.

During this flight, youll have more time to monitor the engine gauges.Make some notes of their indications-you do have some baseline readings from the old engine, right?-including fuel flow, oil temperature, CHT/EGT values, manifold pressure and rpm. If everything looks good, youre ready for the actual break-in flight.

Doing It
Your first two flights were really test flights to ensure the engine and under-cowling components will work and play well together. For this next flight, youll want to plan some kind of route that brings you back to the departure airport but which lasts a couple of hours. For a normally aspirated airplane, you want to be at a relatively low altitude. If youre turbocharged, you want to be below the engines critical altitude.

In both instances, this is so that a high power setting can be maintained.As the sidebar at the end of the article highlights, the objective here is to seat the piston rings. Thats really what this is all about, and you need high power settings to accomplish this goal.

Once youve decided on a route and altitude, take off as you did twice previously. Execute climb to your cruising altitude in a flat attitude-you want maximum cooling-and follow your planned route.

This flights objective is to actually seat the rings, thereby completing the cylinder break-in process. If you have a multi-probe engine monitor-and why dont you?-you can monitor progress by watching the EGT values. If youre doing this correctly, i.e., at a high enough power setting, you should see all CHT values start out relatively higher than they were with the old engine. Then, after an hour or so, they will start to drop, one by one, back down to more nominal readings. When all cylinders have dropped down from their higher, initial readings, its Miller time-your cylinders are broken in. Go back to your home base, land and take the rest of the day off.

Thats not to say you can merely kick the tires and light the fires as a pre-flight inspection on your next flights. You still want to monitor oil consumption-and perform an oil change before accumulating 10 or so hours on the new engine-but it does mean you can begin to operate the engine as you normally would-including cruise at lower, more economical power settings.Youll still need to take close and frequent peeks under the cowling, but the big stuff is done. Congratulations.

The first few hours of operating a new, overhauled or freshly topped engine require some thought, some planning and some different operating practices. As always, safety is key. Do things methodically, comply with the manufacturers recommendations and ensure the airplane is ready for normal service. Enjoy your new engine.

Also With This Article
“Under Pressure”
“What The Manufacturers Say”
“Checklist”