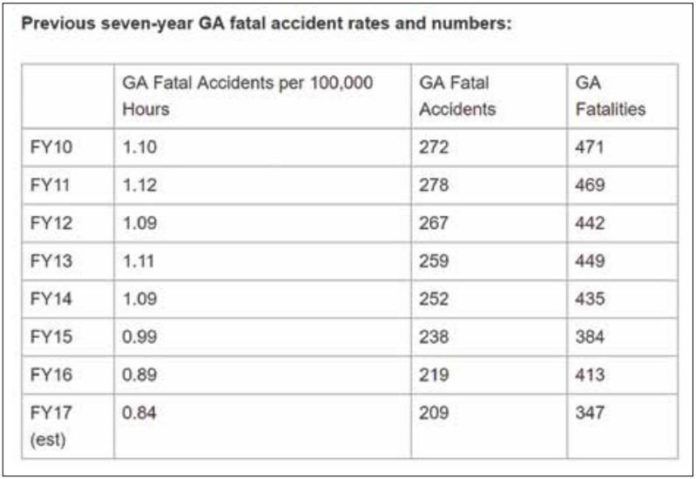 The long-term outlook for general aviation through 2038 is “stable to optimistic,” according to the FAA’s recently announced Aerospace Forecast 2018-2038. Specifically, the FAA estimates the general aviation fleet will increase from “213,050 aircraft in 2017 to 214,090 in 2038, growing an average of 0.0 percent a year.” The flat growth results as expected steady growth in turbine aircraft meets similar declines in fixed-wing piston aircraft.

The agency believes the relatively small number of turbine aircraft will grow at an average of 2.0 percent annually over the forecast’s 20 years, versus the projected 0.9 percent decline in the greater number of fixed-wing-pistons. General aviation hours flown, meanwhile, are forecast to increase from 25.4 million in 2017 to 30.2 million in 2038, an average annual growth rate of 0.8 percent per year.

The FAA also expects demand for tower, approach control and en route ATC services will increase, averaging between 0.9 and 1.4 percent each year. Other industry segments, including unmanned aircraft systems (UAS), airline passenger enplanements and revenue passenger miles, are forecast to increase steadily during the 20-year period.

According to the FAA its aerospace forecast “is the industry-wide standard of measurement of U.S. aviation-related activities” and is based on, among other data, “generally accepted economic projections, surveys and information sent by the airlines to the DOT.”

Separately, the FAA noted a slight increase in general aviation flight hours, “partially due to strong numbers in the turbine/jet segment of GA, which reverses trends the agency has seen over the last few years.

The NTSB in February published the latest in its series of “safety alerts” for general aviation operators on how weight and balance calculations are critical to determining aircraft performance. The board highlighted several recent accidents resulting from over-gross operation, especially in high density altitude conditions. The safety alert is available right here. Highlights from the publication are below.

• Know your aircraft’s limitations and the factors that can affect its performance.

• Conduct takeoff and landing distance calculations as part of your preflight planning. Account for fuel burn during flight.

• Account for atmospheric conditions throughout your flight and include them in all your performance calculations.

• Even if an aircraft is within its allowable gross weight, it may be loaded outside of its CG limits.

• Do not “guesstimate” passenger and cargo weights.

• Ensure the basic empty weight and moment data used in your calculations match the specific aircraft. Don’t use sample data.

• Remember that aircraft performance can only be determined after the gross weight is computed.

• Professional flight crews do these computations routinely. You should strive for professionalism as well when you are planning your flights.

The NTSB has been doing a series of posts on its blog to update observers on progress toward the policy objectives on its latest Most Wanted List (MWL). It should not surprise you to learn issues of interest to aviation generally and general aviation specifically are on the NTSB’s MWL. The update came in the form of a post by NTSB Member Earl F. Weiner, a former Boeing executive and current flight instructor, and Bonanza owner. The short version is we’re making progress on the NTSB’s priorities, but there’s still work to be done.

Weiner noted the general aviation industry seems to be addressing the NTSB’s longstanding concerns regarding accidents resulting from pilots losing control of their aircraft (LOC): “The number of LOC and fatal LOC accidents are both trending down as of 2016, our last complete year of data.” He pointed to recent changes to FAR Part 23, which regulates the certification of small aircraft, as reform hopefully fostering greater innovation.