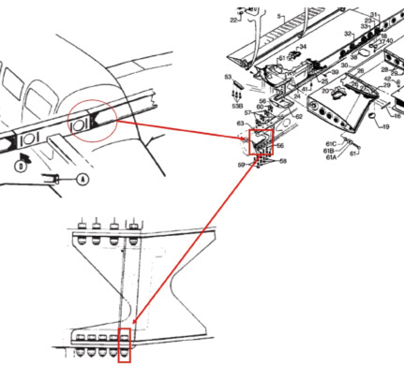 The April 4, 2018, crash of a Piper PA-28R-201 Arrow V operated by Embry-Riddle Aeronautical University (ERAU) continues to have repercussions. Most recently, the FAA has published a proposed airworthiness directive (AD) that would require inspecting each main wing spar of a wide range of Piper airplanes. The proposed AD is a response to the ERAU crash, which involved the inflight separation of the Piper Arrow’s left wing. Both aboard died and the airplane was destroyed.

During its investigation, the NTSB found “more than 80 percent of the lower spar cap and portions of the forward and aft spar web doublers exhibited fracture features consistent with metal fatigue. The fatigue features originated at or near the outboard forward wing spar attachment bolt hole.” The NTSB’s investigation included examining a second Piper Arrow, one that “had a similar number of total airframe hours and cycles and was used exclusively for flight training of students.” That examination revealed a crack at the left lower outboard forward wing spar attachment bolt hole similar to the accident airplane.

According to the proposed AD, owners/operators of affected airplanes would be required to at least perform research to determine if the airplane had a “service life of 5000 hours, has had either main wing spar replaced with a serviceable main wing spar (more than zero hours TIS), or has airplane maintenance records that are missing or incomplete.” Airplanes meeting those conditions would be subject to the AD’s eddy current inspection requirements. The agency estimated the eddy current inspection and reporting would cost $380 per airplane. Repairs, if necessary, would run $8260 per wing spar, according to the agency.

An FAA Safety Alert for Operators (SAFO 18014) published in response to an NTSB safety recommendation provides guidance on identifying and manipulating trim and autopilot circuit breakers during abnormal and emergency situations. According to the SAFO, there have been “several fatal accidents” typically involving the autopilot “in which the pilot was unable to identify and pull a circuit breaker…during an abnormal or emergency situation.” (See the article beginning on page 8 of this issue for a general discussion of trim and autopilot failures.)

The SAFO notes that “there are some failures (shorted relays, wires, etc.) that remove control of the servo actuator from the control unit itself. In those instances, the pilot must find and pull the circuit breakers that interrupt power to both the trim and autopilot systems…. It is important to understand that all functions and equipment associated with a circuit breaker are lost if that circuit breaker is disabled. In too many cases, a circuit breaker installed in an aircraft supplies power to more functions than the label implies.”

According to the FAA, “Essential skills that should be trained and practiced include:

1. Location and identification of circuit breakers that need to be pulled during abnormal or emergency situations;

2. Proper preflight and ground check of the Flight Director/autopilot system; and

3. Demonstration of all methods used to disengage and disconnect an autopilot.”

Due in part to the year-end holidays, industry response to the FAA’s December 21, 2018, publication of the proposed AD has been muted. The AOPA said it had been closely monitoring developments associated with the April 4 accident. “Ideally, AOPA would have preferred that the FAA start this process with an airworthiness concern sheet (ACS), as it has in the past, to solicit information from aircraft operators, owners, and mechanics before initiating rulemaking,” AOPA Senior Director of Regulatory Affairs David Oord said. “However, we appreciate the agency’s development and application of a formula to calculate factored service hours to target the AD to only aircraft that were subjected to repeated high-load operating conditions. As a result, we expect that the inspections will ultimately be required for only a portion of the affected aircraft.”

“As this is still a proposal for an airworthiness directive, it is very important to carefully review the FAA’s proposal to see if it first properly meets any safety considerations, while at the same time ensuring that it does not unnecessarily burden affected aircraft owners and operators,” EAA CEO and Chairman of the Board Jack J. Pelton said in a statement. “We will be closely working with experts on these aircraft in the coming weeks to review the proposal. After that review, EAA can knowledgeably determine if specific comments should be made to the docket on behalf of our members.”

The FAA established a 45-day comment period on the proposed AD, which closes about the time this issue will reach you: February 4, 2019. Interested parties may obtain a complete copy of the proposal online attinyurl.com/PiperAD. Comments to the FAA may be made electronically to an address published in the proposed AD.