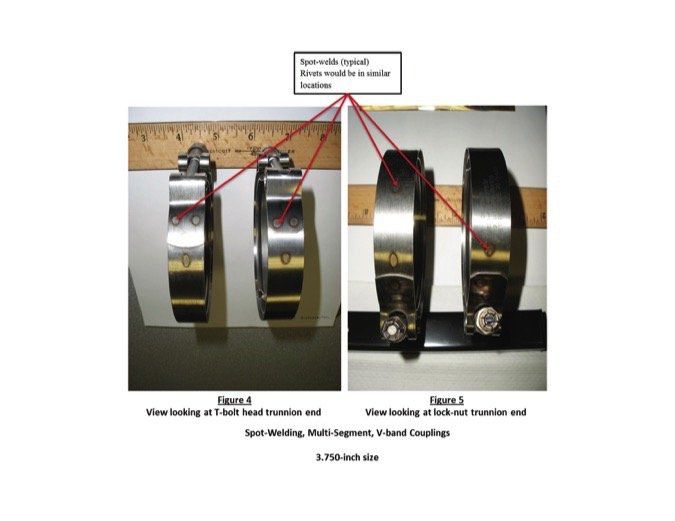 The V-band clamps used to assemble exhaust systems on turbocharged piston-powered airplanes have long been a source of concern to operators, maintainers and regulators alike. Clamp failures resulting from lengthy service and improper installation can allow extremely hot and high-pressure exhaust gases to be directed onto other engine-compartment components and risk an in-flight fire.

The clamps have been implicated in numerous accidents dating from the 1970s, many of which involved fatalities. The problem potentially affects some 18,000 turbocharged aircraft in the U.S. fleet from various manufacturers, including some still in production, as well as normally aspirated aircraft modified with a turbocharger installation under a supplemental type certificate (STC).

As part of its charter to help minimize GA accidents, the General Aviation Joint Steering Committee (GAJSC; see the article beginning on page 4 for background) earlier this year published a “Best Practices Guide” designed “to ensure airplanes equipped with turbocharged reciprocating engines fitted with turbocharger to tailpipe V-band coupling/clamps, remain in their original type design configuration. It will also help to effectively manage the risk associated with the use of V-band coupling/clamps in this application.”

The 36-page document is available in Adobe’s Portable Document Format (PDF) free for the download from the FAA’s web sitetinyurl.com/SAF-clampsandis a product of the GAJSC’s study of accidents resulting from powerplant failures. That study found “fatigue cracking at spot welds that led to exhaust leaks which then propagated into inflight fires and powerplant failures. In some cases the V-band clamp cracking was due to improper installation and in other cases corrosion.”

According to the Best Practices Guide, one of the challenges facing operators and maintenance personnel is accessing the turbocharger assembly and the V-band clamps for proper inspection. Some aircraft require complicated and time-consuming bottom cowling removal before the entire turbocharger system can be closely inspected. Although turbocharged multi-engine airplanes often allow easier access than singles, both can be problematic since numerous fleet-wide variations exist, including top- and bottom-exhaust designs. In addition to overall inaccessibility, heat shields and other components may make a detailed preflight or scheduled inspection problematic, “even with a mirror and bright light,” according to the Guide.

The GAJSC’s Guide presents a detailed description of the various types of turbocharger installations and the different clamps and couplings employed, including the characteristics of spot-welded and riveted components. As its full title implies, it also includes a series of cautionary advisories—best practices—for technicians to consider at each step of a turbocharger or clamp installation, including in-situ inspection, bench examination and reinstallation. A list of unsatisfactory conditions also is included, with the caution that technicians “should always remove the coupling/clamp for a more detailed examination” if its condition is suspect for any reason.

Repetitive inspection and life-limit recommendations contained in the Guide include:

• Annual inspection of the coupling/clamps as described elsewhere in the Guide.

• Single-piece V-band clamps should be life limited to 2000 hours total TIS, with no extensions permitted.

• Coupling/clamp life limits are applicable to only one engine/aircraft installation and coupling/clamps should not be swapped between engines or aircraft, or re-used in any other aircraft application.

• Upon finding any unsatisfactory conditions per the Guide, the coupling/clamp should be considered unairworthy and be replaced prior to further flight with a new FAA-approved coupling/clamp.

• Satisfactory completion of any inspection should not alter or terminate any repetitive inspection, or restart the hours TIS for any coupling/clamp.

• Any coupling/clamp that passes inspection should only be reinstalled on the same aircraft, engine, tailpipe and turbocharger combination from which it was removed.

• Any V-band coupling/clamp removed from service should be permanently destroyed and not used on any other engine, aircraft or other aircraft application.

The FAA in July published a Special Airworthiness Bulletin (SAIB SW-18-19) advising “owners and operators of possible misleading heading and attitude displays when activating electrical equipment, especially electrical equipment that draw high electrical currents.” The SAIB was occasioned when an aerial application operator noticed electromagnetic interference exhibited on an Aspen EFD 1000 after energizing an underwing work light system. The cause of the interference remains under investigation.

An overhaul to the San Francisco Class B airspace configuration was set to go live with the charting cycle effective August 16, 2018, after this issue was finalized. The new design eliminates the familiar inverted wedding cake in favor of polygons marked with an expanded set of VFR waypoints designed with an eye to facilitating navigation underneath the affected airspace by GPS. The redesign effort has been in the works since 2015 and was the subject of a recent rulemaking.

Regardless, it may take operators in the SFO region a while to become accustomed to the new changes. According to AOPA, “some aspects of the proposal failed to meet FAA airspace requirements, and the association urged the FAA to ensure compliance to avoid excursions from Class B airspace, which pose ‘an operational issue and safety hazard.'” The association told the agency that “Class B general design guidance provided in 15-2-3 of FAA Order 7400.2 ‘is largely not followed by this redesign with positive and negative implications.'”