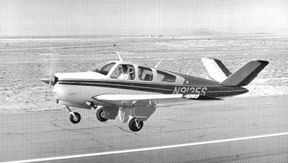 At times, instrument flying can be easier than VFR flying. You dont have to worry as much about routing or clearances through special use airspace because your clearance and the controller take care of it for you. Traffic scans are similarly simplified, particularly when flying in areas of widespread instrument conditions.

Fact is, there are many instrument pilots who approach IFR flying like that stereotypical 1950s Sunday drive. They check the weather, file a flight plan, pick up a clearance, follow the clearance, shoot an approach and land. Simple stuff, this instrument flying.

It requires no contingency planning and no proficiency training. You know the airplane works because it worked when you put it away last time and youre the only one who flies it. After a few years and a few hundred hours, the airplane is a comfortable place to be, with no surprises left anymore. A trip in the airplane is like a trip in the family minivan.

Although this oversimplifies the approach most pilots have toward IFR flight, there are those who leave a legacy that suggests such a cavalier approach.

One such pilot was the owner of a Beech Bonanza, a 1961 V-tail hed bought in 1992 – eight years before his final flight.

The Trouble Starts
The airplane departed Caro, Mich., at 10:21 eastern time on an IFR flight to Newport News, Va. – a 500 nm trip. Cruising eastbound at 9,000, the flight was unremarkable for the first two hours. As the pilot flew along Victor 38, which travels generally southeast, he was handed off from one Washington Center controller to another.

Just after the pilot checked in, the new controller issued an ominous instruction. Uh, turn left heading 180, now. 180. Looks like youre tracking westbound.

Although the pilot had been given the current altimeter setting a minute earlier, the controller noticed the airplane was 300 feet high and reissued the altimeter setting. He asked the pilot if he was ready for the vector, to which the pilot responded, Its gonna have to be a compass heading, I guess. My gyro is, uh, uh, going round and round.

OK. Ill give you, uh, Ill tell you when to start and stop your turn if you want to do that. Can you navigate off of anything? the controller asked.

As long as we stay on top we can. Whats the, uh, has anybody got any, uh, broken conditions south of here?

As the pilot stood by, the controller attended to some other airplanes. An airliner on the frequency volunteered the fact that Charlottesville was reporting broken at 4,200. The controller checked quickly and found two other nearby airports were reporting overcast. When he relayed the information to the Bonanza pilot, the pilot responded that he needed a heading for someone thats broken.

The controller told the pilot to steer 175 degrees for Charlottesville and promised to be back up shortly with a more comprehensive look at the weather.

Nearly two minutes passed until the controller broke the silence. So, uh, you have your gyro back [or] you just want to go to the closest airport with a broken ceiling. Is that the way I understand it?

I do not have my artificial horizon, my gyro, the pilot replied. I got the compass and the airspeed indicator.

Thats the closest place? Yeah, the pilot said. I, uh, I have to stay on top cause I havent got my artificial horizon.

The controller offered the pilot the option of broken ceilings behind him, or even better broken conditions farther ahead, but the pilot had apparently latched on to Charlottesville as the solution. His communications were beginning to show the strain, with more uhs punctuating his transmissions.

Alright, just stay on this heading and, ah … uh, so till something shows up, uh, long as I can stay on top I can, uh, uh, keep the damn thing right side up cause I lost my artificial horizon, he said.

The controller gave the pilot leeway on altitude, telling him to just do the best he could in holding 9,000 even though he was at 9,800 at the time.

The pilot said he was still trying to determine which of his instruments he could rely on, then he said, Its starting to open up here right now, apparently believing the cloud layer beneath him was becoming broken. He was 50 miles from Charlottesville.

The controller asked the pilot which equipment was malfunctioning and what was working. The pilot reported the gyro or the suction pump was likely malfunctioning because his attitude indicator had failed. He said the directional gyro was inoperative but that the GPS, altimeter and airspeed indicator were working. He did not mention the turn coordinator.

The controller asked if he wanted to descend, and the pilot deferred, saying any place thats open.

The controller said he had no information on the cloud tops and asked if it looked like hed be able to descend. Right now Im pre … Im almost … Im in the clouds right now, the pilot said.

The controller immediately cleared the flight to 11,000 feet and told the pilot he was declaring an emergency. He gave the pilot clearance to go to whatever altitude he needed to remain on top. The pilot acknowledged.

Two long minutes passed. The pilot asked what his mode C altitude readout was, apparently having trouble trusting his equipment. The controller responded the mode C signal was coming and going, but that he was at 9,700 the last time the encoder reported.

Im showing myself on an easterly heading. All my instruments have just gone haywire.

There were no more transmissions from the airplane.

Air Tricks
Analysis of the airplanes radar track shows that the airplane was flying essentially straight for the destination until just before he reported being in the clouds. Perhaps he was deviating around buildups, trying to stay in the clear, or perhaps he let his heading wander as he struggled against the airplane that had for so long been his friend.

Two witnesses on the ground said they were watching the Bonanza doing air tricks. They both reported seeing the airplane break into pieces as it raced toward the ground.

The wreckage was scattered along a debris field 4,100 feet long. At the beginning of the debris was a section of the left ruddervator, a seat cushion, a red sweater stuck in a tree. The right ruddervator and stabilator, as well as the stabilator from the left side, were not located. The control yoke was found 600 feet northwest of the fuselage. Part of the left wing was found 400 feet southwest of the main wreckage; the right wing was 550 feet south.

Detective Work
Further investigation revealed one source of the flights demise. The vacuum pump drive shaft had sheared when two of the carbon vanes fractured, jamming the pump and shearing the drive as the engine continued to try to turn it. The attitude indicator and directional gyro had indeed spun down, just as the pilot had reported.

Analysis of the turn coordinator showed that it, too, was inoperative at the time of the crash, although the source of the malfunction was not detected.

But even more troubling was the pilots logbook. He had accumulated more than 1,500 hours total time, although the actual total was uncertain because the last flight he had entered in his book was dated June 14, 1998. At that time, he reported 89.4 hours of actual instrument time.

The only subsequent entry in the logbook was a flight review on Nov. 29, 1999, five months before the accident. The last actual instrument time the pilot logged was in 1997, and his last instrument check had been five years prior to the accident.

Just why the pilot stopped logging flights remains a mystery. While its true you dont need to log anything except flights that show currency, he didnt even do that. The fact that his mid-1998 entry followed by the late 1999 flight review indicates there is not a missing logbook, unless he started recording it on a computer and the flight review is entered manually because it was made by an instructor.

The puzzle pieces, however, combine to make a picture of a pilot who had lost the sense of how unforgiving aviation can be. The airplanes maintenance records make no mention of a vacuum pump replacement, for example, but the fact that it was nearly 40 years old and had more than 4,500 hours time in service make it unlikely the pump was original.

The pilot never mentioned the failure of his turn coordinator, although he did mention his airspeed indicator and altimeter. Had he dropped it from his scan or had it been inoperative for so long hed gotten used to not using it?

Finally, the pilot continued on into clouds when he knew it would be partial panel, rejecting either a climb that was well within the airplanes capabilities or a turn around to better conditions behind him. That he flew partial panel for a few minutes in the clouds is colored by the fact that his course varied wildly. He was obviously behind the airplane.

Safety requires that any venture that takes you to heights above the ground from which you cant jump be taken very seriously – whether its washing second-floor windows from a ladder or venturing into the flight levels. Familiarity can breed complacency, and complacency sows only the seeds of disaster.