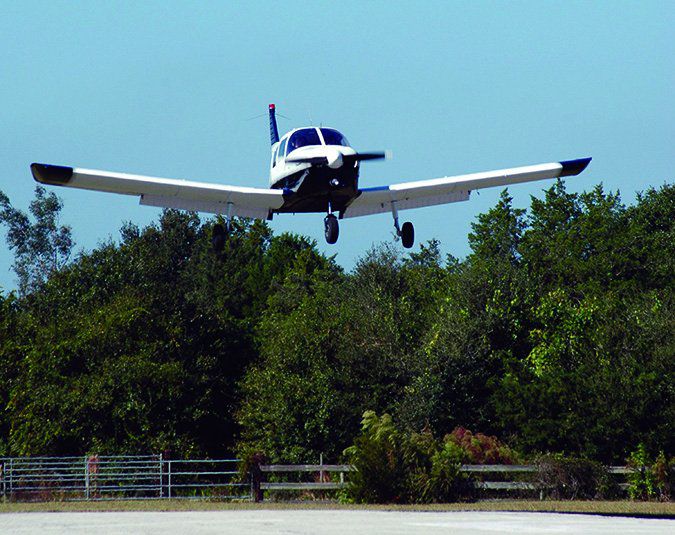 If you were investigating a runway overrun mishap—to discover precisely what led to the accident for the sole purpose of helping other pilots avoid similar events in the future—where would you focus your attention? What might be the deciding factor? What one thing would have broken the accident chain and prevented the crash?

Any number of possibilities might come to mind: braking action, landing hot (too fast), landing long (touching down farther along the runway than optimal), even factors like pilot fatigue. In the final analysis, the one critical factor in almost all runway overruns is the aircraft was not in the slot in the seconds before touchdown.

By “the slot,” I mean a position on short final where all the conditions are set for arrival. Although the precise altitude may vary, let’s use 500 feet above field elevation (AFE) for both visual and IFR approach procedures. As your airplane passes through 500 feet AFE, it should satisfy several conditions to safely continue to a landing. When met, I call these collective conditions being “in the slot.”

Of course, airspeed must be on target. Generally this will be 1.3 times the stalling speed (VS0) in the airplane’s current configuration and at its current weight. This may be a computed or tabulated indicated airspeed from the AFM/POH.

If an angle of attack (AoA) sensor is installed, it must indicate the airplane is on target. If the AFM/POH calls for flying a specific AoA on short final, or an approved aftermarket AoA device contains specific indications to attain on short final, then this becomes a condition for being “in the slot.” If you fly a supplemental AoA indicator (i.e., it is not approved by a type certificate or supplement), you may use the approximate AoA pattern that correlates to being on the proper airspeed in 1G flight when passing through 500 AFE.

In addition to airspeed and/or AoA, the airplane’s attitude must be correct for the type of landing being performed (i.e., normal or short field). Pitch attitude, whether visually out the windows or as depicted on an attitude indicator, will be consistent for a given indicated airspeed and/or AoA at a given center of gravity location and airplane configuration (flap and landing gear position).

Airplane configuration is correct for landing, with the gear in the correct position and wing flaps set. The before-landing checklist must also be complete, precluding any last-second monkey motion in the cockpit and allowing you to concentrate on the touchdown.

Engine power should be as expected for the landing. The standard equation we all should have learned in primary training applies here: attitude + power + configuration = performance. In this case, performance results in the proper combination of indicated airspeed and vertical speed at the correct power or thrust setting.

The airplane needs to on glidepath and aimed to a landing in the runway’s touchdown zone. This is usually 1000 feet from the runway threshold or one-third of the total usable runway length, whichever is shorter. In the case of a short-field landing, the pilot may have to use a touchdown zone closer to the arrival end or the runway, using great care to avoid coming in too short or too low over obstacles in the final approach path.

As we evaluate where we are relation to the glidepath and, therefore, the slot, the airplane’s vertical speed must be on target to carry the airplane from 500 AFE to the touchdown zone.

If any of these variables is off on short final, you are not “in the slot” and there is increased risk of a runway overrun. Don’t try to salvage the approach: Power up, go around, re-enter the pattern and try for greater precision on another attempt. Or divert to another runway or airport, if conditions are such you cannot get in the slot next time around.

Slipping Out of the Slot

Multiple factors can contribute to a runway overrun event. These three incidents from the NTSB’s files serve to remind us you must take them into account every time you land an airplane:

– A Cessna Citation CJ’s pilot was attempting to land on a relatively short (4000-foot-long) runway at a residential airpark. Witnesses report the Citation’s wheels touched “about halfway down” the runway. The pilot could not get the jet stopped on the remaining runway; the Citation rolled off the departure end of the runway and down a small incline, coming to rest in a golf course water hazard. The pilot was able to keep the airplane upright, and all three occupants of the Cessna jet escaped unharmed.

– While returning to the departure airport, the Cessna 210’s pilot obtained an instrument clearance and was vectored to an RNAV (GPS) approach. Witness, pilot and passenger accounts indicate the airplane was left of course when it broke out of the clouds. The pilot landed the airplane about halfway down the wet runway with some seven knots of tailwind and 40 degrees of flaps extended. The pilot was unable to stop the airplane. It overran the end of the runway and impacted rising terrain.

– The pilot of a Piper Seneca maneuvered the airplane on a higher-than-normal approach to avoid tall trees located in the runway’s approach path. The airplane touched down at an excessive groundspeed and began to veer left. The pilot attempted to regain directional control with rudder control and brakes, but the airplane continued off the left edge of the runway, impacted a culvert, nosed over and came to rest inverted.

If we agree that a safe landing requires the pilot has the airplane in the slot on short final, then what does he or she need to do to get the airplane in it and keep it there?

In a briefing note published in 2000, The Flight Safety Foundation’s (FSF) Approach-and-landing Accident Reduction (ALAR) Task Force found that unstabilized approaches were a causal factor in 66 percent of 76 approach-and-landing accidents and serious incidents worldwide from 1984 through 1997. The FSF Approach and Landing Accident Reduction (ALAR) Briefing Note 7.1—Stabilized Approach nods to the fact that “stabilized” means different things to different operators, saying,, “An approach is stabilized only if all the criteria in company standard operating procedures (SOPs) are met before or when reaching the applicable minimum stabilization height.”

FSF’s Briefing Note, summarized above, calls unstabilized approaches those “conducted either low/slow or high/fast.” It provides a recommendation that the airplane be stabilized within 1000 feet of the ground in IMC or 500 AFE in VMC. Meanwhile, the FAA Airplane Flying Handbook (AFH, FAA-H-8083-3B) provides this definition of the stabilized approach: “A stabilized approach is one in which the pilot establishes and maintains a constant-angle glidepath towards a predetermined point on the landing runway … the point on the ground at which, if the airplane maintained a constant glidepath and was not flared for landing, it would strike the ground” (emphasis in original).

The AFH is giving us a small airplane (12,500 pounds maximum weight or less) concept of what it means to be “stabilized.” The AFH’s diagram (see the graphic on the next page) shows how an approach may be flown stabilized to the point where the flare begins. Note this definition and this figure say nothing about airspeed—an airplane may following a constant angle of descent to the touchdown zone and still be too fast, meaning it will float excessively once the pilot begins the flare, and will likely land long, as depicted above. The airplane also could be coming in too slowly, setting the pilot up for a hard landing when flaring increases AoA enough to stall or reducing control authority to the extent a normal flare at that slow a speed is problematic. So a constant-angle “stabilized approach” glidepath is only one part of being “in the slot.”

As Aviation Safety reported in the April 2016 issue, the FAA begins the transition away from the decades-old practical test standards for checkride guidance to the new airmen certification standards (ACS) beginning in June. The transition began with the private pilot and instrument-airplane checkrides. In both cases the list of areas and tasks detailing the ACS has not changed significantly.

What’s new is the examiner’s very subjective evaluation of the applicant’s risk management and decision-making strategies while accomplishing each task. The private pilot ACS specifically requires demonstrating “understanding of…stabilized approach and interpretation and use of visual glide scope [sic] indicators.” The applicant also is expected to demonstrate maintaining “a stabilized approach and recommended airspeed, or in its absence, not more than 1.3 VSO with wind gust factor applied +10/-5 knots, or as recommended for the aircraft type and gust velocity.”

The ACS may be obliquely referring to the incomplete definition of stabilized approach contained in the AFH, but the ACS appears to be saying you can substitute the glidepath-defined stabilized concept with an airspeed-defined approach that does not reference glide path information. The reality is that if you are to avoid landing hazards you need to focus on both airspeed and glidepath. You need to be in the slot.

• Predicting aircraft performance by using a consistent technique every time.

• Increasing situational awareness, by allowing the pilot to focus on instrument or outside references, as appropriate to conditions, instead of diverting attention to changing trim, power and configuration settings during final approach.

• Landing in the touchdown zone at the proper speed to ensure landing performance.

Common accidents where a stabilized approach is not flown include controlled flight into terrain (CFIT), landing short, landing long and running off the far end of the runway, and stalls.

Remember: There’s a reason we use the word “salvage” when we say “don’t try to salvage a bad approach.”