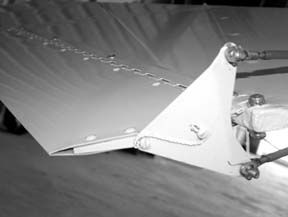 Aircraft trim is, in some pilots minds, the red-headed stepchild of control surfaces. Its a nice-to-have feature, but hardly something you cant do without. That is, until it goes bad.

Misadjusted trim makes you work harder than you have to. If elevator trim is set wrong, youll certainly have difficulty maintaining altitude. Incorrect rudder trim can lead to a heavy wing and fuel feeding unevenly if your airplane has a both fuel setting.

Malfunctioning trim poses a much more serious problem – serious enough that it can cause a loss of aircraft control. Take, for example, the Cessna Citation that apparently lost elevator trim authority last summer.

The pilot reported the airplane was climbing through 16,000 feet when the airplane suddenly nosed over to a 45-degree nose-down pitch. He disconnected the autopilot, reduced throttle and attempted to re-trim the airplane.

The trim indicator showed full nose-down trim, and neither the manual nor electric trim actuators would respond to inputs. He could not regain control of the airplane, and ultimately ditched it in Penn Cove, off the shore of Washington. Both occupants were rescued uninjured.

Another example of the power of trim lies in its ability to control the airplane should elevator control be lost for some reason, as the pilot of a Piper Turbo Lance recently discovered.

The pilot found after liftoff that he could only control the pitch with trim. He flew to a nearby airport with a 7,700-foot runway where he made an emergency landing.

The landing progressed well until the pilot reduced power to touch down, at which point the nose dropped and the nose gear collapsed. The damage was minor and the pilot was uninjured.

Inspection of the airplane found that the left elevator cable assembly had a broken turnbuckle.

So trim can improve your comfort if handled correctly. It can cause you to crash if it malfunctions or save you from disaster in some cases. Despite this reality, trim is widely ignored during preflight, overlooked on pre-takeoff checks and misused in flight. The Rodney Dangerfield of aircraft components.

Design Challenge
Trim systems work by intruding into the relative wind passing the control surface and fine-tuning that surfaces angle of attack. When you trim the nose down, the trim tab goes down, nudging the elevator to deflect further upward.

Elevator trim adjusts the center of lift so as to balance the airplane in the desired way along its longitudinal axis. Such adjustments are required each time the speed, power and configuration change. Most airplanes also need to be retrimmed periodically as fuel burns off.

The basic design of the aircraft sets the flying surfaces and controls to minimize drag in the cruise configuration. The trim then alters that configuration slightly to accommodate climb, descent and variations in loading. Just how the trim works mechanically from brand to brand changes because of patents the airplane manufacturers have on their products.

Mooneys, for example, have a jack screw that changes the angle of incidence of the entire empennage. The stabilators on Pipers have a trim surface that acts as both a trim tab and an anti-servo tab. As the yoke applies force to the elevator, it also moves the trim tab to lighten pitch forces. Cessnas simply use a cable dedicated to the trim tab. The trim moves independently of the elevator.

Regardless of the actual mechanics of the trim control, the task facing the pilot is the same: Use the trim control to remove the control pressures. However, the type of trim mechanism is important in considering the kinds of failures the system may have and the consequences of those failures.

Technique
Pilots generally have two kinds of trouble manipulating the trim. First, they attempt to make pitch corrections with the trim control, leading to a continuing series of pitch up, pitch down changes. Instead, establish the desired attitude with elevator control, and then use the trim to remove the fore/aft pressure on the yoke.

The second difficulty occurs when the pilot neglects to make multiple small adjustments rather than a few larger changes. Having said that, keep in mind that at a certain point control system friction will overshadow the trim adjustments.

Although the airplane tends to seek the trimmed airspeed, trim may not be able to hold it exactly how you want it no matter how hard you try to adjust it. FAR 23.173, which governs static longitudinal stability, holds that the airplanes design must require a pull to obtain and maintain speed below the trimmed speed and a push must be necessary to hold a speed higher than the trimmed airspeed. When the stick pressure is released, the airplane must return to within 10 percent of the original speed. The only exceptions are speeds that would require more than 40 pounds of pull or push on the stick and speeds that exceed the redline or are less than stall speed.

Mistrimming can lead to excessive control forces, such as during a go-around. Trim can mask rigging problems and control surface misalignment. It can cause its own problems.

A Cessna 421 was in cruise flight at 19,000 feet when the pilot reported a loud pop and the control yoke began to shake. He disengaged the autopilot and noticed the airplane was descending at a rate of 1,200 to 1,500 feet per minute.

Using the elevator and power, he was able to arrest the descent and control the airplane, but only barely. He flew the airplane onto the runway with gear and flaps up. It took power and full aft elevator to prevent the airplane from nosing over.