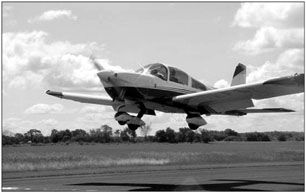 Isnt it strange how most of us-and our passengers-judge a flight by the landing? If youre like me, a greaser landing puts me in a good mood for the rest of the day, even if I botched a few decisions earlier in the flight. One of the keys to making that greaser is the flare.

The flare is actually a fairly complex maneuver for a number of reasons, which often makes getting a greaser a real challenge. In the flare, the aircrafts pitch is changing by a large degree. The aircrafts speed is also changing markedly, as does its power. All of this happens while poised just inches (hopefully) above the runway and maintaining alignment with the runway centerline. Theres a lot going on, and a lot to manage. Understanding some of the flares main elements can help us get that greaser more often than not, while we minimize any potential for loss of control.

Its Elementary
The flare has many main elements. They include energy management, aim point control, good timing and gentle but decisive control input-all are important ingredients. So is practice, practice and more practice.

When I towed gliders or flight instructed, it wasnt uncommon to make 30-plus landings in a day. Greasing a landing became almost second nature with all of that practice. Nowadays, I dont get 10 landings in a month. In a typical 50-flight hour week, I might get about five landings (I have to share the landings with the other pilot now.) My friends who fly the long international routes might get only three or four landings per month, and we all lament how we just dont grease them like we used to.

Many runway loss-of-control accidents can be traced to an unstabilized approach over the threshold and an improper flare. If the aircraft doesnt arrive over the threshold at a stabilized airspeed and sufficiently close to the glide path, your chances of a good landing are exceptionally small. If the aircraft isnt stabilized by the runway threshold, you need to perform a go-around. If you have let your aimpoint wander all over the runway and it is outside of the touchdown zone, you should also go around.

But you know that. Instead, lets presume youve arrived over the runway threshold with an acceptable airspeed, sink rate, glide path and aim point, and that its time to concentrate on the flare.

Where Should You Look?
My biggest problem early in my flying career was not knowing where to look during the flare, and this failure-in addition to being too rigid on the controls-led to inconsistent flares. During final approach, your concentration needs to be centered on the aimpoint. Its useful to temporarily check the wind sock for any final judgments, or to make certain that no other aircraft is entering the runway environment, but otherwise, your attention should be finely honed on the aimpoint.

Timing Is Everything
Your clue for starting the flare begins when the runway surface approaches a certain perceived normal angle in our peripheral vision. That normal angle is based on our previous experience landing on that runway and is fine-tuned with practice. This works well until we land on a runway that is much wider or narrower than our usual one. For example, if were at one of those former Strategic Air Command bases with 150-or 200-foot wide runways stretching from horizon to horizon, our eyes will be deceived. This creates the perception that the aircraft is closer to the runway than it really is, and we flare too high.

The problem with flaring too high is that we bleed off airspeed too far above the ground, and if we dont react in time, we can stall the aircraft and drop out of the sky. Hard landings are the usual result from flaring too high.

A narrower-than-usual runway also affects our flare adversely. Because we are waiting for the runway edges to approach that preconceived angle in our peripheral vision, a pilot unprepared for the narrow runway will sink very close to the runway before realizing they need to flare. This usually results in an abrupt pitching motion at the last moment above the runway and a rather abrupt landing.

By the way, my fellow heavy metal drivers know the difficulty of readjusting their flare picture when transitioning from their DC-3, 727, etc., to their J-3 Cub. After a long week of flying approaches in our work office, its a treat to go home and fly our simple J-3 Cub on a quiet airstrip and just enjoy the quiet environment.

Unfortunately, we can get so accustomed to starting the flare at 100 feet above the runway that when our eyes see the runway environment from the 100 foot aspect, we begin the flare. It works in the jets we fly for a living, but its way too high for a Cub. Its a matter of recalibrating our eyeballs to the correct flare picture for the aircraft.

Have you ever been in the right seat of an aircraft with a friend and done the landing? Did the sight picture seem a bit different from the right side of the cockpit? Maybe you were thinking it was just you, but it wasnt. There actually is a minor but significant difference in our perception of the landing sight picture from the left to the right seat. This is partly because the windscreen is curved in a different direction, which slightly distorts the view of the outside world.

Secondly, when we are in the left seat, we tend to use the peripheral vision from our left eye more than from the right eye for gauging our distance above the runway. This is reversed, of course, when were in the right seat.

One way to reacquaint yourself with the flare picture of the aircraft is to sit on the ground and observe the angles that the runway edges make with your eyes. The only difference from this picture and the actual flare is that the nose of the aircraft will be raised. Try this technique the next time you are checking out in a new aircraft. Youll find it is a useful trick for quickly learning the sight picture for that aircraft. A pilots vision during the remainder of the flare should be focused straight ahead on the end of the runway. Sometimes the nose of the aircraft can obstruct the vision over the nose, and therefore looking through the side of the front windscreen and looking down the runways edge about 50 yards ahead of the aircraft can help to render a useful perception of the aircrafts altitude above the runway.

Power Reduction
Many pilots also struggle with finding the right time to make the final power reduction in the flare. While each airplane and landing can be different, you should plan to slowly begin retarding power from over the runway threshold-unless you are in a light twin, which requires a slightly different technique and timing. There are many reasons you want to begin retarding the power slowly at this point. For starters, you obviously dont want to land with the power still on. That has caused more than a few ugly runway departures.

A second reason to slowly reduce power-in most singles-involves propwash over the tail surfaces. If you quickly closed the throttle, the propwash decrease just as quickly. Too much elevator lift could be lost, causing a rapid downward pitching moment. The only way to counter this is with a rather large elevator movement, which inevitably leads to under- and over-controlling. A slow motion of the throttle makes it easier for you to compensate with the pitch control.

Power reduction in a light twin requires a slightly different timing. The wing area behind the induced propwash is creating a lot of the wings lift, particularly at slow aircraft speeds. If you suddenly chop the power in a light twin, you are reducing the lift of the wing by a large amount, and a hard landing will result. Its good technique to touch down with the power off to help with slowing down the aircraft, but retarding the power too quickly in the light twin can result in a hard landing.

Popping The Balloon
One of the other problems I had in learning the flare included overcontrolling during the first part of the flare. This usually led to ballooning. It took a while, but I learned that beginning the flare requires subtle pressure. As the aircraft begins to slow down, flight-control effectiveness diminishes, and progressively larger control inputs are required to compensate. This leads us to one of the more common problems pilots tend to have, which is ballooning.

Ballooning can be caused by an excessive movement of the yoke, and/or having too much airspeed in the flare. Minor ballooning can usually be corrected by adding power: Since the airplane is pitched up, airspeed will quickly decrease as the aircraft balloons. If uncorrected, a hard landing is the usual result, sometimes accompanied by aircraft damage.

On the other hand, significant ballooning is best corrected by going around instead of trying to salvage the landing. Of course, going around so close to the runway and with full flaps can be rather risky.

In fact, some of the most tenuous situations Ive ever been in involved students performing a go-around in the full-flap configuration and at a very slow airspeed while recovering from an exceptional balloon. This places the airplane on the back side of the power curve and, when heavily loaded on a warm summer day with flaps fully extended, it may be unable to go around.Learning to recover from a balloon and how the airplane will react with full flaps is something best practiced at altitude. Some aircraft manuals suggest adding full power (dont forget the carburetor heat) and climbing out until a certain airspeed is attained before decreasing the flaps. Other manuals recommend full power followed by decreasing the flaps to an intermediate setting right away. Often, the best thing to do is to actively manage pitch, power and trim while ensuring a positive climb rate.

You definitely want to know the correct procedure for your aircraft, especially when recovering from a balloon so close to the ground.

Putting It All Together
In sum, the key ingredients to a greaser include a stabilized approach, proper aim point control, knowing where your eyes should be looking and when to shift your scan, consistently starting the flare at the right moment with gentle control movements, a slow deliberate reduction in the power … and practice, practice, practice!

Also With This Article
“Flare Problems And Solutions”
“Why Dont Airline Pilots ‘Grease’ Their Landings?”
“Watching And Learning”