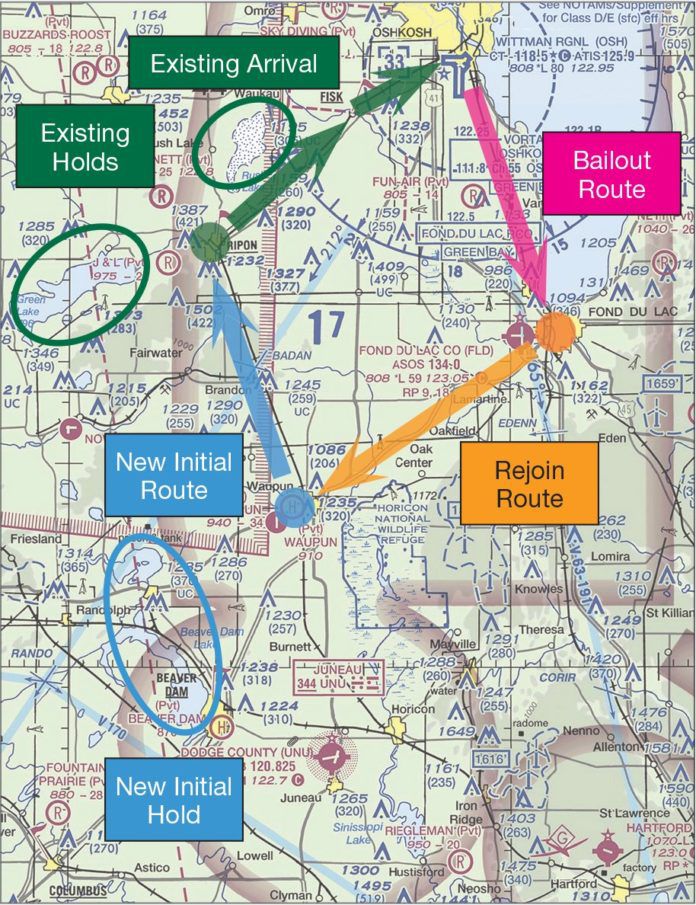 If you’ve ever flown into Oshkosh, Wis., for the Experimental Aircraft Association’s annual AirVenture Fly-in, you may have used the Fisk Arrival, a set of VFR fixes and procedures that helps organize and standardize landing at what is, for one week each year, the world’s busiest airport. Poor weather in advance of the 2018 event resulted in a surge of arrivals on the Sunday before the show’s Monday opening. According to Sean Elliott, EAA’s vice president of advocacy and safety, “That brought a huge wave of inbound flights to Oshkosh in a short six-hour period that afternoon. While the controllers and ground personnel did yeomen’s work to park 3000 aircraft within a six-hour period, there are ways to do it better.”

With that in mind, the association convened a working group to consider pilot feedback and input from managers with “expertise in GA safety, homebuilt aircraft safety, air traffic control, and mass arrival processes,” the association said. The results identified three broad areas of focus: procedure changes, improving its own education to pilots and finding “innovative air traffic control methods.”

Among the changes being recommended are additional features of the Fisk Arrival, which uses the small town of Fisk, Wis., as a waypoint. The additional features include a new holding point at Beaver Dam Lake and a new initial point at Waupun, Wis., both of which are south of the Ripon waypoint, which has marked the procedure’s beginning for years. A diamand-shaped arrival and “bailout route” to handle go-arounds is also envisioned. Some of the proposed changes are overlaid on the sectional chart excerpt below.

Proposed process improvements the association says it’s working on include a “text messaging arrival update tool for ATC that will be available to attendees” and expanded aircraft parking to the south, plus improved parking management strategies designed to maximize the available space. “By 2020, EAA will achieve a ‘no aircraft turned away’ condition for general aviation camping parking, weather and ground water saturation concurring, and explore means (e.g., a potential reservation system or other incentives) to shift arrivals to days with lower volume.”

The EAA also said it would develop an educational campaign for pilots planning to attend the fly-in. Plans include training materials on arrival informational tools, weather planning and preparedness, and best practices during arrival operations. Distribution is planned to include a “potential online training course,” online webinars, EAA magazines, EFBs like ForeFlight, and other resources, and may include WINGS credit from the FAA. The association also wants to work with the FAA to “progressively integrate new technologies (GPS, ADS-B, TIS-B, etc.) into the AirVenture arrival procedures” in a phased, multiyear initiative.

The FAA’s FAASTeam released a new GA Safety Enhancement fact sheet in November, highlighting the dangers of controlled flight into terrain (CFIT) and recommending tips and best practices to avoid such an event. “In a typical year, there are about 40 CFIT accidents, about half of which are fatal,” the fact sheet noted.

In a Special Airworthiness Bulletin (SAIB SW-18-31) the FAA on November 21, 2018, informed operators there have been “numerous reports of Aspen Avionics EFD1000 PFD, EFD1000 MFD, EFD1000 EBD, and EFD500 MFD units with software version 2.9 and the ADS-B IN (FIS-B) Weather Interface option repeatedly resetting itself in-flight.” The reset occurs in five- to ten-minute intervals, and may deprive the pilot of altitude and airspeed information for up to one minute.

The cause is being investigated. Preliminary information suggests that opening the ADS-B circuit breaker “has been demonstrated to resolve the issue,” the SAIB said.

“The condition is apparently caused by unexpected/malformed data being transmitted from some FIS-B ground stations that is not rejected by the EFD1000/500 system,” Aspen Avionics said. “Since it is caused by the data content of the specific ground station you are near, not all aircraft are affected equally.”