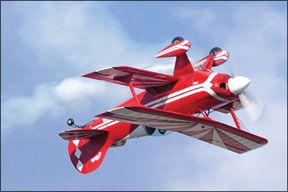 I continue to be surprised about pilots having accidents while doing maneuvers close to the ground. This list includes airmen from a wide variety of backgrounds, including airshow performers, flight instructors, military pilots and general aviation pilots. It seems to me that some of us have forgotten or misplaced the early-learned information concerning the relationship between Gs and wing stall speed.

Even though there are many factors contributing to stalling a wing, in this article I will use “wing stall” as an indication of the reduction of lift and corresponding increase in drag when the critical angle of attack of the wing is exceeded. As that

statement hints, and as we shall see, a wing can be stalled at any airspeed; all we have to do is exceed that critical angle of attack.

Recently, while performing a brush-up pre-flight briefing with a pilot, we were sitting in the airplane and I was asking him some questions about the various airplane speeds. I asked, “What is the stall speed of the wing?” I could see that he was not sure what to look at, and I reminded him of the arcs on the indicator.

He hesitated and said, “Gross weight?” Yes, and what else? “I dont know,” he said. “In addition to what you have said,” I replied, “the bottom of the green arc is the stall speed under one G.” I felt the necessity to stop, pull out my blank tablet and do some arithmetic. “Lets review,” I said.

The stall speed of the wing at any G is equal to the stall speed of the wing at 1G times the square root of the G. We then used some real numbers for different situations and it can be startling, to say the least. In our primary training, the first place this relationship shows up is when we are doing steep turns. It is during these 45-to-60-degree bank turns that we can experience our first 2+ Gs.

Now let us fast forward to being a certificated pilot. The pilot and passenger friend are pleasure flying around the local lake or perhaps the friends neighborhood, doing turns around a point. To keep on top of the point, it is necessary to increase the bank, perhaps to as much as 60-75 degrees of bank. If the G-loading reaches 4, the wing will now have a new wing stall speed equal to the stall speed at one G times the square root of 4, or twice the 1G stall speed. So, with a 1G stall speed of 60 knots, the new stall speed will be 120 knots. Thats a 100 percent increase!

Does this scenario sound familiar? It should; its the old story we often hear about when a pilot overshoots the turn to final from base and increases bank and rudder to get back to the extended centerline. Typically its a case of not remembering about those “accelerated” stalls from primary training. Although we think of these as spin accidents, they are sometimes initially caused by not being aware of the G vs. stall speed relationship of the wing.

Recently, we may have witnessed a very public demonstration of an accelerated stall while turning in the Cory Lidle accident (See “The Not So Tight Turn,” December 2006). Apparently, Lidle and his instructor were making a downwind 180-degree turn. The NTSB, in its preliminary report, determined Lidles Cirrus SR20 needed at least 53 degrees of bank to make the turn. So, if the pilot saw he wasnt going to make it, he may have increased the bank beyond to 60 degrees in an effort to make the turn.

If such a turn was attempted and if the pilot didnt increase airspeed to above the high-G stall speed, the wing would stall and the airplane begin a trajectory away from the desired turn path. In such an event, the airplanes trajectory changes to one heading for whatever was outside the turn on the way toward the ground.

If the pilot did increase airspeed to compensate for the increased G loading, he would have increased the radius of turn of the aircraft, with the effect of almost ensuring the airplane would hit the building.

Another scenario where this V-G relationship is forgotten is during the steep approach to landing with power off and, during the last minute, an attempt to flare above the runway.

Often this pull to the flare exceeds 1G. The result is an increase in stall speed of approximately 20-to-40 percent down near the runway. A typical result is the airplane passing into the well-known “area of reverse command.” In other words, as the pilot pitches the nose up to flare, the wing slows to stall speed and the airplane continues its descent towards the runway. The result is a hard (sometimes very hard) landing, rather than leveling off just above the runway and smoothly sliding on the mains.

Similarly, we see this occurring when the pilot is using a hard slip to make his descent to the runway where it is not unusual to reach 500-1000 fpm, during which, if a high-speed stall occurs during the flare, again, makes for a very hard landing and possibly aircraft damage, personal injury or worse.

Probably the most alarming occurrences of violating this V-G relationship come from professional pilots performing at air shows. Several times a year we see or hear about an experienced pilot hitting the ground very hard trying to complete a simple looping maneuver. When performing a loop and allowing the airplane to get too close to the ground at the bottom of the loop, it is necessary to pull harder in an effort to keep from hitting the ground. This results in a high-G pull and without the proper speed, a high-speed stall occurs, resulting in an increase in descent towards the ground. Many times, the “turn radius vs. speed relationship” is violated prior to the V-G relationship. This is particularly true of the incidents involving military demonstration pilots. High speed means bigger radii, and so even with all their great power to weight ratio, the military fighter is not exempt from violating these basic relationships with speed, G and turn radius.

So far, weve discussed the dangers of high-G flight close to the airplanes accelerated stalling speed. Those are the lemons. Is there is an area of flying where the V-G relationship can work to our advantage, where we can use those lemons to make lemonade? Possibly.

Upset training for pilots of varied backgrounds is becoming very popular these days. The V-G diagram for your aircraft can prove very interesting in this regard. If you dont have one for your aircraft, you can make one using the equation on page 4 and some of the V-speeds for your aircraft.

One of the popular scenarios in this type of training is to put the airplane in a bank beyond 90 degrees, as might be encountered by flying into wake turbulence or bad weather. This can put the wing close to its 1G stall speed; an attempt to recover by pulling and rolling can cause a higher G and a stall, perhaps followed soon afterward by loss of control.

If we are at the 1G stall speed and inverted, we should add power and push the stick or yoke forward, which will

reduce the airplanes G-loading as well as the stall speed (since it always corresponds to the new G-loading). Now we can safely use the controls to roll the airplane to the upright position without fear of stalling the wing.

Even when casually practicing aerobatics, these extreme attitudes can be encountered unexpectedly, and if the nose is pointed downward and the airplane is inverted, speed builds up rather quickly. The G-loading occurring as result of the pullout from this attitude easily can be outside the airplanes V-G envelope.

Training for this recovery includes not only throttling back but pushing enough to “unload” the wing-remove the high G-loading-and lower the stall speed. Follow the push to unload the airplane with a simple roll-without pulling again-will safely recover the airplane to upright level flight.

It should be noted that our G meters are built to indicate Gs for straight pulls or pushes. For rolling pulls, it is recommended that we adjust the maximum G to about two-thirds of the published maximum for straight pulls or pushes. So, if your airplanes published maximum G-loading is 6 and you perform a rolling pull to 6, you have more than likely exceeded the aircrafts limitations.

So, how many stall speeds does your airplane have?

Paul Logue (ATP, CFII-MSEL, IAC judge and competitor) is a retired corporate pilot living in Suwanee, Ga. He has some 18,000 hours and currently flies a Laser 230.