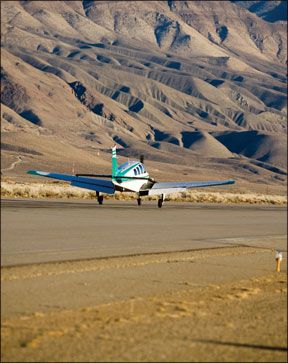 It happens every summer. Temperatures rise and with them so does density altitude. It may seem we should simply avoid flying when the density altitude (DA) creeps up, but this would be very short-sighted-although there are some hazards warranting a delay when the air heats up (thunderstorms and desert turbulence among them), the fact is we can safely fly in most high-density-altitude conditions. Doing it, however, requires some technique and some compromise.

We all learned the basics of density altitude when we first learned to fly. But what

are the practical techniques necessary to maximize airplane-and pilot-performance when hot and high? And when do we need to employ them?

What is high density altitude? Its really a function of the airplanes capabilities…and those of the pilot. Youll find Piper Cubs and Cessna 150s flying out of Leadville, Colo., (elevation 9927 feet msl), yet hear of DA-related accidents involving much more powerful airplanes at much lower altitudes. Air density increases to “high” levels in summers heat, even at relatively low-altitude airports. When you consider that maximum available power drops by about 10 percent for every 3000 feet of density altitude increase above sea level (in naturally aspirated engines), even flat-land flyers need to compensate for power lost due to high DA in summer.

The airplanes ability to operate efficiently when the air is thin is a function of the engines power production and the airfoils (propellers and wings) ability to turn power into thrust and lift. The trick is to get the maximum performance out of the airplane for the conditions, after having determined that performance is sufficient for safety in all phases of flight before you make the attempt. Those performance charts are in the POH for a reason. Use them…and apply a healthy margin of safety besides.

Hot weather often generates strong surface winds. High-elevation airports are frequently in mountainous terrain that creates localized wind flows, and terrain that sometimes makes for “one-way” airports-you can only land from one direction, and only take off in the other, to clear terrain. Consequently when we talk about high DA, we sometimes are talking about airports where localized winds can be a complicating factor.

Its not unusual for accident summaries for high DA events to include downwind or gusty crosswind takeoffs and landings as factors. Already operating on the margins of capability, airplanes departing and arriving in adverse winds may not have the reserves of control, lift and power needed to compensate. Generally speaking, delay or divert if winds are not supportive of the runway you need to use for a high DA takeoff or landing.

Some airplanes have graduated markings on the fuel flow gauge showing indicated flow rates for maximum horsepower on takeoff and in climb. The idea is to go to full throttle, then lean the mixture as needed to reach the altitude-indicated fuel flow rate. This gives an approximation of whats needed for takeoff and climb power.

The only way to positively obtain the most available power is to set mixture for maximum horsepower before takeoff. This is accomplished by performing a full-power run-up, then lean for “best power” indications-maximum rpm in fixed-pitch airplanes, about 75 deg. F/40 deg. C rich of peak EGT in airplanes with exhaust gas temperature gauges. Leave the mixture control alone during any more ground operation before takeoff, and when you go to full throttle the mixture will be set for max power.

Plan to climb out at an indicated airspeed closer to V

y than the Vx you might use for low-altitude short-field takeoffs. The Vx speed increases with density altitude until it converges with Vy; high-angle-of-attack attitudes are big drag-producers, and with reduced power, drag is something you dont need right after takeoff. Further, if the airplane has retractable landing gear, leave the gear down until well clear of obstacles. Not only does landing gear increase drag while in transit in most designs, but the wheels will remain down if the airplane settles back to the runway as well.

Should you use flaps when taking off from a high-DA airport? There is no blanket answer to this question. On most airplanes a small flap deflection (10 to 20 degrees) may increase lift without adding much drag. On others, the drag increase with flaps may be prohibitive. With flaps extended some airplanes may get off the ground sooner at high DAs, but initial climb (for clearing terrain or obstacles) may actually be reduced. Are flaps effective or wise for your high DA airport? Run the calculations from the handbook performance charts, and practice the varying techniques at airports with long runways and no obstacles before committing to an actual attempt.

After you get off the ground you may still need to outclimb weather or terrain. This requires you maintain a max-power condition as altitude increases. Some engines have automatic mixture leaning for climb, Most airplanes, however, require manual leaning with changes in altitude. In fixed-pitch propeller airplanes youll need to lean for maximum propeller rpm, a challenging feat since prop speed may vary with changes in IAS or pitch attitude as well. In airplanes with controllable pitch propellers (and fixed-pitch airplanes with an EGT gauge) you can find maximum power by controlling exhaust gas temperature. With some experience, you can determine a “target EGT” for climb that approximates best-power. In the 300-hp Teledyne Continental-equipped airplanes I commonly fly, for instance, best power comes at 1250 to 1350 deg. F. Move the “red knob” as needed to maintain around 1300 deg. F and the engines putting out about as much power as it can.

Once in cruise, remember that any further need for climb (terrain, weather) requires the same attention to max-power mixture. Ultimately every airplane reaches an altitude above which it simply does not have the power to climb. Accustomed to looking at the altimeter, unfortunately it sometimes surprises pilots to learn service ceiling is based on density altitude.

But you may be arriving at a high-DA location, not departing or cruising over it. In a twin, you need to consider single-engine capability: The maximum-weight single-engine service ceiling of most piston twins is somewhere around 5000 feet…density altitude. Turbocharged and turbine airplanes have higher SE service ceilings, but they may still be lower than some MEAs in mountainous areas. When selecting a route over mountains consider the underlying density altitude, and compare it to your airplanes single-engine service ceiling at the anticipated aircraft weight. You may want to revise your route to fly over lower terrain, just in case.

One of the hardest questions to answer about high-DA operations is “where should the mixture be set before landing at a high DA airport?” From a safety and pilot-workload standpoint the answer is, “Set it where it needs to be if you need to make a go-around or missed approach.” Trouble is, we have very little guidance from the manufacturers to predict this mixture setting before descending.

The best method is to approximate the proper position of the mixture control(s) before final descent, based on your experience with high-DA takeoffs and the physical position of the handles at takeoff under similar conditions. Then it will merely be an issue of fine-tuning the mixture after going to go-around or missed approach power, aiming for target EGT, placarded fuel flows or (with fixed-pitch propellers) a target rpm once established in a climb.

With turbocharging its easy-go to full rich. Remember that excessive angles of attack mean tremendously increased drag, so be careful to control attitude on the climbout.

Its become common to crank up fuel flows to the high end of factory tolerance (and beyond) in an effort to get better cylinder cooling at takeoff and climb power settings. But excess fuel reduces temperatures by slowing the combustion process, developing less power; it makes the engine much less efficient at generating the horsepower necessary to take off and climb at high DAs.

Launching from a high-DA airport with an obstacle you may need to sacrifice a little long-term cooling in favor of short-term engine performance. In other words, youll get better performance by leaning as necessary for target EGT/optimum fuel flow for the takeoff roll and initial climb. Once past obstacles, enrichen the mixture for cooling. Youll get the maximum available performance for takeoff and initial climb but still restore “fuel cooling” before temperatures have time to get out of hand.

What about lean-of-peak EGT climbs? “LOP climb” may make sense for temperature control in some specific engine applications, but for a given MP/RPM combination LOP means theres much less power. This will adversely affect your climb performance, so look at the resulting rate of climb to see if LOP makes sense for a given DA situation.

Far better than diverging too much from maximum horsepower mixture settings is to control engine temperatures with air flow. In hot weather this often means climbing out at indicated airspeeds much higher than “book,” accepting the rate of climb that results.

Much of the foregoing is covered in your airplanes POH and engine operating manuals. The real key is understanding the major differences between operating in high and hot conditions when compared to what youre used to during, say, the other nine months of the year.

When in doubt, whip out the books and manuals, and perform the necessary calculations to determine if you have the performance to get in and out-safely-from your high-DA airport and whether you can reliably stay aloft once you get there. A few minutes preparation can eliminate even a seconds fear, doubt and hesitation. Maybe perspiration, too, although if youre concerned about density altitude for todays flight, its probably too late for that.