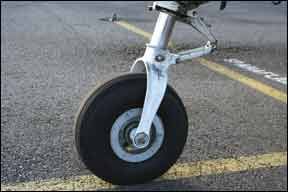 Just because the vast majority of the airplanes most of us fly have their little wheel mounted on the nose instead of the tail doesn’t mean the nosewheel is immune to abuse. Nor does it mean we can ignore the nosewheel’s peculiarities, even if an airplane with one is much easier to handle on the ground.

In fact, one conclusion we can draw from the number of runway loss of control (RLOC) accidents and incidents involving nosewheel-equipped airplanes each year is that simplifying ground operations doesn’t mean anyone’s immune to problems. One could observe that most pilots with no tailwheel experience not only lack a full understanding of how to use the rudder but that lack of understanding also extends to ground operations. Let’s take a look at what some of those problems can be and how to fix them from the cockpit.

Two Types
First off, we need to consider there are two basic types of nosewheels: steerable and non-steerable, or castering. As the terms imply, some airplanes can be steered on the ground via their nosewheel, usually with the rudder pedals. (Some airplanes—the Aerostar’s rocker switches comes to mind, plus transports—use either a tiller or small steering wheel for directional control on the ground.) Airplanes with non-steerable/castering nosewheels use differential braking for directional control. That’s the only real difference between them for purposes of this article.

Airplanes with steerable nosewheels generally are easier to handle during taxi operations. Gently using the rudder pedals to steer the airplane where we want it to go should become second nature after the first couple of lessons. At the same time, steerable nosewheel systems are more complex than their castering cousins, require more maintenance and generally are heavier. But they also make the airplane easier to taxi, especially in windy conditions.

Airplanes with castering nosewheels require differential braking to steer on the ground. The good news is some really tight turns on the ramp can be performed. The bad news includes increased brake wear, at least when compared to airplanes with steerable nosewheels. Those are the main operational differences between the two types.

Taxiing
All of these differences are most apparent when taxiing. An airplane with a steerable nosewheel generally will be easier to handle in windy conditions, all things being equal. Gentle pressure on the downwind rudder pedal easily will prevent weathervaning into the wind while taxiing.
An airplane with a castering nosewheel, on the other hand, generally will want to point into the wind. This tendency is countered with opposite braking, as needed. The only real trick will come when stopping or turning while the wind is blowing—slightly more pressure on the downwind brake will be necessary to keep things straight.

The other thing pilots need to do when taxiing a nosewheel-equipped airplane? Keep the nose light, especially when braking. In my book, the only airplanes with too much ground clearance are pushers, like the Seabee and Lake amphibians. That prop spinning just in front of the nosewheel—or the pair on the wings—is expensive. The slightest nick while it’s spinning can mean a very expensive engine removal and teardown. If the prop hits something substantial, the engine is sure to be damaged, creating even more financial upheaval.

The nosewheel-equipped airplane isn’t a car, and we shouldn’t drive it around like one. Keep the nosewheel light when taxiing by placing the pitch control in the full nose-up position. The only time this is a bad idea is when taxiing into a stiff breeze, when we risk generating enough lift the airplane gets too light on all its wheels. In that event, place the pitch control in the neutral position. Otherwise, get the nose up all the time, even when taxiing on the runway and lining up, and through the beginning of the takeoff roll.

Takeoff Roll
As the takeoff roll begins, we need to start flying the airplane. If you’ve been paying attention, what we’re talking about here is flying the airplane even though it’s on the ground, so what comes next shouldn’t be much of a shock.
Of course, beginning the takeoff roll from a standing start will require some rudder pressure to counter the torque of a single’s full-power engine. In twins, you also may need rudder input to keep things straight, unless it’s equipped with counter-rotating propellers. Slightly relax the nose-up pitch input you’ve been maintaining to place some additional weight on the nosewheel. Ideally, you’ll be keeping the airplane straight with some combination of rudder and steering/brake input. But that won’t last long.

At some point while accelerating on the takeoff roll, the airplane’s rudder begins to be effective and we transition from using brakes or steering for directional control to what the pedals are there for. As the airplane accelerates, gently begin lowering the nose to a slightly nose-high position. Maintaining directional control with the rudder pedals will become much more effective as speed builds and we can get our toes off the brakes early on.

Riding the brakes into the takeoff roll after the rudder becomes effective is very bad form. It wears out the brakes and tires prematurely, and lengthens the takeoff roll. Get off the brake and onto the rudder as soon as possible.
From here on out to the next landing, you probably don’t need to think much about the nosewheel. As the airplane nears liftoff speed, you’ll gently add back pressure as always, the nosewheel will lift off the ground, the airplane will roll along on its main wheels for a while, and then the whole thing will go flying.

Landing Roll
Taking of your nosewheel during a landing begins before you touchdown, when planning and executing the flare. Let’s be clear: There simply is no reason whatsoever for a nosewheel-equipped airplane to touch down first on that nosewheel. It’s bad airmanship and poor technique. It’s also a recipe for an RLOC accident, for a prop strike and for breaking off the nosewheel itself.

Instead, touchdown should always be on the main wheels—perhaps one, then the other, in a crosswind situation—but both mains should be on the ground before the nosewheel. If this is a touch and go, the nosewheel may never touch, remaining a few inches above the runway. Whether it touches or not, one of the keys in flying the nosewheel will be maintaining the right amount of nose-up input on the pitch control: too much and the airplane may want to try flying again, especially if a wind gust hits it. Too little back pressure, and the nosewheel will be bearing too much of the airplane’s weight. Like Mama Bear, you want it just right.

Now, if it’s particularly gusty and directional control is a problem, you’re justified in relaxing most, but not all, of the back pressure to ensure solid nosewheel contact and better directional control. But you also should be using the rudder to keep things pointed where you want them. And you should never move the pitch control full forward just after touching down, even if directional control remains a bit squirrelly. Doing so risks the main wheels leaving the runway and all of the airplane’s weight resting on the nosewheel. That’s called “wheelbarrowing” and it’s a sure way to collapse the nosewheel.

Once the airplane has settled on the mains, directional control is assured and the nosewheel is lowered, we should be decelerating. As we slow down, and after our reduced speed also reduces the pitch control’s effectiveness, smoothly return the pitch control to the full nose-up position, getting the airplane’s weight back on the main wheels. Taxi back to parking like this, keeping fully in mind our earlier admonishments against fully relaxing the pitch control and taxiing.

Shimmy, Shimmy, Shake
Nosewheels are not without drawbacks. In the air, they’re draggier than a tailwheel. They’re not well-suited to rough-runway or bush operations. They’re more susceptible to damage than a nosewheel, and when they do get damaged, it’s likely a propeller and engine will need some work, too. For most of us, though, the biggest drawback of a nosewheel is what can be a propensity for it to shimmy. After all, you won’t find a shimmy dampener on a tailwheel.

Typical nosewheel shimmy problems stem from wear and tear on the assembly. They can be caused by a worn dampener, which allows its fluid to either leak out completely or just past the internal piston. Wheel/tire balance is another likely cause, and the cure is obvious. Worn torque links and/or steering arms also can generate shimmy, but also require some sleuthing to diagnose and repair.

Nosewheels like to shimmy the most on the landing rollout, usually because we’ve relaxed the pitch control and there’s too much weight on it for the airplane’s speed. This cure is obvious, also: Move the pitch control to the full-nose-up position and keep it there. Nosewheels shouldn’t shimmy; Violent shimmying can break other things and result in loss of control. It’s uncomfortable for the pilot and passengers. Get it fixed.

Fly The Nosewheel
Flying a nosewheel-equipped airplane isn’t rocket surgery, especially when compared to a tailwheel, but doing it properly does require that we respect the nosewheel and its relationship to the rest of the airplane. The main wheels are where the weight should go. The nosewheel is only there to help with directional control and keep the nose itself from falling onto the ground.

Compared to a tailwheel, they’re much easier to learn and consistently fly well. Just as with a tailwheel-equipped airplane, though, it has to be flown all the way from parking to the runway, and back to parking after the flight. Just because it sits level, like a car, doesn’t mean you can drive it like one.