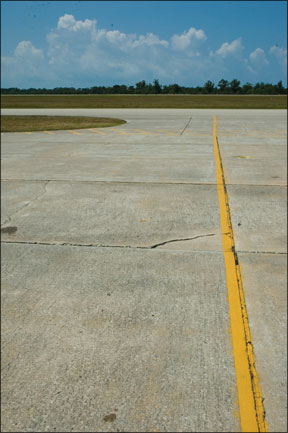 Before we can get to the runway-or the FBO-we have to taxi. Its easy to conceive of the taxi portion of our flight operations to be akin to driving a car, but the only things they have in common is their two-dimensional nature. Instead, taxiing is an operation requiring a skill and experience level similar to

landings. Especially since were often closer to other objects than at any other time.

How to taxi depends on several variables, including time of day, visibility, aircraft type, the pavement (or lack of it) and its condition, plus surface traffic, among others. But if we focus on a few elements of the taxi operation and pay attention, we should be fine.

Even at the lowliest non-towered facility, we need to know how were going to get from where we started the engine to the runway. Ideally, we do this before even getting in the airplane, including a quick survey of the area immediately surrounding the airplane for foreign objects, tiedown ropes and chains and other vehicles. We should have a taxi route to the runway in mind before lighting the fires.

At a towered airport, this often is done for us. Be sure to write down the taxi clearance and read it back to the ground controller. If the airport is unfamiliar, or were a total newbie at this, it pays big dividends to download and print out published taxi diagrams. The FAA/Aeronav chart office (aeronav.faa.gov) is a great resource for this. Other resources are available, too, including state-published airport directories. Grab whatever you think you need and keep it in the airplane or your flight bag.

Of course, the real issue is making sure the route is both clear and adequate. Ive done my share of trying to squeeze up or down between obstacles on a narrow taxiway and its not fun. As is the case any time an airplanes engine is running, keep your head on a swivel, looking for obstacles, vehicles, people and other aircraft.

Even at Big City Municipal, taxiways and ramps have obstacles. Chocks, fuel trucks and the odd red carpet are just some of the common items youll find. Moving down the food chain, youll also find trees, fenceposts, construction equipment and barriers. At my current home plate, we have wildlife, narrow taxiways, grass/pavement transitions and even mailboxes with which to contend. Confronting such obstacles while operating a motorized vehicle featuring one or more rapidly spinning objects mounted between fragile structures whose ends we cant see is a recipe for trouble.

The only good thing about most obstacles is theyre not moving; we should be able to see and avoid them. If they are moving-and especially if theyre moving toward you-stop. This isnt a game of chicken. Reduce power, apply the brakes and wait to see what the other guy is doing. Its entirely possible he doesnt see you, even with your strobes on. When following another airplane on a taxiway or ramp, keep in mind the guy in front of you may stop suddenly for exactly this reason. For a variety of reasons-including this one, but also to avoid jet/prop blast-keep your distance and leave a healthy distance from the guy in front of you.

When arriving at unfamiliar airports, dont get off the beaten path: Its likely there be obstacles in that uncharted territory. Still, the route to the ramp may not be obvious. Stay on the runway if you cant determine a safe, obstacle-free path to the ramp. This is where a little pre-flight research-and the handy-dandy taxi chart mentioned earlier-are invaluable.

Ultimately, though, you may find yourself confronting something you hadnt planned for and which poses a threat to the airplane. (Just snick the lever up into reverse…oh, wait….) If youre at a towered facility, ask the ground controller. If not, see if anyone on the CTAF knows whats going on. If that proves fruitless, shut down, climb out and survey the area. You may need to push the airplane or the obstacle out of the way. (Hint: use a towbar.)

My biggest pet peeve in ground operations is the guy who uses run-up power and partial brakes to taxi to the active. Not only is he Exhibit A of someone who doesnt “get it,” its also a great way to ensure the local maintenance shop stays in business. In addition to the engine-cooling and brake-wear issues, its too easy to lose control when doing it this way.

Never use more power than is absolutely necessary to get the airplane rolling. Then, immediately and smoothly start reducing power to keep it rolling. On soft surfaces-about which theres more in a moment-it may take quite a bit of power to get things moving and keep them moving. Consider towing the airplane to pavement or out of the soft spot rather than using all the power you have.

Once rolling, use only enough power to keep it rolling. Especially at small, non-towered facilities, you rarely want to taxi faster than about 10 knots (use your GPS). Youll want to be slower than that to negotiate turns and any downhill segments.

At larger airports, 10 knots might be a bit slow, so youre justified in accelerating to 15 or so. But 20 is too fast. Remember: This isnt your SUV; its an airplane, and its brakes are about the size of a salad plate. Also remember that, pretty much by definition, youll have a tailwind when taxiing to the active. Its easy to let things get too fast by the time you want to be slowing down and stopping at the run-up area. If you never allow the airplane to taxi too fast, youll never have a problem slowing it down. In my book, one mark of a good pilot is how little he or she uses the brakes. About the only time we should require their prolonged application is at the end of a long taxi. Other times, we should be moving slowly enough that a mere tap brings everything to a halt. Besides, I dont like changing brake pads.

Of course, how the airplane handles when taxiing matters. Airplanes with steerable nosewheels generally are easier to taxi. Those with castering nosewheels can require constant attention just to keep them pointed straight, especially in a crosswind. One major difference between them is when maneuvering on a tight ramp. With a steerable nosewheel, use pedal pressure to get the turn started, then apply inside braking to tighten its radius. Before its over, a bit more power might be necessary. With a castering nosewheel, youll obviously need to brake heavier and earlier to get the same turn radius. The danger here is using too much power, since brakes can fail, leaving us with a real problem.

My second biggest pet peeve is the thoughtless cretin who aims his prop blast into an open hangar. (I wont even discuss the Manassas, Va., brain surgeon who decided it would be just dandy to park a big Bell helicopter at the end of a T-hangar row, near a group of tiedowns.) Please, folks, think about whats behind you, as well as whats in front, when taxiing.

Most of us do our flying on good-weather days from paved facilities, so we usually taxi on dry pavement. But throw in some standing water from a passing thunderstorm, or ice and snow, and things can get interesting. Since airplane tires arent designed with low-friction surfaces in mind, stopping and even directional control can be a distinct challenge on other than dry pavement. Go as slow as you can.

On grass, gravel or dirt, things get even more interesting. First, use the pitch control (yoke/stick) to maximize prop clearance. Youll likely need more power to start rolling, and need to use some additional amount to stay that way. Managing your speed on soft ground is even more critical since tires will be more prone to slide under hard braking.

Again, on anything but dry pavement, the key is to keep things moving, but slowly. And dont taxi much faster when on pavement, either.

Recently, while arriving at a mid-sized FBO, I was directed to follow the tow vehicle, which promptly motored onto a crowded, one-way ramp. As I was about halfway through a turn down a taxi row, with planes parked on both sides, another airplane pulled out of the line and turned directly toward me, catching me and the lineguy by surprise. Fortunately, I had room to turn away from him-I hadnt fully entered the ramp, yet-and was able to maneuver clear of both the oncoming traffic and parked airplanes. The guy in the other airplane obviously wasnt paying attention. But it all worked out and no one had to shut down.

As with so many other things involving aviation, we need to think before we taxi. Once the airplane is moving on the ground, we need to stay ahead of it, combining our aeronautical skills with whatever we might have learned from driving.

Above all, stay on the centerline-the yellow-brick road. Few really bad things can happen there.