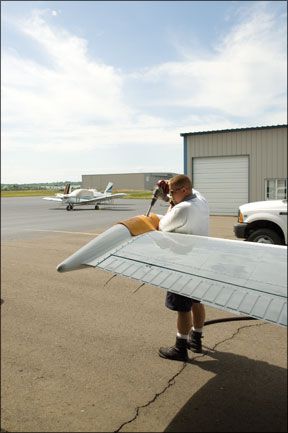 I was painting myself into a corner. Id departed Louisville, Kentucky into a screaming westerly wind bound for Jefferson City, Missouri. Snow and icy clouds threatened to the north, so I steered the Cessna 172 slightly south of a direct course and crossed the Mississippi somewhere north of Cape Girardeau. Now making maybe 70 knots ground speed, I was over heavily forested hills, the few small airports below closed from a recent, heavy snowfall. I started to worry about fuel.

Given the Skyhawks limited engine instrumentation, Id leaned for a “best-power” condition by finding maximum rpm. I had no way to read my fuel consumption directly from the panel; time en route, estimates from the Pilots Operating Handbook performance charts and notoriously inaccurate fuel level indicators gave me the only hints of how much fuel Id burned since takeoff. I thought I was burning about nine gallons per hour, which should allow a little over five hours flight at cruise power, but I had no way to tell for sure. And Id been airborne about 3.5 hours with about 45 minutes to go at my current ground speed. The Cessnas fuel gauges arced up and down in the light turbulence like windshield wipers. It was time to make a change.

Calling ahead, I learned Rolla, Mo., was plowed and open; I was on the ground in 15 minutes. When we filled the tanks, I learned there were six gallons of usable fuel remaining when we landed-about 37 minutes at the actual rate of fuel burn I computed after the flight. Had I pressed on to my destination, I almost certainly would have run out of fuel.

Fuel starvation and fuel exhaustion account for as much as half of all engine failures in piston-powered airplanes, and have resulted in some high-profile turbine and even transport-category accidents as well. Amazingly, many fuel-related engine failures happen within sight of the planned destination airport; in the 10 times Ive attended EAAs AirVenture convention. I know of at least two cases in which an arriving airplane ran out of gas on the runway.

Its obvious were not doing a good job with fuel management and that a better understanding of fuel management can eliminate a major cause of engine failures and one of the most common contributors to fatal aircraft accidents.

plan to run out of fuel?

Nobody plans to run out of fuel. The opposite is true: running out of fuel often results from lack of preflight planning and fuel verification, or incomplete monitoring in flight. In the C172 experience I related, I began to worry about running out of gas once I found myself over an area with few open airports while banging into a strong headwind. In reality, I should have worried more about fuel before I ever took off-anticipating stronger-than-expected winds as a possibility and checking Notams for open alternate airports. Already at a reduced groundspeed before I crossed the Mississippi River, I could have landed at an airport along its shores to top off before crossing the area of snow-covered runways.

Pilot ego can come into the equation as well. I participate in a number of aviation chat lines, and a common thread is frequent boasting of flying from Point X to Point Y nonstop at the extreme limits of airplane endurance, often in IMC and/or at night when theres a strong possibility of finding the destination unavailable at the end of the flight. Forgetting the issue of pilot fatigue that may make such flights overly risky, these kinds of boasts may encourage others to attempt similar flights of their own. I lost a friend about a year ago when he overflew any number of airports before running out of fuel and impacting a ditch literally feet short of the runway.

The record shows that there is strong temptation to try to stretch it the rest of the way once within 100 miles or so of our destination-no one wants to have to land so close to the goal, as if it is some sort of repudiation of ones piloting prowess. In fact its the much greater accolade to recognize that a diversion is needed no matter how close to destination, even if that means you cant log onto the chat lines and boast of the nonstop flight.

There are a number of other “gotchas” that can make even good fuel planning go bad in flight:

Loose fuel caps can allow fuel to siphon out in flight. One winter day I flew a Beech Baron from my then-home near Chattanooga, Tenn., to Nashville, about a 45-minute flight. I was picking up a couple of passengers and taking them an hour east to Bristol, Tenn. It was very cold and I determined I had enough fuel to get to Nashville with a very healthy reserve; instead of trying to get a balky self-serve pump to work in the cold I planned to have the FBO top me off at Nashville.

The Baron had inner and outer fuel ports and I wanted only the inboards filled. I had the habit of popping open the caps I wanted filled and telling the FBO to top off only those tanks with the cap loosened. Inside the FBO I watched with my ever-more-impatient passengers while the line staff tried in vain to get their fuel truck started.

I knew I had plenty of fuel for the hour flight ahead and still have plenty in reserve, so eventually I told the FBO Id go with what I had on board; the line staff radioed in that they closed my fuel caps. We loaded up and launched into the cold, clear air. While still in the initial climb after takeoff, one of my passengers, a pilot himself, told me that fuel was streaming from the right wings filler port-in our haste to depart I didnt double-check the line guys and the right inboard fuel cap wasnt tight. I had to land short, not knowing how much fuel I might have lost. Lesson: always check fuel caps yourself, and scan the wings in flight for any sign of fuel venting overboard.

Blocked fuel vents can form a vapor lock that prevents gas from flowing out of that tank. If the airplane has rubber fuel bladders, a blocked vent can cause the bladders to collapse and form pockets from which you cant draw fuel. In extreme cases, blocked vents can cause a metal or fiberglass fuel tank to deform and collapse. Check fuel vents for obstructions before flight, and if youre flying a “known ice” airplane turn on fuel vent heat before entering icing conditions.

Many airplanes require the pilot to manually select between different tanks to access all the fuel aboard. Fuel starvation often occurs when a pilot switches to a tank without fuel, or does not move the fuel selector valve firmly into the detent for the intended tank.

When instructing, Ive found almost all pilots look at the fuel selector valve when switching tanks. I teach instead to move the selector valve by feel while watching the fuel flow/fuel pressure gauge, backed up with EGT. Keep your hand near the selector valve and switch back to the original tank at the first sign of dropping fuel flow or EGT. Ensure power continues then, as time permits, double-check that fuel is available in the new tank and, if so, try selecting it again. Loss of fuel flow on the second attempt is grounds for landing as soon as practical on the original tank-you wont know why you cant fly using fuel from the new tank.

Its tempting to forgo sumping fuel tanks before flight, especially on cold or wet days or when the fuel sumps are in hard-to-reach positions. Just a little water or dirt in the fuel, however, can cause the engine to quit, perhaps while close to the ground. Have the discipline to sump tanks after every fueling and when the airplane has sat for any time when moisture can condense in the tanks.

Fuel totalizers are one of the greatest safety tools developed for aviation. They quantify the fuel burn and count down fuel remaining in a digital cockpit display. If interfaced with a GPS, they can tell you the fuel remaining at your estimated time of arrival. Some glass cockpit displays now draw a range-remaining arc superimposed on the moving map, an oblong circle that even accounts for measured winds aloft.

Pilots who use totalizers almost universally proclaim their accuracy, noting the fuel added when topping off matches totalizer expectation almost to the tenth of a gallon most of the time. As a result, totalizers offer greater peace of mind. But they are only as good as the information pilots put into them.

Admit it: Youve flown a totalizer-equipped airplane without adding partial fuel loads into it. You may find yourself aloft with plenty of gas while the totalizer display is blinking, showing youre using your legal fuel reserves, or even with the display indicating you have no fuel remaining. This aeronautical equivalent of the blinking VCR results from pilot inexperience with the totalizer or bad checklist discipline at the beginning of a flight.

Trouble starts when pilots add partial fuel loads, skip updating the totalizer or if there is a discrepancy between actual fuel added and the amount input into the totalizer. When any of this happens, not only is the information in the totalizer inaccurate, it can provide a false sense of security when fuel becomes critical. To benefit from the amazing fuel management capability of digital totalizers:

Read the totalizers manual and get familiar with procedures for inputting “top off” and partial fuel loads, including variations for auxiliary fuel tank capacities.

When the airplane is fueled, match fuel pump/truck readings and FBO paperwork to your expectations, then input the new fuel load into the totalizer before or immediately following engine start.

For maximum accuracy, turn on the totalizer as soon as possible. Some are wired through the battery master switch; others through the avionics master. Verify your installation.

Add a step to your Engine Start checklist to turn on, input as necessary and confirm fuel totalizer readings before taxiing from the ramp.

Cross-check the totalizer display with other fuel gauges and actual time aloft regularly; land for fuel if you note a discrepancy.

Even if your preflight planning makes it appear you have plenty of fuel, there are a number of “gotchas” that can make that planning meaningless. Fuel planning doesnt end when the engine starts. Beware of scenarios that can leave you up in the air when the fuel runs out.