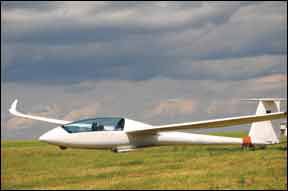 Several years ago, I bought my husband a ride in a glider as a gift, and I latched on to the idea of learning to soar. I had read and heard about how flying gliders could add to the safety of flying an airplane, not only as a result of the skills and judgment learned but also by improving basic stick and rudder work. I was of the opinion whatever basic skills I had were continually being eroded by flying the same airplane the same way year after year.

I fly a Piper Comanche, a fantastic airplane, but I felt raw power and Buick-like flight characteristics were covering my flaws. I wanted something to shake things up a bit and get me back into sensing more of what the airplane was doing and how I was influencing it.

Doubts
Initially I had strong doubts I could land an airplane lacking an engine. Sure—it was going to be on the ground one way or another, and sooner rather than later, at least until I developed some soaring skills. On the other hand, I had plenty of simulated engine-out experience. Let me assure you: They’re not the same.

I’d passed multiple check rides, well within standards, with an engine at idle. I practiced the engine-out standards for my commercial ride over and over again, but the doubt in mind was still there. I never could exchange it for complete confidence that when the engine was gone, really gone, I’d be able to land the airplane without losing focus on the other distractions sure to be present at the time.

I wasn’t born a pilot, nor was I born into a family that had any connection to flying. I didn’t look to the sky and wistfully dream about flying an airplane. I wasn’t one of those types.

Instead, I spent most of my life fearing flying. Given the relatively short time coming to my senses and learning to fly, was it any wonder doubts about my abilities—and what would happen when there was no choice and it was all up to me—were still present?

Differences
I started taking dual instruction aimed at an add-on glider rating. Almost immediately, I found glider flying to be very difficult to learn. It wasn’t the soaring part; it was the landings. The challenge wasn’t maneuvering to find lift and use it to stay aloft. Instead, it was how to land, safely and in control of the glider. Actually, it wasn’t the learning part that was so hard. It was the unlearning of things that had become second nature.

For one, the sight picture for landing is totally different in a glider. I found myself diving at the grass runway and then miraculously, at the last possible second, I was parallel to the ground, slowing down. This could not have been caused by me, the pilot. Landing was obviously a result of will and concentration alone.

I continued with the training for many months but I wasn’t getting any better, feeling any safer or for that matter, having much fun. The confidence I was seeking was turning into a lack of confidence. I certainly hadn’t soloed the glider yet, which sent me the very clear message I wasn’t gaining on my lack of skills.

I also didn’t feel like my instructor was my ally. Had this guy never worked with someone obviously much older than him, and a woman besides? It felt like he never quite knew what to do with me.

Interruption
About the time I realized those factors were telling me loud and clear that I needed to change my approach, life managed to get into the way of my training. This was a first for me, someone who tries to put flying at the top of her priorities list. I rationalized that I could get back into my glider training in a few months, when things settled down. So I stopped the training and put all my energies into other, equally challenging things. Before I knew it, a few months turned into two years.

I hadn’t forgotten my real goal, which was to improve my flying skills. I made the phone call to start training again.

Reconnecting
Nothing had changed the impediments to my glider training—the airport I used was 50 miles from my home, so I wanted to make the most of each trip. One good thing: During my two-year hiatus, the glider operation had moved to a different location on the field, beside a grass runway. To save time, I opted to land on the shorter grass runway used by the gliders, rather than the paved runway nearby. This meant performing a short/soft-field landing for an audience of pilots with wide-ranging experience and skill levels each time I landed. It was intimidating at first but as time went on, the ground rolls were shorter and the landings were exactly where I wanted them. I was beginning to get the hang of this. Whatever “this” was.

Transitioning—or transferring my skills—from landing my familiar Comanche upon my arrival, to landing a glider during the training and then getting back in the airplane for another landing after the commute back to my home airport was noticeable. It actually was taking effort and concentration to adjust from landing the glider to landing the airplane. I even once—once—nearly landed the Comanche nose-wheel-first. Was I making progress?

I was. I went for training one Saturday in September, had three “pattern tows” and performed three spot landings with my instructor before he, quite unexpectedly, exited the glider. He told me to have fun, use my pilot skills and go out by myself. I did three more landings, talking myself through all of the points in the pattern each time. It was just as thrilling an event as my first airplane solo, nearly 10 years earlier.

I’ve done a lot of flying and added to my accomplishments, but there is nothing like a first solo in a new category of aircraft. Nothing.

Fun Parts
Maybe my instructor wasn’t such a bad guy after all. Maybe he had matured in the two years since I had been to training last. Maybe I had.

There continued to be more interruptions to my training, and I even had a second first solo, but I kept chipping away at practicing. And learning.

I learned that what I thought was a forward slip in my airplane was actually a side slip, with a little nose-down attitude thrown into the mix. I can do a pretty serious forward slip in a glider now. And learning how to land with a short ground roll? It means focusing on a landing spot, coming in at the correct speed and barely lifting the nose to bleed off airspeed in the last four feet above the runway. I can do that, too. And the best part is, I can do it without power. The sense of accomplishment to be able to land, roll out and be stopped right where you want to be, every time, is priceless.

I haven’t mentioned the fun parts, like getting towed to 2500 feet agl, gliding over to where a cloud is building, and flying the thermal up to 3500. Or being able to stay out soaring for over an hour, riding up, dropping down, flying around looking at whatever you want to look at—sky, ground, ocean, swamp, roads or best of all, clouds. Yeah, it’s a little corny, perhaps, but maybe we don’t talk about the fun parts of flying enough. We should, because they are a very real reason why we do this flying thing.

Lessons
What did I learn from adding on a glider rating? For one thing, rudder and aileron coordination are a must and the key to flying well. See the sidebar on the opposite page for some discussion of what I learned and how I used it in the glider.

Another thing: Having power available and variable can cover up a multitude of mistakes in flying skills. At least it did for me. It’s not like I had really bad flying skills to begin with, but they are more refined now. For one thing, I no longer worry too much about whether I’ll have the skill and concentration to put the Comanche down in an engine-out situation. Sure—if that ever happens—I’ll still need some luck with terrain, landing areas and weather. But having landed without an engine so many times, the real thing in a (formerly) powered plane won’t be laced with so much uncertainty.

If I had it do all over again, I would have learned to fly a glider before I learned how to fly an airplane, but that’s not how it happened for me. I also learned to deal with setbacks in an airplane, which I had never had to do before. I learned that if obstacles are in the way and you don’t see a way to reach your flying goals, try anyway.