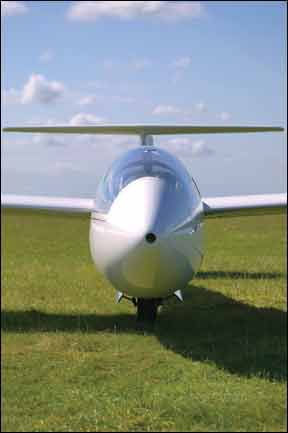 A year ago and mostly for fun, I decided to obtain an add-on glider rating. For any private or commercial airplane pilot, an add-on glider usually can be accomplished in three or four days, provided the weather cooperates. You dont even need a current medical certificate or a drivers license. It also is one of the least expensive add-on ratings an airplane pilot can attain.

Flying gliders is fun, but after flying single and multi-engine aircraft for almost 50 years, glider training also helped me to look at airplane flying techniques with fresh eyes. Here are some of the things I learned.

Accident statistics show small aircraft engine-out landings are highly survivable if the pilot follows his training and flies the aircraft to a stop. Otherwise, the engine-failure stats arent so good. Of course, every glider landing has a lot in common with engine-out emergency landings.

As Captain Sullenberger and First Officer Skiles proved by landing an Airbus in the Hudson River, any airplane can be flown and landed just like a glider. The operational details-such as correct speeds for different phases of gliding flight-will vary for specific aircraft, but the essential principles and concepts are the same: The pilot uses up the airplanes potential energy of altitude to manage the aircraft speed and descent rates. The idea is to run out of both energy and altitude at the end of the engine-out landing roll.

Because glider pilots do not have the luxury of an engine to assist in the making of adjustments to altitude and position or to abort a landing attempt, glider pilot groups and individuals have refined the techniques used by airplane pilots in the different phases of flying.

These techniques enable glider pilots to climb in rising air currents and conserve the potential energy of altitude. In turn, they maximize the time the glider can remain in the air and the distance traversed from specific heights above the surface. Some of these techniques can be very useful for airplane pilots.

For example, a single-engine airplanes POH/AFM will list a best glide speed, VBG. A gliders reference materials may include one or more polar curve graphs. Each graph is a plot of the observed sink rate of the glider at different airspeeds and at specific loads. These graphs are used to calculate best glide speeds and minimum sink speeds.

A glider polar is a graph plotting airspeeds and the corresponding sink rate in still air. In the example presented as Figure 1 on the opposite page, the glider sinks at three knots at an airspeed of 80 knots. The minimum sink speed is the value on the graphs vertical axis corresponding to the highest point on the polar curve. In this example, thats about 1.5 knots.

An example of speeds listed for the L23 Super Blanik, a popular glider training aircraft, is in the table below:

Why not add a similar table to your aircraft checklist, with best glide speeds for 300-pound weight increments? To compute VBG and VA (maneuvering speed) for different weights, use the POH/AFM speeds for max gross weight and the formula shown in the sidebar on page 18.

One of the first lessons learned by a student glider pilot is the pre-takeoff checklist. One item of this checklist is to call out exactly what will be done if the tow rope breaks at any time after the glider lifts off. For example: “If the tow rope breaks while sufficient runway remains, I will land the glider. If insufficient runway remains and Im below 200 feet agl, I will land the glider straight ahead in the most suitable area I can locate. If a tow rope break occurs after passing 200 feet agl, I will reverse course and land.”

During the launch, the pilot calls out “200 feet” at 200 feet agl. The technique for a tow break occurring at just over 200 feet agl is to pitch down immediately for best glide speed and then make a relatively steep banked turn back towards the airport. This is somewhat of a shock for airplane pilots taught to always land straight ahead if power is lost prior to reaching pattern altitude. In a glider, you will still have altitude to dissipate when back over the departure end of the runway for a downwind landing.

Several things can be gleaned from this glider maneuver. I have found that some pilots believe that more altitude is lost in a steep bank gliding turn than in a shallow bank. An average general aviation airplane flying at idle power and at best glide speed may lose more than 2000 feet of altitude in a coordinated 360-degree turn when using a 10-degree bank angle.

The same aircraft will lose significantly less altitude-around 600 feet-in a 360-degree turn when using a 40-degree bank. A 45-degree bank angle results in the least amount of lost altitude during a power-off change of direction. Obviously, you need to know these numbers before an emergency. To determine the correct values for your airplane, climb to a safe altitude and run a few tests to determine and record how much altitude is lost when using 10-, 20-, 30- and 40-degree banks for 360-degree turns with idle power and while holding VBG. If you fly a complex airplane, determine test results with high and low rpm settings, and also with gear up and gear down.

When practicing power-off steep-angle banks, the aircrafts speed will tend to increase. Use nose-up pitch to maintain VBG. Turning back to the runway will require a turn of more than 180 degrees, and then a small opposite direction turn to align the aircraft with the runway. The total degrees of turn is probably around 240. Coordinated flight is critical during the turn. Using excessive rudder in a misguided effort to speed up the rate of turn is highly dangerous.

As long-time readers know, the topic of turning back to the departure runway when the engine fails shortly after takeoff has been explored extensively. The most exhaustive discussion in these pages was Rich Stowells treatment, “Turnbacks Reconsidered,” in our January 2006 issue. That article was based on a simulator-based study. The conclusion then and now? Youre better off landing straight ahead after an engine failure shortly after takeoff in a single.

Of course, the only way to know what altitude above ground is the minimum required for the pilot to safely return to the runway upon losing power is to practice the maneuver at a safe altitude. Being comfortable with this knowledge and having practiced the maneuver will be worth real money if youre ever faced with the challenge of a loss of power before reaching pattern altitude. Youll know much more about whats required to safely return to the takeoff runway and-more importantly-when you cant. Before conducting such practice, of course, review the numbers for bank angles and altitude loss for power-off 180-degree turns prior to takeoff.

Another item noted by glider pilots during the pre-takeoff checklist is the direction of any crosswind. Glider tow planes routinely turned 10 to 20 degrees towards downwind immediately after takeoff. If a tow break occurs after 200 feet above ground level, the glider pilot turns into the wind when executing the turn back to the field. Turning into the wind results in the slowest groundspeed and the least number of degrees of turn to be aligned with the takeoff runway.

Top performing gliders have glide ratios around 60:1. In still air with 1000 feet of altitude, they would be able to glide 10 miles before landing. Glider training aircraft typically have a glide ratio of around 30:1. Most light airplanes have glide ratios of around 10:1. A GA airplane would need at least three times as much altitude to execute the same maneuver as a training glider. To know the best bank angles to conserve or dissipate altitude in your aircraft after power loss, you must determine them before an emergency occurs that may require their use.

The most serious safety issues regarding loss of power (when the airplane instantly converts to a glider) happen between the time the aircraft begins rolling and pattern altitude is achieved. Many airplane POH checklists include an item for a pre-takeoff briefing. If done correctly, the pilots call out to themselves, crew and passengers the exact plan in the event of power failure at each step of the takeoff sequence. It should include several decision points and the best location for a crash landing if insufficient runway remains, and the altitude from which a turn back to the airport can be considered safe.

Properly done, a through pre-takeoff briefing of all aircraft occupants provides the best chance of everyone walking away unhurt from one of the most serious challenges that may be faced by a pilot.

First, the glider pilot can adjust the angle by moving closer to or further away from the runway while on the downwind or base leg of an approach. Second, the pilot also can extend or shorten the downwind or base leg. Last, the glider pilot can use or not use the dive brakes or spoilers to help achieve the correct angles. The downwind distance from the runway and the altitude of the pattern are not the critical factors. Recognition of the appropriate angles is critical.

Pilots often vary greatly in their estimates of horizontal distances, which at a busy airport results in a lot of confusion and frustration. Substituting airplane flaps for glider dive brakes or spoilers, airplane pilots have same three tools glider pilots use to make adjustments to approach and landing angles. Airplane pilots would achieve more consistent and better results if they focused more on the vertical angles to the runway and touchdown down point and less on horizontal distances.

Flying a glider isnt much different from operating a powered airplane-the flight controls work the same way while navigation, communication and regulation fundamentally havent changed. What does changed, of course, is the lack of an available and variable power source, allowing the power pilot to correct for mistakes or errors in judgment. To compensate, glider pilots plan ahead, use more refined procedures and fly as if every landing is a forced one. These arent bad habits for airplane pilots to adopt.