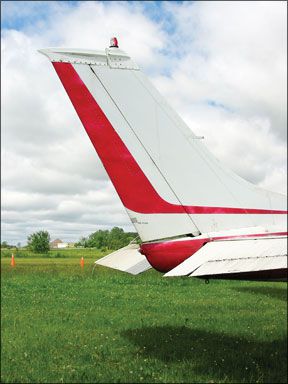 By failing to correctly understanding the rudders purpose, these pilots exhibit a failure in our training system. Moreover, by misusing the airplanes primary controls, they arent flying it properly or efficiently. This realization has many implications-an indictment of our training systems among them-but the dangers of misusing the rudder also must be acknowledged. Lets discuss the rudders proper role, plus the effects and dangers of misusing primary controls.

To begin, lets review some basic terms and concepts involving an airplanes physics and aerodynamics, supplemented with the graphics appearing in the sidebar on the opposite page.

First of all, it shouldnt be revelatory for a pilot to understand the center of gravity (CG) is an imaginary point where the entire aircraft would be in perfect balance. At this point, the combined weight of all parts of the aircraft can be considered to be concentrated and pulled toward the center of the earth by gravitational force. The CG is normally located near where the pilot of a small aircraft sits. Further, if we could suspend the aircraft by its center of gravity and oriented in any position, it would remain in that same position unless disturbed by an external forces. Possible candidates among these external forces may include but are not limited to power application, centrifugal force, control deflections and wind gusts.

A byproduct of lift creation is drag. Put another way, any time we create lift, we also are creating drag (induced drag, to be precise). In straight-and-level flight, lift is being created; so is induced drag. Rotation around the longitudinal axis-rolling the airplane-is produced by deflecting downward the aileron on the rising wing to increase its angle of attack and thus increase the lift it produces. On the other side where the wing is descending, the aileron is deflected upward, decreasing the lowered wings angle of attack and lift.

In normal turns, yaw pushing the nose in a direction opposite the roll direction is an undesirable result, hence the term “adverse yaw.” The pilot can counteract adverse yaw with rudder pedal pressure in the same direction as the descending wing or intended turn direction. The amount of rudder pedal pressure required depends to some extent on the aircraft design but, primarily on the amount of aileron deflection being used which is directly related to the rate of roll.

At this point, its critical to recognize rolling the airplane-or rotation around its longitudinal axis-by itself cannot change the airplanes heading. As evidence, we note a 360-degree roll-by itself-does not result in any change of heading or direction.

Next, consider what happens if we use rudder without also deflecting ailerons or elevators. Pressing the rudder pedal will produce yaw in the direction of the depressed rudder pedal but will also produce some roll. This roll results from the wing opposite the depressed rudder side traveling through the air slightly faster than the other wing. This wing thus is creating more lift. Pilots use this phenomenon to raise a dropping wing when practicing slow flight and stalls near the stall speed as ailerons lose effectiveness. In fact, ailerons actually can reverse their normal effect if the wings are very close to being stalled.

A person lacking a clear understanding of the principles of flight might assume that the rudder of aircraft acts like the rudder of a boat. A boats rudder is used to make the boat travel in a curved path. However, the purpose of an airplanes rudder is completely different.

A pilot-operated rudder is not absolutely required in an airplane design. One small general aviation design, the Ercoupe, has no rudder pedals but does have two rudders. Instead, the Ercoupes rudder deflection is mechanically connected to the aileron controls. When its ailerons are deflected, the rudders also are deflected to counteract adverse yaw.

Every safe and conscientious pilot needs a deep understanding of the correct role of rudders in flight, and especially that rudders are not intended to turn the aircraft. Any pilot who holds any mistaken belief that the rudder might sometimes be used to help accelerate the rate of turn of an aircraft, is a pilot flirting with potential disaster.

Perhaps foremost, a pilot must understand he or she should never use the rudder to help speed up a banked turn. Too often, and when rudder is used in an attempt to increase the turn rate without a corresponding increase in bank-as traditionally may occur when a pilot overshoots the turn from base to final-the result is a stall/spin from an altitude leaving little room for recovery.

Consider the following scenario: At a busy airport with several planes in the pattern and after reducing the speed of the aircraft to slightly above final approach speed, a pilot misjudges the time or distance available on a base leg (possibly because of a strong tailwind on the base leg). Realizing that he will not be able to make a normal shallow bank turn to final, and instead of immediately deciding to go around, he decides to increase the airplanes bank angle to turn faster. This increases the load factor or G-force the airplane is experiencing. Next, he realizes that he will still go past the normal final approach path with his already steep bank and feeling pressure to salvage this approach and landing, steps on the rudder in the turn direction to help turn faster.

The main effect of this rudder application is to steepen the bank-because rudder has a yaw and a roll effect-while pushing the tail towards the sky and the nose towards the earth. Realizing the nose is uncomfortably low; he adds elevator force to bring the nose up. The steep bank had already increased the G-loading and thus the stall speed. Increasing elevator force to bring the nose up increases the load factor and thus raises the stall speed even more. At this point the aircraft is experiencing a strong yaw force and may experience an accelerated stall. These are all the conditions necessary for the aircraft to enter an unrecoverable and fatal spin.

The rudder may be the most misunderstood-and improperly used-of the three primary airplane controls. Improving our understanding of how each of them works will help make our flying safer, more efficient and more enjoyable. Well also work at it a bit less.

Even though the rudder is the focus of this article, the other controls deserve attention, too. Theyll get it in a follow-up piece, coming soon in a future issue.