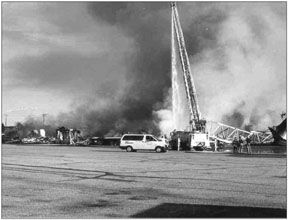 Hangars are often thought of as garages or warehouses for aircraft. Ideally, they would contain nothing more than sheet and stamped metal, fabric and composite materials assembled into something that flies. There would be no volatile fluids, oil-soaked rags, electricity or heat sources. Of course, the reality is quite different: The modern hangar is large container equipped with multiple ignition sources, a plentiful supply of aviation fuel, dangerous projectiles and highly valuable-sometimes one-of-a-kind-aircraft. While aircraft hangars do not spontaneously ignite, taking scores of aircraft with them, the relatively few examples do come with high price tags.

Aircraft insurance companies generally concur: While the number of hangar fires is low, the severity of the loss is high.

Bad dreams
We talked to FBOs, engine overhaul shops and hangar owners-nearly all of whom could remember hearing about at least one major hangar fire during their aviation career; although none had experienced a fire personally, several had close encounters. Every aircraft owner we talked to conceded that a fire in the hangar bay ranked number one among their worst nightmares.

Its an easy nightmare to conjure. In one instance, a Missouri pilot attempted to preheat his hangared airplane by placing a radiant heater under the engine compartment. He connected the heater to a distant electrical socket with a series of household extension cords. The pilot turned on the heater and then left the area to get a cup of coffee while the airplane warmed up-which it did quickly. The electrical load was too great for the cords and they shorted, apparently spewing sparks in the vicinity of a weeping fuel sump in the wing of the airplane. The loss included the airplane and a couple of other aircraft in the nested T-hangar.

In northern Minnesota, a couple of A&Ps were using an electric screwdriver to remove a fuel cell from a 400-series Cessna; when the fuel cell burst into flame, the aircraft was towed out of the hangar and allowed to burn itself out on the ramp.

Close calls can produce bad dreams for many months. A Minneapolis-based A36 Bonanza that had just suffered a prop strike was pushed into an FBOs storage hangar late one afternoon. The next morning a mechanic opened the door, smelled fuel and found the floor of the hangar covered with 100LL that had drained from the Bonanzas tanks, apparently through a damaged fuel selector. All of the aircraft in the hangar were carefully towed to the ramp and the hangar floor was flushed.

The FBO said that he thought about that close call for months. We made some changes in our routine, he said. We inspect all airplanes before they are returned to a hangar for the night.

Unsafe Practices
Some fires in hangars are caused by so-called hot work-maintenance projects that involve welding or soldering, for example, in which some combustible becomes ignited and is doused on the spot-but rekindles many hours later. Construction and maintenance projects have produced incendiaries that go undetected until the hangar is closed for the night. Airport night patrols have caught more than a few of these potential disasters.

Sometimes luck runs dry and a hangar ignites in the middle of the night for no obvious reason. One hangar burned to the ground at Grand Island, Neb., in 2002 taking two Great Lakes Airlines Beech 1900s with it. The cause of the fire remains under investigation.

Urban legend has it that most hangar fires are caused by careless engine preheating-the primary cause of fires in T-hangars, according to insurance agents. But simple housekeeping accidents have also contributed to multi-million dollar losses. A hot plate was left on in a flying clubs hangar lounge where it ignited its table. The fire spread to the walls and was well on its way through the nested T-hangar complex before a local fire department arrested the six-figure blaze. Coffee pots, space heaters and air conditioners improperly connected to distant electrical outlets with a string of substandard extension cords have caused fires in offices and lounges that adjoin aircraft storage and maintenance hangars.

An FBO who sponsored public flight breakfasts in his hangar for years without an incident, bringing into a hangar hot griddles, grease, mounds of waste paper and hundreds people-some smoking cigarettes, lost the hangar in the end to a pilot who left a hair dryer running on a airplane seat in an attempt to warm up a cockpit.

It all comes down to being aware of whats going on in your hangar, New Richmond, Wis., FBO John Strand said. A maintenance hangar is likely to have several projects running at the same time; someone needs to be sure that each project has been cleaned up with stuff turned off at the end of the day. I walk through my hangar before I go home. The owner of a private hangar, freestanding or in a tee, should do a routine inspection before closing the door and going home. Unplug heaters and fans; turn off air conditioners, empty the trash. If the coffee pot is still on, turn it off before you leave the hangar. If youre preheating the engine or cockpit with anything but an approved engine heater, stay with the airplane.

Insurance Coverage
Because they are infrequent, you probably wont find the phrase hangar fire embedded in the small print of your aircraft insurance policy; your protection is right out there in the open under Aircraft Physical Damage Coverage. Read your policy carefully to determine what the effects of additional insurance-such as hangar insurance-will have on your claim.

Generally, your aircraft insurance covers the airplane, parts removed from that airplane and personal property used to operate the airplane-headsets, handheld navs, are examples. And generally your hangar insurance covers property not associated with the airplane-a car, office equipment and furniture. Because hangar fires-and other losses-are so expensive, premiums are very high. An aviation insurance executive told us that aircraft owners are pleasantly surprised how easily a fire claim is settled. But the same guy is horrified at the premium he has to pay. A bank of 12 nested T-hangars can house $1 million worth of aircraft and all of that can be destroyed by a $5 hot plate before the local fire department can get through the gate.

Lease agreements
Many hangars have become storage facilities for the familys latest power-toys: ATVs, snowmobiles, motorbikes, boats, cars and RVs. Most pilots have observed younger family members park a motorbike or four-wheeler in the family hangar, close the door and go home. The ATV may parked on a piece of cardboard, so the mud and hot oil wont stain the floor. If that hangar is a box in your bank of tees and the hot engine, fuel vapor and a combustible is parked next to dads 210-two doors down from your Mooney with no one around-you might well be nervous. The chances for a fire may be slim, but if it happens, its going to be a doozy.

As a result of this concern and the perceived need to regulate casual hangar activity, airport authorities and hangar associations are leaning toward ever more stringent lease agreements. Many agreements prohibit any activity that is not strictly aircraft storage or limited servicing. Agreements may point out that electrical systems serving the hangars are not designed to bear the additional electrical loads of coffee pots, portable heaters, appliances and power tools and prohibit the use of these devices. Agreements may prohibit tenants from resetting circuit breakers or in any way modifying the service in a hangar bay. Even relatively lax agreements prohibit fueling an aircraft in a hangar or storing fuels. Many agreements stipulate a distance that must be maintained from the front of a hangar to an acceptable fueling point.

Airport authorities employ similar agreements-with widely varying restrictions-for tenants who plan to construct freestanding hangars. Whether you are planning to rent or build hangar facilities, read the agreement carefully. When fire is the threat you can expect that there will be no wriggle room in a lease agreement, no post-construction variances; you and the landlord ought to have a well-defined agreement of how the hangar will be used before you lease ground or a bay in a T-hangar.

What Smokey Said
Theres very little in our flying lives that drive emotions like fire. If youve never seen a hangar fire you dont know the feeling of complete helplessness. That emotion drives what may seem to be ludicrous restrictions on the one hand and total absence of mention in an aircraft insurance policy. A hangar fire is both a rare occurrence and total devastation. In the end-as Smokey The Bear has pointed out for 50 years-only you can prevent hangar fires. T-hangar assemblages require a vigilant and cooperative community-and often, unpleasant restrictions. Freestanding storage hangars, maintenance hangars and family recreational facilities require a disciplined routine-another checklist in our flying life-to preserve your right to operate on an airport.