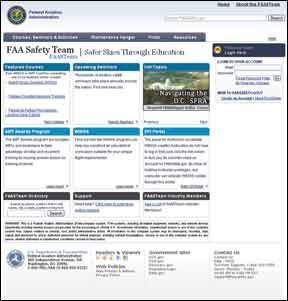 We in the general aviation (GA) community are fond of poking fun occasionally at the FAA. Most of the time, its to highlight a perceived and sometimes real tension between the community and the agency. Frequently, this takes the form of tired clichs such as, “Im from the FAA and Im here to help you,” or another mythical phrase such as, “Were not happy until youre not happy.” When I was FAAs lead

GA executive in the early 2000s, my favorite became, “Weve just upped our standards, now up yours.”

It may not always look like it from the field, of course, but in reality the majority of FAA employees are working closely with their industry counterparts, making a best faith effort to address GA safety issues, both at the national level and in our own backyards. The key question is whether or not such cooperation has been effective in addressing key safety issues and reducing the stagnant GA fatal accident rate.

In Our Own Back Yard

Most of the GA community is familiar with, and supports, the FAAs proactive grassroots safety program. The FAA Safety Team (FAAST, as it is currently known) has been around since 1971 in one form or another, starting as the Accident Prevention Program and evolving over the years into its current incarnation. The program consists primarily of the well-known Wings Program and live and on-line seminars, hosted occasionally by FAA staff but predominantly conducted by volunteers known as FAASTeam Representatives.

Due to FAA resource constraints, the agency is moving towards more online delivery of both safety materials and courseware. This has met some resistance from some folks who liked the live, in-person seminars, which sometimes included FAA staff and industry presenters telling “war stories.” Some of these events still take place but, in general, the FAA is trying to deliver a more professional safety promotion product addressing critical safety issues.

Some critics of the FAAST program, and its predecessor efforts, contend that the program only reaches the “church goers”-those conscientious enough to attend similar meetings usually dont pose a safety risk-and does not reach those who are most likely to have accidents. There is some truth to this, since ones willingness to embrace a safety culture will affect that persons willingness to participate in voluntary safety education efforts. So its fair to wonder whether FAA and industry safety priorities are effective in reaching the entire community, rather than just the “believers.”

We should also look carefully at FAAs safety priorities, and ask whether they target fatal accident causality or whether they address “flavor of the day” events. For example, with all the recent emphasis on runway safety, one could conclude hundreds of GA pilots are dying each year from runway incursions and related accidents. Obviously, this isnt the case. Instead, we actually need to look at FAA/industry national safety priority development processes to see how priorities are actually set.

The current process for FAA and industry safety cooperation at the national level dates to the mid- and late 1990s. The widely publicized ValuJet accident in 1996, along with other events, triggered this and resulted in the Safer Skies program. The airline part of this effort led to the formation of the Commercial Aviation Safety Team (CAST). The FAA and industry, through CAST, set an ambitious goal of reducing the airline fatal accident rate by 80 percent over a 10-year period, generating some industry skepticism and even cynicism that such a goal was unrealistic.

The GA component of Safer Skies was added almost as an afterthought but, in due course, a General Aviation Joint Safety Committee (GAJSC) was created and began to meet regularly. Both the CAST and the GAJSC followed a similar process for analyzing safety data and crafting safety interventions, although CAST followed a more rigorous and documented data analysis effort. Also created were the Joint Safety Analysis Teams (JSAT), often followed by a Joint Safety Implementation Team (JSIT). These panels were formed to dive down more deeply into NTSB accident reports in an attempt both to divine the true cause of an accident and then devise ways-training, regulations, policies and/or other recommendations-to prevent them in the future. The sidebar on page 10 highlights their activities in greater detail.

So, cutting to the chase, how effective have FAA/industry efforts been in addressing safety issues and accident rates? Well, the airlines have achieved an unprecedented 74 percent reduction in fatal accident rates over about the last 13 years, almost equal to their goal of an 80 percent reduction over 10 years. In fact, the rate has been reduced so much that many in the airline community and FAA believe that the remaining accident causality is so random it precludes proactive analysis and remediation.

That attitude quickly evaporated after the Colgan Air Flight 3407 accident in February 2009 when two fully functional pilots unintentionally stalled a fully functional airplane, killing everyone on board, plus one on the ground. The resulting publicity and the usual dose of safety politics intervened to produce some truly strange results, but thats another story.

Meanwhile, the CAST soldiers on in virtual anonymity, with neither FAA nor industry telling the public, or Congress, the story of how successful the CAST was in achieving its mission, and that the best results come from hard analysis rather than amateur efforts by the U.S. Congress.

What about the GAJSC Goal?

The story isnt quite as dramatic on the GA side of the world. The GAJSC activities didnt get really moving until 1999, so it would be fair to ask, whats happened to the GA fatal accident rate over the last ten years, say, from 2000-2010? The answer is…not much. The GA fatal accident rate has hovered stubbornly around a range of about 1.20-1.30 accidents per 100,000 flight hours throughout. Some in the community have crowed about the reduction in the raw number of fatal accidents, but thats due solely to the reduction in GA flight hours, not any real improvement in the safety record.

Thats right folks, two orders of magnitude better. Surely it cant be the regulated environment alone; after all, corporate turbine GA flights operating under Part 91 have a record about as good as the airlines.

Okay, so they have two pilot professional crews and turbine equipment like the airlines. Still, how can that account for the entire gap? See the sidebar on page 9 for some ideas, then check the one above for ways you can implement your own risk-reduction program.

The FAA and industry are beginning to realize a new approach is needed to tackle the plateau in the GA fatal accident rate. For one thing, the FAA and industry have not met their joint goals for GA accident reduction in the last two years. (As an aside, this means FAA executives werent paid the portion of their bonus tied to that metric. This tends to get your attention as an FAA executive, as I can attest.) As I discovered and knew from the beginning, and as Im sure my successors have discovered, there is no way FAA alone can succeed. Even with industry assistance, real progress will only occur when the GA culture and training system have changed, and individual members of the community embrace those changes.

Just before writing this article, I attended a regular GAJSC meeting in Washington, representing the Society of Aviation and Flight Educators (SAFE). Change may be in the wind as the GAJSC considers different strategies and approaches. One challenge is how to craft a strategy that meets a goal of FAA Administrator Randy Babbitt to reduce the GA fatal accident rate by 50 percent over 10 years. Accordingly, the GAJSC will begin another data analysis effort that may point the way to the next round of interventions. Both I and some of my industry colleagues emphasize the need for better accident root-cause analysis that could reveal the role of improper risk management in most GA fatal accidents. Most also agree that a 50-percent fatal accident rate decrease is impossible-unless the safety culture and training issues are addressed.

This process could take awhile to unfold, and even longer to demonstrate if we can succeed. Meanwhile, SAFE has elected to jump-start the training reform effort by conducting a Pilot Training Reform Symposium in Atlanta on May 4-5, 2011. Interested readers can learn more about this effort at the Symposium Web site,

www.pilottrainingreform.org. Other elements in the GA community also seem interested in pilot training reform, although this interest is largely focused on industry growth, rather than safety. One example to watch is AOPAs Flight Training Student Retention Initiative announced at last years AOPA Summit.

Bob Wright is president of Wright Aviation Solutions LLC and is a retired FAA Executive. He holds Airline Transport Pilot and Flight Instructor certificates and has more than 9200 flight hours. The opinions expressed in this article are not necessarily those of any client or organization that he represents.