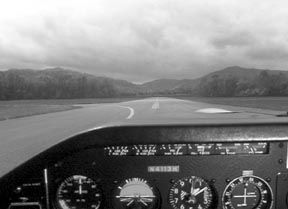 One late January evening, I was at a motel in Flagstaff flipping through the TV channels. It was news time and a talking head with an airplane in the background froze my channel surf.

He was speaking about a recent airplane accident, and he spoke intelligently about the aircraft, the airport and the accident investigation process. I silently thanked the TV journalist for finding a qualified source with which to help report the story about a pressurized Aerostar that hit a mountain just east of the Scottsdale airport shortly after a nighttime departure.

The next day I kept thinking about the accident and what would cause a capable twin-engine aircraft – in typical Arizona VFR conditions – to fly into a mountain.

Everything the talking head discussed pointed to one of the leading causes of aircraft fatalities worldwide – controlled flight into terrain, otherwise known as CFIT. The particular strain of CFIT that seemed to be behind this accident is where the airplane hits terrain near the airport before reaching the cruise phase of flight.

According to the NTSB preliminary report, the accident aircraft arrived from San Diego on an IFR flight plan at 6:11 pm, a few minutes after sunset, but well before the end of nautical twilight at 6:54 pm. The pilot may have been able to see the terrain into which he flew a couple hours later.

At 8:16 pm, with moonless night conditions and unrestricted visibility prevailing, the pilot called Scottsdale clearance delivery and requested VFR flight following to Santa Fe, N.M. The controller denied this request and advised the pilot to contact Phoenix for radar services after departure.

A minute later the pilot radioed ground for taxi and at 8:20 pm the pilot called the tower ready for departure from runway 3. He requested a right turn after takeoff, which was granted.

Witnesses living at the base of McDowell Mountain, about five miles northeast of the airport, said they heard the airplane and saw its lights. They reported that the airplane was starting a right turn when a large fireball erupted coincident with the airplanes collision with the mountain. The airplane hit a 60-degree slope 100 feet below its crest on a magnetic bearing from the airport consistent with a direct course from Scottsdale to Santa Fe. The pilot and his wife, the only people on board, died in the crash.

The tragedy is made worse by the fact that this kind of accident is hardly unique.

In August 1999, a pressurized Cessna 210 took off from Morrisville-Stowe State Airport on an IFR flight to Harrisburg, Pa. The airplane departed runway 19 with a void time clearance, made a straight-out departure and climbed into the ceiling estimated to be 800 to 1000 feet agl. The pilot contacted Boston Center, but the aircraft hit a mountain eight miles south of the airport before radar contact could be established.

A family of three and their dog perished in the accident. This airplane also hit just below the mountain summit.

Unseen Terrain
These accidents, one during good VFR conditions and one during IFR, share a common thread: The pilots were unable to see the terrain they hit and were seemingly unaware that it existed. Very few people intentionally fly their airplanes dangerously close to terrain or obstacles.

Whether youre departing VFR in marginal conditions or at night or IFR at anytime, terrain and obstructions surrounding the departure airfield must be ascertained. There are several ways to satisfy yourself that you have prudently borne this responsibility.

One of the best ways is to study the local area on a sectional aeronautical chart to get a lay of the land. In both of the accidents above, the terrain is depicted on a sectional. Its unclear, however, whether either pilot bothered to look at one before departure.

An even better source for terminal area terrain and obstruction information is the VFR Terminal Area chart if one is published for your departure airport area. One is published for the Phoenix area, which includes Scottsdale, but is unlikely that a transient pilot on a two-hour stopover would have purchased one.

IFR charts contain some terrain and obstruction detail. A few years ago, Jeppesen and NOS made a most welcome change to their products when they started including terrain contours on terminal area and approach charts. Theyve always marked the altitude of significant obstructions and points of highest terrain on their approach charts. Reviewing those charts will provide situational awareness almost as good as a sectional chart.

The most valuable terrain and obstruction clearance information included with NOS or Jeppesen instrument charts is the departure procedures information published in the Take-off Minimums and (Obstacle) Departure Procedures section of every NOS approach chart volume or on the Jeppesen 10-9 airport diagram chart for the airport. For IFR departures, this information is literally a lifesaver.

The C-210 pilot departing Morrisville apparently was not aware of the published obstacle departure procedure for the airport or disregarded it. According to the published procedure, after departing runway 19 the pilot should have made a climbing right turn to an NDB about 2.5 miles northeast of the airfield, entered a hold and climbed to 3,500 feet before proceeding on course. This would have taken him in a direction opposite of his intended route, but it would have kept the aircraft clear of terrain.

A Jeppesen manual was found in the aircraft wreckage but an FAA investigator made an interesting discovery. When checking the validity of the information Jeppesen published, the investigator noted that the departure procedure was not published in the NOS volume. While this omission had no bearing on the accident since the pilot apparently did not use NOS charts, it was added to the pertinent NOS volume post-accident.

In creating an instrument approach, designers make an obstruction analysis for the airfield. If an aircraft can turn in any direction from a runway and remain clear of obstacles, that runway has what is termed a diverse departure assessment and no ODP is published for that runway. A DP may still be established for ATC purposes, but it is there to provide for orderly traffic flow and to reduce pilot/controller communication.

The criteria used to provide obstruction clearance assumes that the pilot will cross the departure end of the runway at least 35 feet agl and climb to 400 feet agl before making an initial turn. It also assumes the airplane will climb at a gradient of at least 200 feet per nautical mile.

If the instrument approach procedure designer finds that an ODP is required, he has several options from which to choose to provide obstacle clearance:

2) Establish a steeper than normal climb gradient with an alternative that increases takeoff minima to allow the pilot to visually remain clear of obstacles;

4) Use a combination of all three methods.

A pilot departing an airfield with an ODP is authorized to fly that procedure without specific ATC clearance unless an alternate departure procedure has been assigned.

Making the Gradient
Sharp pilots will notice that whenever the FAA references minimum climb requirements, whether it be engine-out climb requirements for multi-engine aircraft certification or when designing instrument procedures, the performance requirement is never expressed in a minimum rate of climb.

Theyre always given in a minimum climb gradient expressed in how many feet per nautical mile must be climbed. The reason is clear: To clear obstructions, altitude has to been gained in horizontal distance and not over time.

To figure what rate of climb is required to make good a specific gradient, divide the aircrafts groundspeed by 60 and then multiply the result by the required gradient. For example, assume an airport at 1,500 feet msl has an ODP that requires a climb gradient of 420 feet per nautical mile until reaching 4,800 feet. The airplane youre flying and the wind speed and direction determine that your groundspeed in the climb will be 100 knots. The aircraft must climb at least 700 feet per minute through 4,800 feet, which can be a tall order for a typical GA airplane, loaded up on a warm day.

Pilots equipped with an E6-B or similar circular slide rule can easily make the same calculation by positioning the speed/time index under their anticipated groundspeed and reading the rate of climb required on the outside scale over the gradient on the inner scale.

Note that this equation is heavily influenced by wind. A headwind or tailwind experienced during the climb has a profound effect on an airplanes climb gradient. For once, a headwind is a good thing and a tailwind is bad. The Morrisville C-210 pilot essentially sealed his fate when he took off, straight out, with a tailwind estimated to be 15 to 20 knots.

ODPs and ATC
When departing an airfield using an ODP, dont automatically assume youre clear of obstructions when you hear radar contact. Continue flying the ODP until joining the enroute portion of your ATC clearance or until you receive radar vectors.

Once the controller begins to provide navigational guidance in the form of radar vectors, ATC assumes responsibility for obstacle clearance. Even so, dont lose situational awareness and try to ensure the controller doesnt have you zig when you need to zag.

ATC may issue radar vectors to an aircraft on departure that is below the minimum vectoring altitude if the aircraft is in a diverse vector area. In that case, it is assumed by ATC that the aircraft will maintain at least a 200 feet per mile climb gradient, which translates to 333 feet per minute for an aircraft flying at 100 knots groundspeed. In other words, if youre in that gray area, keep it climbing.

If ATC vectors you off an ODP or DP, assume that it has been cancelled unless ATC adds expect to rejoin as part of the vector clearance. If instructed to rejoin, the controller will reissue all applicable altitude restrictions or advise you to comply with the published restrictions.

If youre a VFR pilot taking off at night or in marginal conditions without access to the published ODPs or if youre departing IFR from an airfield without an instrument approach, you have to do your own performance engineering.

Much of a pilots flight planning energy goes into researching how to safely approach an airport. The two accidents cited here are proof that departing can be just as dangerous. Before your next nighttime or IFR departure, take a few minutes of your pre-flight planning to get a lay of the land and look over any ODPs published for your airport.

Bill Kight is a Mooney owner and training captain for a Part 121 carrier.