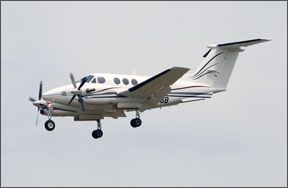 Twin-engine airplanes certified under FAR 23 do not have the same performance guaranteed for transport category airplanes certified under FAR 25. Especially, light twins weighing less than 6000 lbs and have VS0 equal to or less than 61 KCAS are not required to have any positive single-engine performance. Twins weighing more than 6000 lbs and/or having VS0 above 61 KCAS must demonstrate, in still air at 5000 ft, with the inoperative engine feathered, a climb gradient of 1.5 percent (if

certified after February 1991), or a rate of climb of 0.027 V2S0-not exactly earth-shaking performance.

We often hear that losing an engine in a light twin-engine airplane is far more dangerous than losing the only engine in a single-engine airplane. Melville Byington Jr. (1989 and 1993) of Embry-Riddle Aeronautical University conducted an experimental study of the bank angles required to obtain the zero sideslip flight, and consequently, the maximum performance in light twins. Based on the NTSB accident data, Byington concluded that 30 percent of twin-engine airplane accidents occur due to the loss of directional control (VMCA rollover), while 43 percent can be traced to insufficient performance with one engine inoperative (OEI). The remaining 26 percent or so are stall/spin accidents, which also carry the highest fatality rate. Evidently, more accidents happen due to the inadequate SE performance planning or understanding, than due to the control problems.

A way to neutralize sideslip with asymmetric thrust, reduce drag and the minimum air control airspeed VMCA, is to bank slightly into the operative engine (“raise the dead”). Some rudder is still necessary and the inclinometer ball will be displaced off-center and toward the operating engine. A yaw string is the best, and cheapest, way to adjust for the zero-sideslip flight.

On the opposite page, in Figure 1, a twin-engine airplane with OEI and with a bank angle of F degrees is shown. The main questions are: What bank angle will result in a zero-sideslip? Is this optimum bank angle always constant and is it always the oft-mentioned five degrees?

In the case of zero-sideslip forward flight, the lateral aerodynamic force of the rudder and the lateral weight component will be balanced, as shown by the equal-length black arrows in Figure 1. The angle required to obtain the optimum or zero-sideslip is the result of a formula you wont have time to compute when flying on one engine. Its reproduced on the opposite page, at the bottom.

The ratio “a/b” is typically between 0.33 and 0.45 for light twins. This ratio is not constant throughout the flight envelope however, and will depend on the actual angle of attack, sideslip angle, direction of the propeller rotation, P-factor, etc. For an airplane with sea-level (SL) standard-day (ISA) thrust-to-weight (T/W) ratios of 0.20-0.25 with both engines operating at VYSE, and the single-engine (SE) T/W ratios of 0.10-0.125 at VYSE, the zero-sideslip bank angle is somewhere between 1.90 and 3.20 degrees, not the standard five degrees drilled into many multi-engine students.

These conclusions are based on T/W ratios extracted from manufacturers published data for different aircraft, presuming of course new engines and propellers, along with perfect technique. Obviously, an older engine and propeller will produce less power and propulsive thrust, at the same DAs, and that will affect the optimum bank angle.

In Table 1, on page 18, the sea-level, standard-day zero-sideslip (optimum) bank angle calculations for F as a function of the weight for three popular light twins are summarized. These include the Piper Aztec (PA-23-250), a Cessna 310 equipped with 285-hp engines and a Piper Seminole (PA-44-180). As is apparent from Table 1, the change in optimum bank angle with weight reduction is relatively minor over the range of weights, from the maximum takeoff to practical minimum in-flight weights.

In Table 2, at left, the zero-sideslip bank angles are calculated for a DA of 5000 feet. In Figure 3, bottom left, the changes in optimum bank angle for the different in-flight weights and density altitudes for a PA-23-250 are summarized. Similar graphs can be designed for the Cessna 310, PA-44-180 or for any other light twin-engine airplane.

Multiengine pilots should understand, however, flying at the zero-sideslip or optimum bank angle when OEI in light twins does not guarantee any climb performance at all. Instead, doing so merely means overall drag is minimized. This is a critical operational consideration when conducting drift-down with OEI, as using such technique will maximize range. However, the element often missing from complete understanding of the aerodynamics involved is the optimum bank angle will change with altitude and weight when descending.

The performance calculations in light twins are especially critical when planning IFR departures into IMC conditions. Many smaller airports from which light twins operate include obstacle departure procedures (ODPs). Whether by incorporating minimum visibility and ceiling requirements, or by requiring a minimum climb gradient in IMC, complying with an ODP in a light twin with OEI may not be possible.

When an ODP is not published for a given runway, a pilot may assume the FAA-mandated minimum climb gradient required is 200 ft/nm, which is about 3.33 percent gradient. To meet this requirement, the twins wheels also must cross the runways departure end at a minimum of 35 feet agl.

Especially when considering ODP requirements, there is absolutely no reason multiengine pilots should not adjust the parameters under their control to achieve the minimum safe climb gradients if one engine fails. For example, pilots often have full control over the takeoff weight and choice of runways, along with limited control over DA (e.g., leave early in the morning). If a pilot simply keeps the SE service ceiling a couple thousand feet above the airports DA, the improved SE performance may give a pilot more options. But how much (or little) must the airplane weigh to achieve the required performance? Put another way, how can pilots determine the maximum allowable takeoff weight (MATOW) in order to meet the departure climb requirements?

Imagine an IFR departure restriction requiring 350 ft/nm climb gradient (3.30 deg., or 5.8 percent). Can you out-climb the obstacle(s) ahead if one engine fails? The required average ROC to clear an obstacle straight ahead can be approximately estimated from the actual average groundspeed (GS), in knots, and the required climb gradient angle of climb (AOC).

Reducing aircraft weight has two positive effects on climb performance. First, the ROC increases inversely to the weight reduction. Halve the weight and the ROC doubles! Secondly, the power required decreases with the reduced weight resulting in increased excess horsepower. Thus, halving the weight results in a more than doubled ROC.

Unfortunately, normally aspirated twin-engine airplanes are at a distinct disadvantage when considering single-engine climb performance since at 5000 feet DA, only about 86 percent of maximum power is available from the operating engine. As altitude increases, power available, along with the excess thrust producing a climb in the first place, decrease. Especially when considering non-turbocharged twin-engine airplanes, limiting weight must be considered as a primary option to ensure some minimum single-engine climb performance.

An often forgotten and potentially hazardous fact in multi-engine flying is that both indicated VY and VYSE normally decrease with DA, and certainly do so with the decreasing weight. Insisting on keeping the “blue line” to get the best performance under all conditions is deceptive. The blue line is appropriate only for the SL ISA conditions and at the MTOW. Unfortunately many AFMs or POHs are silent on this.

In the absence of the manufacturers data, we could design a chart for each light-twin airplane to meet the particular single-engine climb requirements. Such a chart is represented by Figure 4 on the preceding page.

Putting It All Together

To demonstrate how all this works, lets take an example involving a 285-hp Cessna 310. For this example, we need a 300 ft/nm gradient until reaching 1250 feet AGL, starting from sea level. The average winds throughout the climb to 1250 feet are estimated to produce 15-knot headwind. Since the DA changes in climb, we are linearly interpolating between SL and 2500 feet DA data.

First, well guess MATOW as 4900 lbs. At this weight, the DA-averaged VYSE is 100 KCAS/KIAS, or 102 KTAS, and DA-averaged ROCSE = ROCA = 430 fpm. We arrive at this value by using and interpolating data from Table 3 or directly from Figure 4. For the given 15 knots headwind, the GS is 87 knots and the average ROCR is 435 fpm, as calculated using the formula at left. From the diagram in Figure 4, we find the MATOW of 4880 lbs. (with fudge factor of only 5 fpm). Thats about 620 pounds below the airplanes MTOW.

The 310s empty weight is typically about 3600 lbs., or 1280 pounds less than our calculated MATOW. The pilot could still put in, for example, 80 gallons of fuel (480 lbs) plus 800 pounds of people and bags. In this example, the departure can be conducted safely even if one engine fails at the most critical moment.

If there was zero wind, the required MATOW would be 4610 lbs (extrapolated). This is still about 1000 lbs over the empty weight. A pilot can still put on 80 gallons of fuel and have 530 pounds useful load remaining. In addition, to meet the 300 ft/nm requirement, climb should continue at 97 KIAS, which 10 knots below the “blue” line of 107 KIAS for the 310.

One final note: When worried about SE performance during a missed approach at the destination, a twins landing weight can be adjusted so to give a SE service ceiling of, say, 2000-3000 feet above the appropriate DA or MDA. In that case there is an option to execute a missed approach safely on one engine.