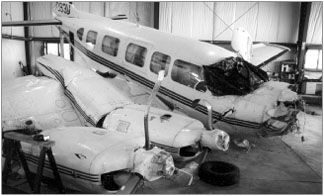 Listen in on just about any hangar-flying session and the FAAs rules and regulations will likely take a beating. Yet, for all our acrimony about them, the FARs really allow enormous freedoms for personal flight. In as little as 20 hours and the new Sport Pilot certificate, we can venture aloft in simple airplanes-to paraphrase instructor/author Bill Kershner, those that can just barely kill you-even carrying a passenger. Twenty more hours minimum experience gives us credentials for flying just about anything, just about anywhere; a simple instructor endorsement (with no minimum time requirement) says we can do so in a complex, high-performance and/or tailwheel airplane. We can pick up a multi-engine rating over a weekend, again with no minimum experience required so long as weve mastered at least rote repetition of tasks from the Practical Test Standards-the lowest level of learning. Add another 40 hours of instrument instruction-totaling a typical executives work-week-and the FARs let us fly any of these airplanes in weather of our choosing … whether the choice is good or bad.

At that point, flying becomes on-the-job training using the much-clichd license to learn issued by the FAA. Tickets in hand, you begin itching to rent these airplanes youre certificated to fly or, if youre ambitious and the economics allow, buying an airplane of your own. Thats when youll find personal aviations glass ceiling-insurance requirements. For all your certifications and ratings, when youre asking a third party to bet the value of your hull insurance or, more catastrophically, a million dollars or more in liability protection on your ownership and operation of an airplane, youll find that the FAAs minimum standards are not enough. So, what are the insurance companies looking for? To what warning flags do they pay attention? How can you minimize any risk imposed by your aviation activities-and save some money on insurance premiums?

The Perfect Risk
The answers are fairly simple, really. If aviation insurance companies ruled the world, wed all be military-trained, currently employed airline pilots in our 40s or 50s with no waivers on our medicals and no incidents or insurance claims (regardless of fault) on our records. Wed be flying 1975 or later Cessna 172s-maybe 182s-logging 100 to 150 hours per year to include at least one Flight Review and some logged IFR dual each year. The airplanes engine would not be near (and certainly not beyond) its recommended TBO and wed avoid flying from anything thats not a paved, public-use airport. Our airplanes would not be based in Florida or California, we would not instruct students nor allow anyone with less than at least 100 hours in-type to fly the airplane and we would never defer maintenance or accomplishment of non-mandatory factory service recommendations.

Insurance companies do not usually seem to care whether we hold a certificate higher than the Private, although they highly value the Instrument rating. They arent concerned if we fly into Canada, Mexico (although the Mexican government requires a Mexican add-on liability policy) or even overwater to the islands of the Caribbean. Our coverage is in effect even when we do things-like run out of fuel, attempt visual flight in instrument conditions or fly low-level aerobatics-that might result in legitimate charges of criminal negligence in non-aviation courts. But any deviation from the perfect risk (combination of airplane, pilot and flight operation) entails an increase in premiums and, in many cases, severe restrictions or even the complete unavailability of insurance coverage. Heres what theyre thinking.

The Airplane
Insurance companies want our airplanes to be common types, and relatively new. This is to keep the costs of repairs down; rare and older airplanes, especially out-of-production models, may be costlier to insure-if you can get an insurance quote at all. Try insuring a wood-wing Mooney M20A, a Piper Apache or a Bellanca Viking built before about 1972. Even some fairly common airplanes fall off the insurance map after an arbitrary age. Your agent will undoubtedly be able to find someone who will write a policy on your old or rare airplane from the pool of what are sometimes called specialty carriers. Just remember that, as in medicine, the word specialty often means at a significantly higher price.

And buying a new airplane incorporating revolutionary technology may not make things easier or cheaper. Cirrus highly successful SR-20 and -22 airplanes, for instance, are hard to cover without pilot dedication to a level of initial and recurrent training all out of proportion with other airplanes in the four-seat, fixed-gear market. The real fear among insurance underwriters is that they simply dont yet know what the claims record of composite airplanes is going to be. Hence, the insurance market is tighter in the new-technology airplanes, limiting risk by requiring a high level of pilot training like that offered by the Cirrus Owners and Pilots Association (www.cirruspilots.org).

According to Greg Sterling, Executive Vice President and General Manager of AOPA Insurance Agency (AOPAIA), Its all about the insured value of the airplane. Where in the past three aircraft mishaps would typically represent less than a $300,000 loss, todays $400,000 hull values mean losing three airplanes costs the insurance company $1.2 million, says Sterling. With many airplanes valued where turboprops were a few years ago, he adds, insurance companies turn to higher pilot experience and training requirements to try to remain profitable.

If you think offerings from Cirrus and Diamond push the envelope, consider the emerging very light jets (VLJs) from Eclipse, Adam Aircraft and others. The skills required to fly them with an equal level of safety are not nearly as common as the ability to plunk down a million dollars or so to buy one (consider that half of all hopefuls who come to military pilot training already holding a Private certificate or higher wash out in jet training). Eclipse has proposed an ambitious pilot training program for pilots without significant turbine experience, one which holds open the option of washing out prospective buyers.

Im very encouraged by the [VLJ manufacturers] dedication to pilot education and mentorship programs, AOPAIAs Sterling added. Yet given the performance, cost, and completely unknown track record of non-professional civil pilots in jet aircraft, the insurance industry will be very conservative in the first years after VLJs hit the market. Initial insurance costs will likely be very high; underwriters will wait until an equilibrium develops and a loss record established before considering adjusting rates downward. Weve got to try to keep the loss to no more than one (totaled airframe) in the first year, for the insurance industry to accept owner-flown VLJs, according to Sterling.

The Operation
Weve been discussing what is known as a personal/business use insurance policy-flight by part-time pilots not compensated directly for their flying time. Deviations from P&B use dramatically affect the availability and cost of insurance, with all forms of compensated use costing far more and generally requiring much more pilot experience.

Other factors may affect premiums as well. When I sold aircraft insurance a decade ago residents of California were charged extra for the same coverage available elsewhere-the justification being that historically over half of all aircraft break-ins and thefts-covered occurrences under aircraft hull protection-take place in that state. I cant confirm whether thats still the case. One underwriter I worked with, coming from an airline underwriting background with little GA experience, proposed a significant premium increase for airplanes operated over 150 hours per year. His thinking (logical in airline underwriting, where pilot experience and currency is a given) was that more time aloft means more chances of an accident. It took significant re-education for that underwriter to realize that the more a GA pilot flies, the more proficient he/she typically will be and the less likely he/she will have a mishap.

Why Its Like This
Many pilots balk at being told what they can do with their airplane by the insurance companies. But, look at it from their viewpoint.: When you take out an insurance policy youre asking the underwriters to bet the value of the airplane on your flying skills, local airport security against theft, and natural disasters like the one-two-three-four punch of Hurricanes Charley, Frances, Ivan and Jeanne. Insurance carriers look at the high rate of aviation accidents and claims and the cost of repairs should your airplane be damaged, and what little objective information is available about you to show youre worth the risk. Then they set rates to try to make a profit. No wonder insurance companies have such stringent requirements. Remember, of course, the FARs are minimum standards.

Do You Need Insurance?
Very few states have laws requiring aviation liability coverage. Many municipalities require owners of based airplanes to have some minimum liability coverage, a trend that started on the coasts about a decade ago and has gradually gained favor in the interior. If youve financed your airplane, the lienholder requires physical damage (hull) protection for the airframe as a means of guarding its investment in the event nature or you total the aircraft.

But if your airplane is paid for, your airport and training provider do not require insurance, you have no dependents and you do not live in one of the states requiring at least liability coverage, you can take the bet yourself and realize the savings of not paying the rule-the-world insurance companies. Just accept the expense stoically if you lose.

If Insurers Wrote The FARs
If the insurance companies wrote the FAAs regulations, wed have much more stringent training and currency requirements, similar to those in the opposite pages sidebar. For example, wed have to amass a large number of hours in a specific airplane configuration before being allowed to act as its pilot in command; wed have mandated type training for every make and model of airplane, no matter how simple or how similar to another type, and we wouldnt be able to fly an engine beyond TBO. And, for someone with a little piston multi-engine time wanting to step up to an Eclipse, they can probably get past the FAA, but it would almost take an act of Congress for them to get insurance, at least initially.

In terms of safety, then, the FARs arent that restrictive after all.