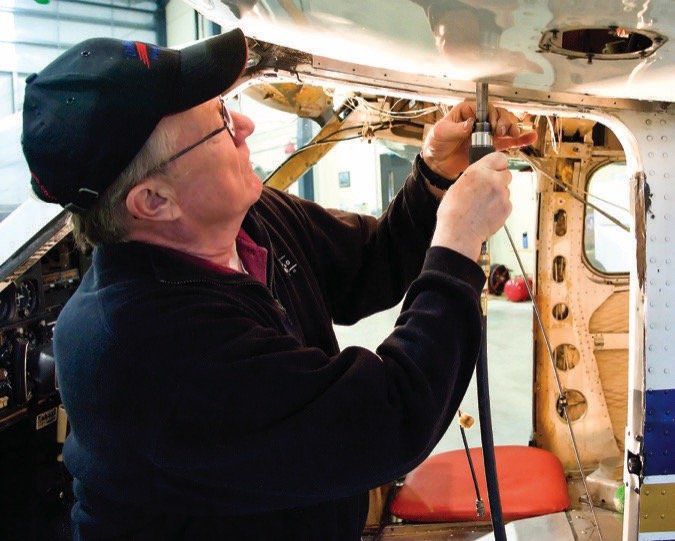 There’s an opinion among some pilots and mechanics that inspections and scheduled maintenance can do more harm than good. By constantly disassembling and reassembling an aircraft to inspect it, they argue, we’re prematurely wearing out the aircraft and actually making it less safe. Those same pilots and mechanics note that this is largely true, in their opinion, for aircraft that aren’t flown very much. For more active aircraft, however, they acknowledge that regular inspections and maintenance are less intrusive and, in fact, beneficial.

The “if it ain’t broke, don’t fix it” crowd advocating for less-frequent inspections of infrequently flown aircraft have a lot of experience and information on their side. One of the problems, however, is where to draw the line—50 hours a year? 100?—along with the presumption that what one set of eyes deems okay during an inspection also will be approved by the next set. Most everyone agrees, however, that any inspection or maintenance procedures carry with them their own set of challenges and possibilities to get something wrong, something that might result in an accident. No one is advocating abandoning scheduled inspections. But it often does seem counterintuitive to basically disassemble for an inspection a perfectly good airplane that flew, say, 50 hours last year because the calendar says so.

In my view, advocates for less-frequent inspections of infrequently flown aircraft also are acknowledging what I’ll call the human factor in aviation maintenance: That mechanics are human and make mistakes, and those mistakes wouldn’t happen if the inspection hadn’t been performed. Here’s an admittedly egregious example supporting such an argument.

On September 27, 2016, about 1830 Eastern time, a Cessna 172P Skyhawk was destroyed when it impacted terrain following a loss of control near Laytonsville, Md. The commercial pilot/mechanic was fatally injured. Visual conditions prevailed.

According to representatives at the flying club operating the airplane, the pilot/mechanic earlier flew it from the club’s base at a nearby airport to complete a 100-hour maintenance inspection. A review of airport security video revealed that the pilot taxied the airplane onto the maintenance ramp, shut down and uncowled the engine. He then drained the engine oil and inspected the spark plugs, air filter and other engine components before reinstalling the engine cowling. The pilot then pushed the airplane back, started the engine and taxied to the runway for takeoff. The video did not depict the pilot/mechanic servicing the engine with oil.

According to ATC recordings, shortly after takeoff the pilot reported that he was “losing an engine” and was returning to the airport. Several witnesses reported the airplane completed a 180-degree turn and flew back toward the departure airport. The airplane was then seen “flying erratically” before it stabilized momentarily and then “fell out of the sky sideways.” One witness stated he could see the top of the airplane’s wing during its entire descent to the ground. Review of airport security surveillance video revealed that about eight minutes after the airplane departed, it began emitting a smoke plume. At that point, the airplane was about a mile southeast of the airport.

The wreckage was examined at the accident site, and all major components were accounted for at the scene. The engine compartment, cockpit, cabin area, empennage and most of both wings were consumed by a postcrash fire. Flight control continuity was confirmed from the cockpit area to the flight control surfaces. The two-blade propeller remained attached to the engine. One blade was bent aft, partially melted, and displayed leading edge nicks. The outboard half of the other propeller blade was consumed by fire.

The engine was a focus for investigators. When the valve covers were removed, they contained no oil or oil residue. Only cylinders 1 and 2 could be removed from the case base studs. The No. 1 cylinder’s piston was internally damaged and its connecting rod exhibited restricted rotation about the crankshaft. The No. 2 cylinder connecting rod was found to move freely.

Investigators attempted to rotate the oil pump drive shaft by hand, with negative results. The steel gears were locked and would not rotate. The accessory housing side of the oil pump was discolored and exhibited signs consistent with a lack of lubrication. The outside of the crankcase at the No. 4 cylinder was fractured. The No. 3 cylinder was thermally damaged at the cylinder-head-to-steel-barrel interface. There was no residual oil inside the case.

The NTSB determined the probable cause(s) of this accident to include: “The pilot/mechanic’s failure to maintain airspeed following a loss of engine power, which resulted in the airplane exceeding its critical angle of attack and experiencing an aerodynamic stall. Also causal was the pilot/mechanic’s failure to service the engine with oil following maintenance, which resulted in the total loss of engine power.” It’s that simple—and vastly more complicated.

As Bob Wright notes this month in his article beginning on page 4, the NTSB’s probable cause findings often omit the “why” of an aviation accident. This is one of those instances. By all accounts, the accident pilot/mechanic was experienced in the cockpit and under the cowling. He, of all people, knew the engine oil had been drained and knew the airplane wouldn’t fly for long without it. Yet he took off without adding oil to the engine.

Was the pilot/mechanic distracted? In a hurry? Did he presume someone else added oil to the engine? Why didn’t he check the dipstick? We’ll never know, and until we do, accidents like this will continue happening.

The General Aviation Joint Steering Committee (GAJSC) and the NTSB determined that “a significant number of general aviation fatalities could be avoided if pilots were to conduct more thorough preflight inspections of aircraft that have just been returned to service” after maintenance or inspection. “In many cases, although the maintenance personnel made the initial mistake, the pilot could have prevented the accident by performing a thorough or advanced preflight check.”

In response, the GAJSC and the FAA recommend an “advanced checklist” for use after maintenance:

• Coordinate with your mechanic before flying aircraft that have recently been maintained to get a clear determination as to what has been accomplished.

• After maintenance, check all systems more thoroughly than the normal preflight checklist implies.

• Pay particular attention to aircraft components that may have been affected by recent maintenance.

• Avoid becoming distracted or being interrupted in the middle of the preflight to ensure you do not accidentally miss or skip a step.