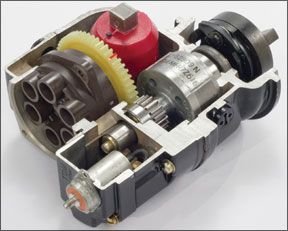 Why do reciprocating aircraft engines have independent dual ignition systems? At first glance, the answer seems obvious: for a safety backup. Most pilots will agree that if one system fails, the other will provide enough spark to keep the engine running. Keeping the combustion going is only one reason for the dual-magneto system. Since magnetos operate independently of the aircrafts electrical system, if

any, the engine also will keep running even if the electrical system fails. This is true, also, for newer-technology installations using electronics to control a piston engine. These newer systems whether based on a conventional gasoline or diesel configuration require a battery backup to keep the engine running in the event of an electrical failure.

Normal engine operation requires both of the ignition systems to function simultaneously and correctly. This is the norm for most piston engines we fly behind, or between. (Some engines are designed to use magnetos timed a few degrees apart.) Despite its pre-WWII roots, the magneto-based dual ignition system is good to have around. Its relatively simple, well-understood and easily maintained. If one system fails, the other is there to pick up the slack and get you to a runway. But better understanding of the system powering most personal airplanes these days can help enhance safety.

When the crankshaft rotates to a point several degrees before top dead center (TDC) the exact number of degrees varies from engine to engine ignition occurs. Two flame fronts are started by dual spark plugs igniting the fuel/air mixture. By the time the piston reaches TDC, the gas expansion has reached its maximum. The piston then is pushed downward, accelerating from no movement at TDC to its highest speed movement at the mid-point of travel. At bottom dead center (BDC), the piston decelerates to zero. As the crankshaft continues to rotate, the piston starts back upward in the cylinder for the next phase of the four-stroke cycle.

The pistons linear movement is converted to rotating energy at the crankshaft, which is connected to and turns the propeller. This is accomplished by the design of the rotating crankshaft and the pistons connecting rod. While this all appears complex, its easier than it may appear the first time.

With only a single flame front being produced when one ignition system is operating, the combustion process slows down and less energy is imparted to the piston. This is not what the typical aircraft piston engine needs, since theres rarely such a thing as having too much power.

In this scenario, the combustion event takes place more slowly and the piston cant absorb the energy imparted. Combustion happens so slowly, in fact, that the fuel/air mixture is still burning as it exits the cylinder and enters the exhaust system.

This is why exhaust gas temperatures (EGTs) rise when operating on a single magneto during the run-up mag check. The same thing happens to all cylinders when a magneto fails in flight or, in a single cylinder, when a spark plug fails.

In addition to ensuring each magneto is properly set to fire the spark plugs at the right point in the combustion cycle, each magneto must also be internally set to send its electrical energy through the ignition harness to the spark plug. Any time these settings are out of adjustment, as specified by the engine manufacturer, the engine will not be able to produce its full, rated power. Depending on which specification is not met, severe engine damage can occur.

WHAT SPARK PLUGS DO

Spark is needed to start combustion. As discussed, the electrical energy produced by the magnetos is delivered to the spark plugs to ignite the fuel/air mixture. Its essential that the spark plugs be in peak operating condition.

Different engines require different spark plugs. These are some of the variables determining which plug is correct for which engine:

To find the correct plug for each engine model, extensive flight testing is conducted by the engine and spark plug manufacturers. They use different power settings, in many different operating conditions, to develop the best plug. Once the data is collected and the new plugs produced, spark plug data charts are provided by both manufacturers. They make efforts to eliminate the possibility of error in the selection of the spark plugs.

The best solution to the problem of spark plug fouling is to first use the correct heat range plug. Next, avoid periods idling on the ground and in the air and lean properly.

Spark plug service life and engine performance are affected by the size of the electrode gap. Misfiring during idle is one sign of an incorrect gap setting. Misfiring may also occur during cruise power, when the mixture is leaned. The plugs will tend to foul when intermittent firing takes place, with the lowering of the plug insulator tip temperature.

There are two basic types of spark plugs: massive electrode and fine-wire. They function bascially the same; however fine-wire plugs which cost more usually last longer and are less prone to fouling.

Whenever a technician performs a 100-hour or annual inspection on a piston-engine airplane, the magnetos should get close attention. Among other things, the inspection should verify the magnetos are correctly timed and lubricated internally, and that magneto-to-engine timing is set per the manufacturers recommendations. Magneto preventive maintenance is covered in periodic inspections, replacement of critical parts and overhaul. Inspection intervals vary according to the magneto model, the serial number and engine on which theyre installed.

Airplanes that have been stored for long periods of time, or are seldom flown, may need their magneto coils and rotating magnets replaced, as well as new spark plugs.

Of course, the ignition harness needs a close look, too. In addition to checking for abnormal wear in the high-tension wires outer covering and proper security at the magneto and at the spark plugs, among other things, a bad harness can affect the engines power output, static idle rpm and the magnetos rpm drop during the pre-flight run-up. Just as with magnetos on an engine that is rarely flown, ignition harnesses can deteriorate over time.

Finally, engine overspeeds, water damage and sudden engine stoppages spell trouble for magnetos. These emergency cases require the magnetos to be overhauled, with careful attention given to all rotating parts, bearings and electrical components.

Among the various preventive maintenance tasks a pilot who owns an aircraft not used in commercial service can legally perform is cleaning and gapping spark plugs. Just as with any aircraft maintenance task, doing so requires access to the manufacturer-recommended tools and documentation. A friendly A&P to watch over things and demonstrate the correct way, for example, to tighten ignition harnesses to spark plugs doesnt hurt, either.

By doing some or all of the preventive maintenance on the airplane ignition system, an owner/pilot can get an excellent picture of the engines health. Here are some clues:

Deposits on the spark plug are normally a brownish gray color.

An internal temperature problem can be indicated by lead fouling of the plug.

Low temperatures and excessive richness of the fuel/air mixture at idle and taxi power are indicated by black carbon and lead deposits.

When piston rings fail to seat, or there is excessive wear, the plugs may be oil-fouled.

Cracked spark plug porcelain has usually been caused by pre-ignition. In any case, a cracked or otherwise-damaged spark plug should never be reinstalled.

Obtaining maximum power and longevity from your aircrafts piston engine depends on a well-maintained and properly functioning ignition system.