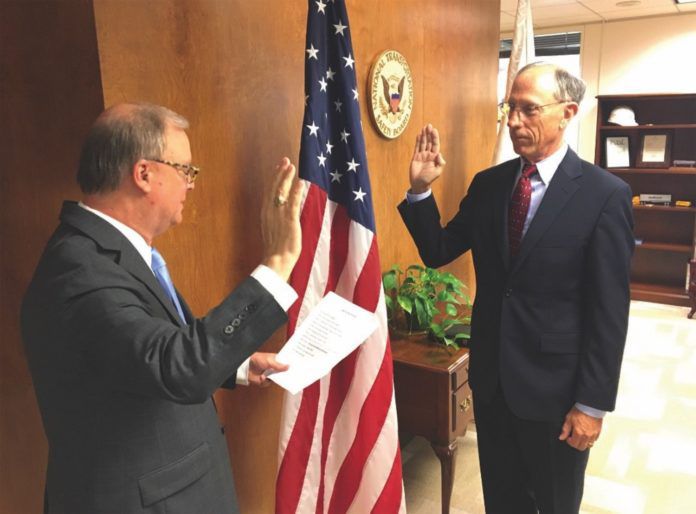 Former Aircraft Owners and Pilots Association Air Safety Institute President Bruce Landsberg in August was sworn in as the National Transportation Safety Board’s vice chairman. Landsberg has more than 6000 hours of flight time and holds FAA airline transport pilot and flight instructor certificates. He served in the U.S. Air Force and earned bachelor’s and master’s degrees from the University of Maryland.

In addition to his work at AOPA ASI, which began in 1992, Landsberg has held management positions at flight training provider FlightSafety International and airframe manufacturer Cessna Aircraft Company. Landsberg’s appointment as the NTSB vice-chairman is for a two-year term. Concurrently, his five-year term as an NTSB member also began. Also in August, Jennifer Homendy was sworn in as a new NTSB member, restoring the Board’s complement to five.

“Throughout my career, I have had a great appreciation for the work the NTSB does,” Landsberg said in conjunction with his swearing in ceremony. “It is an honor to join the NTSB in its pursuit of transportation safety in all modes of transportation.” NTSB Chairman Robert Sumwalt administered Landsberg’s oath, adding, “Vice Chairman Landsberg’s expertise and long-standing commitment to safety will be invaluable assets. We welcome him to the NTSB.”

“From the military to his long tenure at the AOPA Air Safety Institute, Bruce Landsberg has a long and respected career in aviation safety, years of experience that will serve him well at the NTSB,” said AOPA President Mark Baker. “We thank the White House for nominating him and the Senate for its confirmation vote. General aviation is safer than ever, and we look forward to working with him and the NTSB to keep improving and giving pilots the resources and training they need to fly safer.”

“Bruce Landsberg is one of the most knowledgeable and passionate safety proponents our industry has ever seen, and his expertise across several aspects of aviation safety will make him a valued addition to the NTSB,” said NBAA President and CEO Ed Bolen. “We look forward working with Bruce towards our mutual goal of making our industry safer.”

The immediate future of the FAA and industry’s program to develop and approve an unleaded aviation gasoline is in doubt after apparent failure of the Piston Aviation Fuels Initiative (PAFI). In June, the FAA said flight testing and some engine testing being conducted under the program had been halted. In late August, PAFI participant Swift Fuels announced that it had suspended its work under the program and “has transitioned to a high-octane unleaded avgas replacement,” which was not part of its participation in PAFI. Shell reportedly remains a PAFI participant, and is said to be working to optimize its candidate fuel.

The PAFI program, which began in earnest during 2013, had as its primary goal fleet-wide “authorization” of an unleaded fuel for conventional, spark-ignition piston aircraft engines. The current widely available aviation gasoline (avgas) is 100LL, a 100-octane fuel containing relatively low amounts of tetraethyl lead, which is toxic to humans. The U.S. Environmental Protection Agency has been sued as a way to force the federal government to determine that 100LL endangers public health.

The PAFI program is currently in its second broad phase. Phase I began in 2014 and consisted of a laboratory test program of several candidate fuels submitted by the industry. From that effort, fuels showing promise were selected for Phase II, which is an engine and aircraft testing program. That portion of the PAFI effort would be ongoing, except the FAA has halted it. According to the agency, “…the flight test program is approximately one-third complete, while the engine test program is about halfway complete.” The PAFI program originally was set to conclude in 2018 but has since been pushed back to December 2019.

Coming up with an unleaded replacement fuel for spark-ignition piston aircraft engines is fraught with challenges. Among them is a candidate formulation’s impact on both legacy and modern fuel systems. Those systems contain a wide range of rubber, plastic and metal components, any of which may be affected by the kinds of chemicals used to formulate gasoline. The fuel’s performance and physical characteristics also are of concern since any reduction in the fuel’s energy content or increase in its mass may have an operational impact on thousands of aircraft in the fleet. Finally, an unleaded aviation gasoline also must be capable of blending with the 100LL already present in aircraft fuel systems in any proportion without appreciable impact.

What comes next is anyone’s guess. Swift Fuels said it “is working privately with FAA and OEMs utilizing an alternative pathway for FAA certification status which is already in progress.” Engine and flight testing of Swift’s new unleaded fuel “has been on-going for the past months across the US—during a period when PAFI testing had been delayed,” the company said. Swift Fuels already markets a 94-octane unleaded avgas.

Swift’s “alternate pathway” likely is the FAA’s supplemental type certificate (STC) process, which General Aviation Modifications, Inc. (GAMI), chose over PAFI participation. It’s not clear how the STC process would work in this instance, including the appropriate fuel’s distribution and availability. It’s this latter point that makes PAFI’s apparent failure all the more significant, since it’s likely that anything other than fleetwide approval and availability of an unleaded avgas will disrupt a refining and distribution industry that for years has happily accepted the reality of only one piston aviation fuel.

According to the National Business Aviation Association (NBAA), there’s been a second episode involving a business jet’s fuel becoming contaminated with diesel exhaust fluid (DEF). In August, a Dassault Falcon 900EX returned to the Miami-Opa Locka Executive Airport (KOPF) after one of the jet’s three engines failed and a second one did not respond to its throttle, the association said. In November 2017, some 13 turbine-powered aircraft received contaminated fuel at the Eppley Air Field Airport in Omaha, Neb. (KOMA). That episode resulted in the FAA issuing Special Airworthiness Information Bulletin (SAIB) HQ-18-08, now revised as SAIB HQ-18-08R1.

The offending substance, DEF, is a urea-based chemical incompatible with typical turbine engine fuel systems. It’s been entering the general aviation jet fuel supply as a result of it being required in the diesel engines of airport fuel trucks. In at least one instance, DEF was placed into equipment used to add fuel system icing inhibitor, e.g., Prist, to jet fuel. “When mixed with jet fuel, DEF will react with certain jet fuel chemical components to form crystalline deposits in the fuel system,” the FAA said. The crystals can then migrate through the aircraft’s fuel system, potentially damaging filters and other components. There’s no easy fix when DEF-contaminated fuel is placed aboard an aircraft. Appropriate inspection and repair techniques for suspected DEF contamination are specific “for each specific aircraft model type and its level of exposure,” the FAA said.