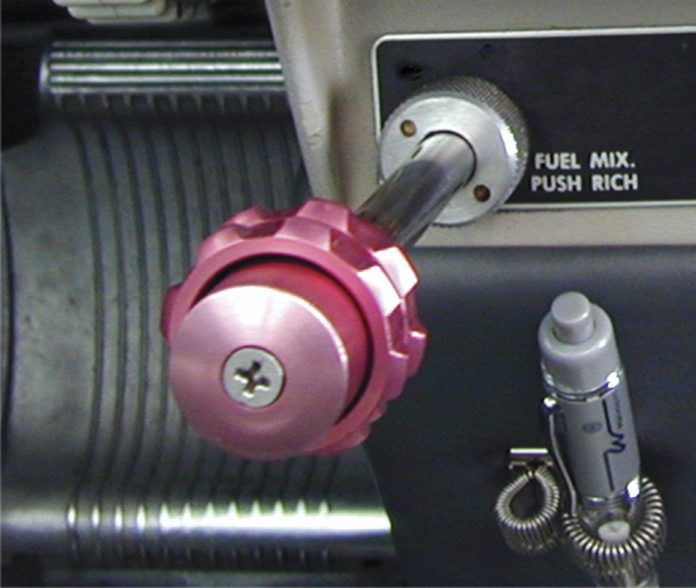 It’s basic human nature that we often want to improve the efficiency of the things we do. It’s also human nature to be skeptical when we’re offered something of value that carries little or no cost: Where’s the catch? What am I giving up to benefit from this largesse? These can be legitimate questions, and they deserve detailed answers, no matter what’s being offered. When considering how pilots use the mixture control to manage aircraft piston engines, desires to improve efficiency and healthy skepticism can intersect.

Leaning an aircraft’s piston engine fuel/air mixture is critical to obtain the performance and fuel economy—range and endurance—the “book” says the airplane will achieve. The documentation accompanying many popular aircraft/engine combinations often will specify the mixture setting required to achieve that performance. In fact, such settings can be difficult to implement without instrumentation often not available when the aircraft was manufactured. And they can be harmful.

For complicated reasons involving simplicity and economics, many pilots are taught to put their trainer’s mixture knob in the full-rich position and leave it there until the flight is concluded. At the end of the flight, they may touch it, pulling the knob to the idle cut-off position, the preferred way to shut down most aircraft piston engines. If students are taught how to lean, it’s generally because they’re flying from a high-altitude airport, where performance may suffer if they don’t use the mixture control. Leaning for economy or performance are skills they generally are forced to pick up from other pilots or instructors after earning their private certificate.

We’re not going to change that dynamic here, but we are going to discuss what many call an advanced skill: operating the engine lean of its peak exhaust gas temperature (EGT). Adjusting the mixture of air and fuel entering an internal combustion engine’s cylinders has long been seen as a way to achieve maximum efficiency and performance. It’s one reason automobile engineers years ago abandoned carburetors in favor of fuel injection, which allows them to much more precisely control the combustion event, and thereby economy and exhaust emissions.

The typical pilot introduced to mixture leaning is taught to pull back the mixture knob only so far, usually to a setting expressed in fuel flow or RPM, sometimes EGT. It turns out that EGT is a reliable and relatively inexpensive way to monitor the mixture control’s effects. As the pilot leans from a full-rich mixture, EGT rises as the amount of fuel entering a cylinder is reduced. At some point as we lean, the fuel/air ratio is reduced so that any additional leaning sees EGT values start to drop. This is how we find peak EGT.

Early use of EGT instruments monitoring all engine cylinders often showed uneven fuel/air distribution among them, reflected in varying EGT readings. Why don’t all the cylinders show the same EGT? In many engines, it’s because of variations in the amount of air entering the cylinder. A typical big-bore Continental engine, for example, would show each bank of cylinders on opposite sides of the crankcase to have roughly equal fuel/air ratios, but there were variations between the banks, from fore to aft.

With fuel/air imbalances of this type, it was too easy to set a mixture where one bank of cylinders was rich of peak EGT (ROP), one was at peak and one was lean of peak (LOP). Rather than futz with the airflow, engineers adjusted fuel metering at the cylinder level. This is known as “balancing” the injectors, a technique developed, STC’d and popularized by General Aviation Modifications, Inc., or GAMI. Suddenly, all cylinders’ EGT values rose and fell more or less in unison as the mixture control was manipulated. Happily, balancing the injectors also meant engines ran smoother and, since there was less variation among them, more precise leaning was possible, saving some fuel.

None of this was apparent in the cockpit, however, without modern multi-probe engine monitors, which can display EGT and other parameters as dynamic bar graphs. Using such a device, pilots could not only lean the engine with single-digit accuracy, but determine in real time when cylinders reached peak EGT.

Finding the mixture setting that produces the highest EGT allows us to position the control to operate the engine on either side of peak EGT. Typically, pilots are trained to back off the mixture control from peak EGT to perhaps 50 or 75 degrees F rich of peak EGT (ROP)when they set power. But what happens if we continue to lean the mixture, past peak EGT into the lean-of-peak (LOP) region? Doesn’t the engine immediately self-destruct? No.

As the graph above demonstrates, when the mixture is leaned past peak into LOP territory, HP starts to fall off (because there’s no free lunch). But by leaning to an LOP setting, the CHT and ICP curves fall off sharply, too. Meanwhile, the engine is running just fine, burning less fuel and with operating temperatures decidedly cooler than at almost any setting ROP.

It should not come as a surprise to learn that fuel consumption is reduced when running the engine LOP versus ROP. Yes, there is an sirspeed loss of a few knots, but the reduced fuel consumption allows us to fly farther on the same amount of fuel, even if it takes a little longer.

Another benefit is cooler-running engines. Heat is an enemy of reaching recommended time before overhaul (TBO) for almost any aircraft engine, and anything we can do to cool the engine is worth it. By setting a LOP mixture, we’re reducing CHT values, and cooler-running cylinders have greater longevity with fewer valve- or ring-related problems, and even reduced engine oil temperatures. Running LOP essentially uses excess air, which is free, instead of excess fuel, which isn’t free, to help cool the engine.

A third benefit is that an engine routinely operated LOP runs cleaner, leaving behind fewer combustion byproducts in the cylinder or in the exhaust than one running ROP. Running an aircraft’s gasoline-powered engine LOP isn’t “green” by any definition, but it is greener than ROP.

Fuel-injected engines perform best LOP, thanks to more even distribution of fuel and air among cylinders, but still may need a set of balanced injectors. The spread between the leanest and richest cylinders should be easy to get down to less than 0.5 gallons per hour.

Some carbureted engines can successfully run LOP, perhaps with a slight dose of carb heat to smooth things out. Generally, the greater an engine’s displacement, the easier it can be made to run LOP. Regardless, a multi-cylinder engine monitor is necessary to accurately determine where peak EGT is for all cylinders and manipulate the mixture control accordingly.

As the foregoing and, especially, the sidebar above explain, we don’t think the question is whether to operate LOP EGT. You should, when circumstances either allow or suggest it. You also should operate ROP when circumstances allow or suggest. The real question is how far LOP to operate the engine, or how far ROP. And that depends on the power setting and what you’re trying to optimize. 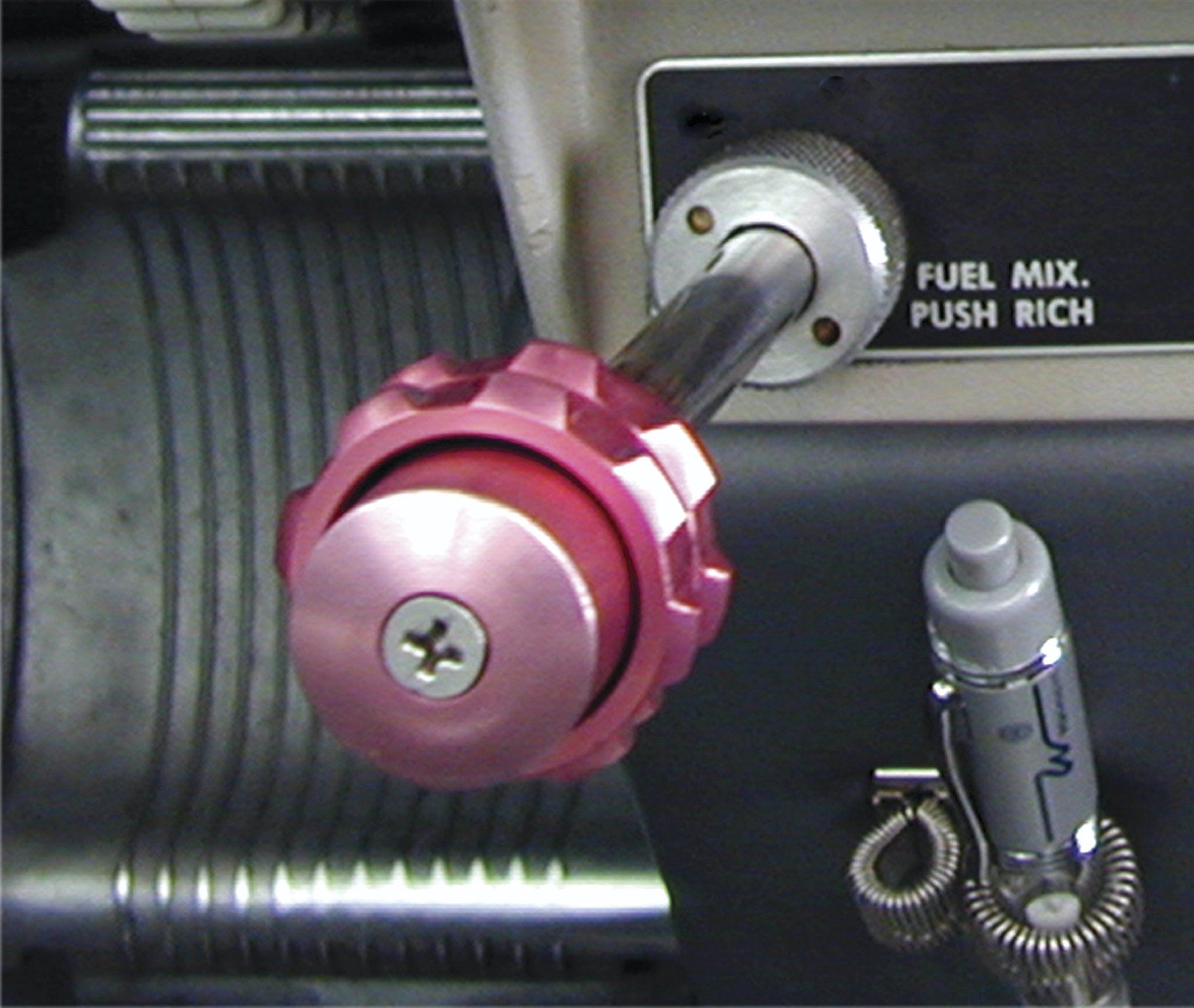 The basic tools we need to take full control of an engine’s fuel/air ratio are the mixture control (left) and a multi-cylinder engine monitor like the Insight G4 (right). 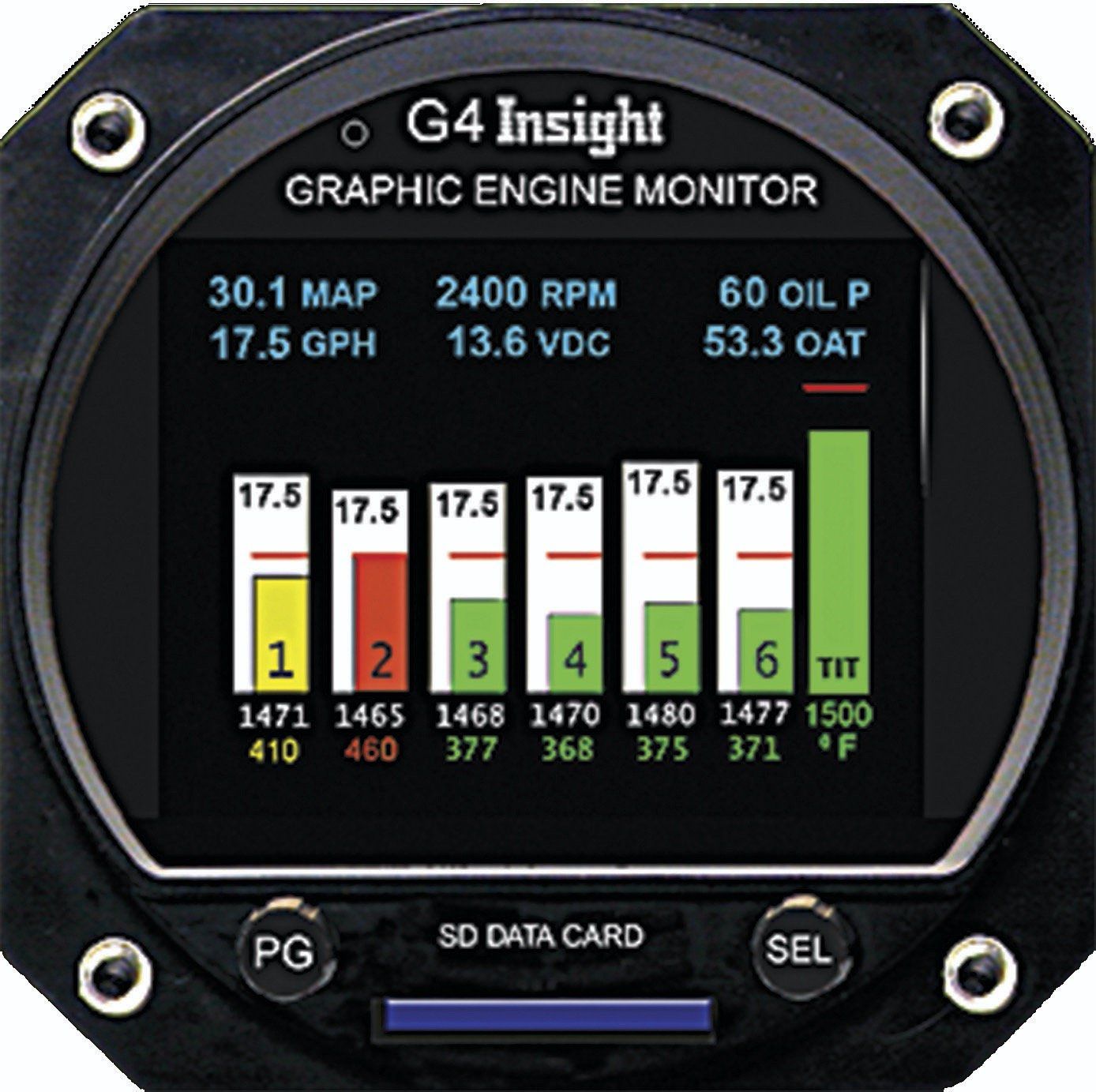 To better understand what happens to engine parameters when the mixture is leaned, the chart at the right may be helpful. It plots the relationships between EGT, cylinder head temperature (CHT), internal cylinder pressure (ICP) and horsepower (HP). So…what does happen?

Start at the left side of graph. As the mixture is leaned and we move to the right, all tracked parameters increase and peak, but at different points. For example, the most HP is available at around 100 degrees (F) rich of peak EGT (ROP). (For economy, many airframe manufacturers recommend running the engine in this range, usually 50-75 degrees ROP.)

But this setting also sees near-peak ICP and CHT, both which ideally should be lower. As the curves demonstrate, to keep those two parameters from being at or near their peaks, we have a choice: enrichen the mixture well ROP and waste fuel or lean it past peak into LOP territory. Yes, HP drops off since the engine is producing less power (burning less fuel) but a) not that much HP is lost, b) increasing manifold pressure can restore at least some HP and c) exchanging some HP for sharply reduced fuel flow, ICP and CHT values is a great deal.

Note that this chart does not plot changes in fuel flow, which is presumed to be linear as the mixture is leaned. 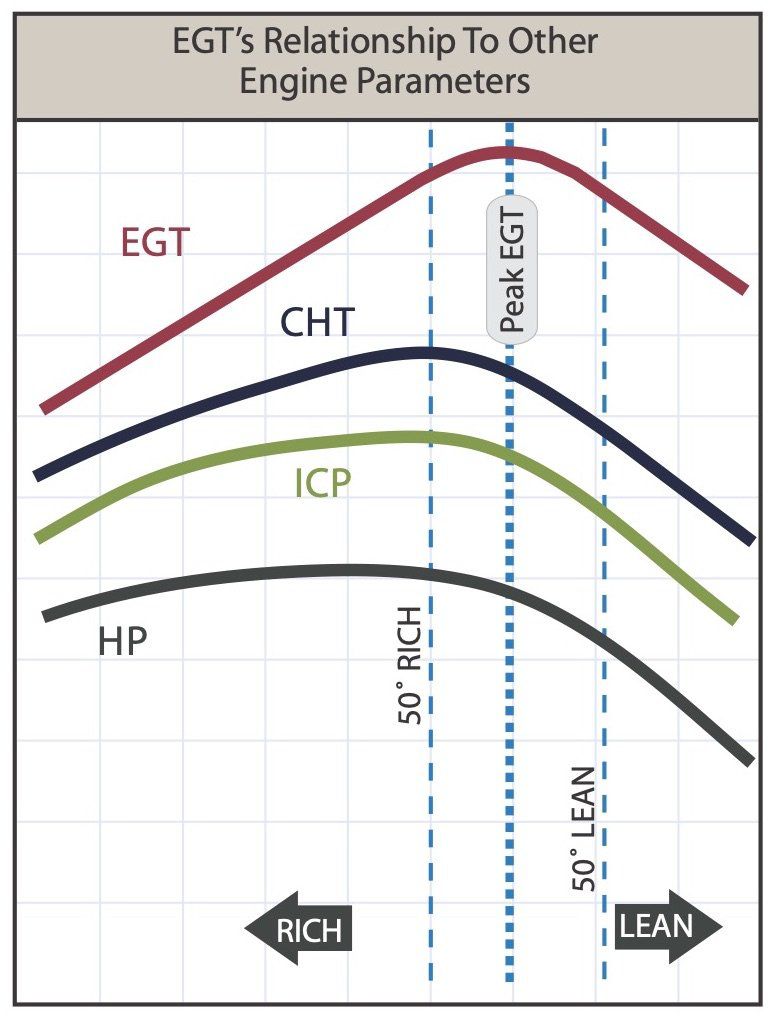 Whatever You Do, Stay Out Of The Red Box

The chart at right highlights what’s come to be known as the “red box” and plots how far ROP or LOP the mixture must be adjusted to prevent engine damage at various engine power settings (expressed as a percentage). Essentially, the more power being produced, the further either side of peak EGT we must adjust the mixture to help prevent engine damage and overheating.

Note that the LOP mixture range where damage can occur is far narrower than when ROP. Note also that power settings of 65 percent and less pose little to no risk of engine damage, no matter how the mixture control is positioned. Put another way, it really doesn’t matter whether you run your engine ROP or LOP, the question is how far ROP or LOP you run it.

At power settings greater than 65 percent, we want to be well rich of peak or well lean of peak. Engine manufacturers like Continental and Lycoming back this up in stating that at 65 percent power or less, the mixture can basically be placed anywhere you want it—including at peak EGT—and engine damage won’t occur.

A point to keep in mind is that normally aspirated engines—those without supercharging or turbocharging—cannot produce more than 65 percent power above 8000 or so feet MSL, depending on conditions. We’re aware of many pilots operating big-bore engines who routinely cruise at 9000 feet or higher and run at peak EGT, saving fuel while enjoying high true airspeeds. 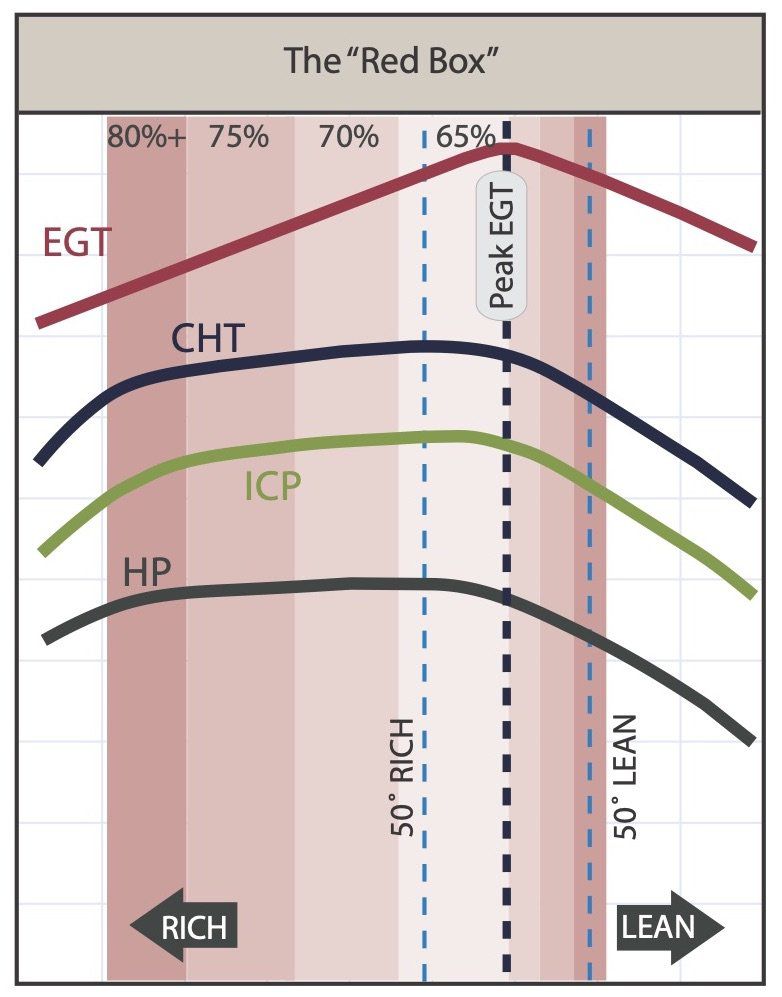