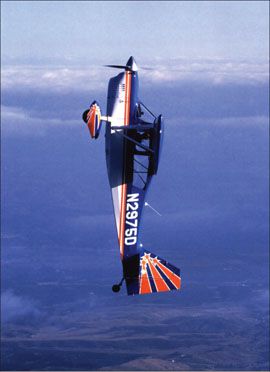 Although Private, Commercial, and aerobatic maneuvers may at first seem unrelated, they all are derived from the fundamental spin, roll and loop.During normal flight operations, however, pilots usually enlist bits and pieces of the roll and loop while avoiding the spin altogether. Banking to 45 degrees, for instance, represents one-eighth of a complete roll. The roundout for landing is a small arc from a loop. A level turn is a horizontal loop.

Other examples abound: The essence of the Chandelle combines looping and rolling elements into a 180-degree climbing turnaround. The aerobatic equivalent is the Immelmann. The difference between the two lies in their execution: The Chandelle involves looping while simultaneously rolling to maintain upright flight throughout. The Immelmann involves separating the looping and rolling elements-half a loop to inverted, then half a roll to upright. Aerobatic training allows us to explore and better understand the interplay of the fundamental maneuvers even during our everyday flying. It can be a lot of fun, too, but only if one approaches it from the correct perspective.

Seeing The Bigger Picture
The aerobatic environment is where the true and correct function of an airplanes controls becomes readily apparent. Ailerons, for example, are the primary means for controlling bank/roll; rudder is the primary yaw/sideslip control. It is imperative that pitch and power assume their rightful roles: Elevator primarily controls angle of attack, which we perceive as changes in airspeed, G-load and flight path.

Accordingly, the elevator serves as our primary turn/loop control. Power primarily controls altitude, or more precisely our altitude profile. In fact, whenever the operating environment demands an unambiguous assignment of pitch and power control functions, pitch invariably controls airspeed and power controls the altitude profile. This is indeed true not only during aerobatics, but also during glassy water landings in floatplanes, landing approaches onto aircraft carriers, sailplane operations and mountain flying into remote back-country strips. Each of these critical environments is intolerant of confusion over the proper use of pitch and power controls.

In the visual flight environment, most of our maneuvers are-or should be-primarily ground reference maneuvers. Pilots flying aerobatics especially must learn where to look to gather the most accurate visual information. For example, the loop requires sighting down the wing (usually the left one) from the initial pull-up until the airplane has nearly reached the inverted position. Looking beyond the wingtip to the horizon accurately reveals the airplanes progress as well as the straightness of the pull-up. Upon reaching the inverted position, the vision shifts over the nose for the remainder of the maneuver.

In addition to knowing where to look, aerobatic training develops the ability to sense roll, yaw and pitch in various attitudes, using various visual references. Relating roll, yaw, and pitch to the pilot rather than to the horizon most effectively accomplishes this. For example, aileron inputs cause the airplanes nose and wingtips to rotate from the pilots head to the pilots hip; rudder inputs are seen as an ear-to-ear movement of the nose and wingtips; and elevator inputs rotate the airplane head-to-feet. Interpreted this way, roll, yaw and pitch always look the same to the pilot. This is true whether the airplane is upright, inverted or vertical relative to the horizon, making it easier for the pilot to respond with the appropriate control actions needed to place the airplane into the desired attitude.

Students of aerobatics also begin to realize that the flight envelope has upright and inverted, positive and negative sides. Every upright maneuver can have an inverted counterpart. Every positive G and every positive angle of attack can have negative counterparts. Airplanes have positive and negative design limits; either side of the wing can generate lift; V-G diagrams depict both the positive- and negative-G operating envelopes. Of course, a particular airplanes ability to perform within the inverted part of its envelope depends on several factors, namely: the negative design limit, the approved maneuvers, airfoil shape, the control deflection and control authority available when inverted, and fuel and oil systems design.

All-Too-Familiar Dangers
Just as in the instrument environment, even small gaps in awareness and piloting skills can have dire consequences in the aerobatic environment.Deficiencies in stall/spin awareness and judgment are two areas in particular that become magnified under the aerobatic microscope. For instance, an NTSB analysis of 105 aerobatics-related accidents during the period 1972-1974 found that the stall/spin accident rate was nearly 50 percent-double the rate compared to general aviation as a whole during the same period.

The fatal stall/spin accident component for ATPs was equally revealing: During the aerobatic flight phase, 38 percent of fatal ATP accidents involved a stall/spin. This was three times greater than the fatal stall/spin rate for ATPs in the normal phase of flight. Once again, stall/spin proficiency in normal flying does not translate into stall/spin awareness during aerobatics.

The Next Step
Aerobatic training programs tend to be relatively short. Yet the influence of just a few hours of structured training, with a qualified instructor, in a suitable airplane are numerous: increased confidence, improved flying skills, enhanced situational awareness. Be sure the training includes an unusual attitude complement. Respect the limitations inherent in the design of each airplane you fly. And regardless of your level of experience, always be on guard against overconfidence. If you follow these and other common sense practices, your aerobatic experience will be safe and rewarding. This is critical if you intend to continue in aerobatics and will serve you well even during normal flight.

To learn more, or for a directory of aerobatic schools, visit the International Aerobatics Club: www.iac.org. No endorsement is made as to the quality of the programs available at any of these schools; this is merely a starting point for pursuing aerobatic training.

Also With This Article
“Any Airplane, Any Instructor?”
“When Maneuvers Go Wrong”
“Aerobatic Training Checklist”

-Rich Stowell has been named 2006 Western-Pacific Region Flight Instructor of the Year. In addition to being a NAFI Master Instructor of Aerobatics, Rich has performed more than 25,000 spins with students while logging more than 6100 hours of flight instruction.