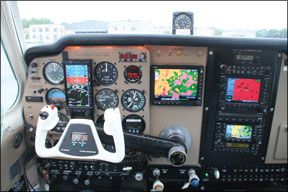 Weve been doing this long enough to remember when the extent of new avionics upgrades included a couple of flip-flop nav/coms and an audio panel. Even back then, some owners stumbled with otherwise simple switchology. Worse case was missing a radio call. Things have changed. Todays avionics upgrades, however, usually involve tightly integrated glass and advanced automation. Just learning how to power up all those

neat toys usually requires more thought and planning than the nav/coms of 20 years ago. The safety implications are obvious; the operational ones perhaps somewhat less.

It doesnt have to be this way as long as you have a game plan for training and set some limits for your flying until you master the basics. Checking your ego outside the cockpit and avoiding radical instrument panel layouts while setting new personal minimums is a must. Herewith are some tips to make transitioning to retrofit avionics safer.

Panels to live by

Whether the mission is VFR or IFR, many owners underestimate the importance of a logically laid-out instrument panel. While some older models of aircraft-and some newer ones, too-limit the configuration in which you can lay out avionics gear on the panel, a haphazard and non-standard layout can be a huge contributor to workload.

For instance, installing retrofit PFD equipment the likes of an Aspen or Garmins G500 result in the displacement of round steam gauge backup instruments. While you might not think youll ever use these backup instruments again, you probably will, either in recurrent training, for everyday crosschecks or as for-real Plan B primaries if the PFD gives you an Italian salute.

We remember one owner who thought he was being crafty when designing his new panel with a layout that had backup instruments scattered all about. Plus, there was an oddly engineered way of switching the navigation source and autopilot switching between pilot and copilot instrument panel. Turns out a PFD failure on the maiden flight test required him to fall back on the standby equipment. He fell apart during this unexpected time of high workload with an unfamiliar layout and a general misunderstanding of how things were switched and displayed (even though he designed the switching arrangement himself).

The moral of the story is to keep both primary equipment layout and backup systems-including switchology-as simple as possible.

Again, the panel and airframe might not accommodate the absolute best layout, but if you work closely with your installing shop you should be able to come up with something thats both efficient and safe in an emergency situation.

The other issue here is that many otherwise-talented avionics technicians might not be pilots. They might not understand the importance of having a particular toggle switch or instrument in a certain area of the panel. Be sure to ask the shop if they have an experienced pilot on staff who can assist in the brainstorming process of logically laying out a new panel-especially when it includes the fabrication of new metal. Good shops will keep the owner involved in the project.

The owner of a well-equipped vintage Bonanza put it perfectly after retrieving his airplane from a glass retrofit: “Even as an experienced ATP, Im kidding myself if I think I can jump into this upgraded airplane and immediately be as proficient as I was before the upgrade-its just a different airplane.”

The truth is that many avionics upgrades turn a familiar airplane into a different airplane. Its almost like flying a new and unfamiliar model. The sight picture is different, the layout is different and the button-pushing is certainly different than what you may be accustomed to. Throw in a barking controller machine-gunning instructions, a target-rich traffic environment demanding eyes outside the aircraft, complex engine management and handling new avionics during those first hours can be too tough to handle for some.

Your autopilot may work differently, too. For instance, Aspens EFD1000Pro retrofit PFD has integral GPSS steering. If the aircraft had an existing S-TEC 55X, for example, the GPS steering is no longer commanded from the S-TEC-its accomplished in the Aspen. One owner couldnt understand why the autopilot wasnt flying the approach properly when he used the autopilot as he did before the upgrade. The shop never explained the change in interface. Autopilot integration is extremely important to master-before you tackle high-workload approaches.

The owner of a small turboprop came clean and described his eye-opening pucker factor after a retrofit PFD was installed in his airplane. It was on initial climbout into a low overcast that he nearly lost control of the aircraft as he struggled to push the buttons on the display in his panel.

The whole experience taught him to not push unnecessary buttons until the aircraft is stabilized and under command of the autopilot. This is good advice. He also learned that launching into the clag with new equipment might not be a good idea for the first few hours, at least. Later, he concluded that the basic PFD required a solid 20 hours of combined VFR and IFR flying before he became really good with it-and questions still come up.

Choosing your missions carefully is key to going it with new gear, at least for the first handful of hours. Plus, consider that these first hours make you a test pilot. With a new installation also comes the potential for bugs-be it of the wiring or software variety. No matter how good your avionics shop, major teardown and rewire can create at least some problems that can be tricky to recognize in a busy cockpit.

Lastly, the avionics flight test should be conducted in VFR conditions only. Your airplane has been in pieces on the hangar floor for weeks and launching into weather is just too risky for this maiden flight.

Help from the avionics shop

Seeking avionics training from your installing avionics shop is a fine line. First, they arent in the training business. They have enough on their plate ensuring a quality and functional installation. Technicians may be pilots (you want to choose a shop with pilots on hand for obvious reasons) but may not be instructors, although when they venture on the initial flight test with some owners, its hard not to slip into that role. So whats appropriate for a shop teaching customers to use avionics?

Good shops will offer you the pilots guide and other valuable material to study while the aircraft is down for the installation. While hitting the books without having the equipment in front of you can be difficult, youll pick up on major points. And, keeping quick reference guides close at hand in the cockpit is imperative. Going through the pilots guide on a long trip while the autopilots flying is a great way to pass the time.

Before you even think about going flying, someone from the shop should sit with you in the aircraft and review the interface. Identifying associated and often critical circuit breakers, switches and controls is more important than you might think. Would you know how to pull power off of a runaway autopilot if it happened at low altitude?

The shop also should talk about how the equipment is interconnected. Not important is the technical lingo associated with complex wiring but an easy to understand synopsis of which boxes talk to which-and why, and how-is what good shops are made of.

Avionics training is becoming a lively topic for good reason. For some, its a real problem. We recall the sad story of an owner who invested upwards of 40-grand worth of avionics in his airplane so he could earn his instrument rating. As he progressed through the training, his instructor wouldnt allow him to fully utilize his autopilot-coupled GNS530W because the examiner was a “grey beard” who didnt like new and integrated avionics. Ultimately, this same examiner flunked him because he didnt know how to use the equipment. This is as shameful as the folks who end up in accident reports at the back of this magazine because they couldnt work their avionics.

Larry Anglisano is the avionics editor at sister publication Aviation Consumer. He works with an avionics shop in Hartford, Conn.