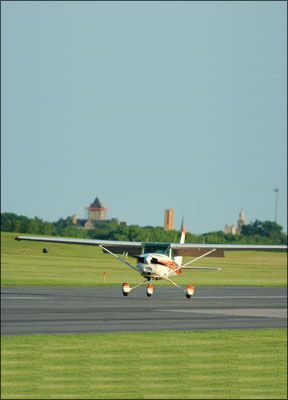 I once counted as many as 10 pitch pumps between a jet transport arriving at 50 feet above the runway and touchdown. As the power came to idle (a bit further down the runway than necessary), the copilot planked it down with a predictable, rather heavy kerplunk. All survived. And they could use the

airplane again. But theres got to be a better way.

Its the last couple hundred feet where many pilots lose the finesse, presuming they had any to begin with. Its the case whether operating VFR or IFR, since most operations this close to a runway are visual. For those using a terminal procedure to find the runway, the final approach fix should be a wake-up call from the en route doldrums, a call to action for a final approach that should simply be a smoothly executed, wired slide down the glideslope to a smooth touchdown. For the rest of us, sighting the airport or passing through 2000 feet agl is a good place to start shifting into “landing” mode from whatever line of thinking got us here. Happily, there is a better way: Understanding the aerodynamics of a slowing, flaring airplane is key.

I once watched another pilot make 33 power changes between the outer marker and the middle marker, on a relatively calm day. Three would have sufficed. The flight attendants had white knuckles. The airspeed, localizer and glidepath were, however, nailed.

These two guys were not amateurs. Somehow in their vast experience they had missed the knuckle-rapping due from their mentors. Violent meteorological conditions notwithstanding, the only requirement for most airplanes you and I are likely to be flying from, say, a three-mile final to touchdown is to smoothly reduce power and increase the pitch slightly, progressively, as the airplane settles to the runway. I liken it to squeezing the controls.

Wolfgang Langwiesche had some good ideas in Stick and Rudder, regarding pitch control for airspeed and power for altitude, but those basics need to be modified a bit on final. For example, I have yet to see any proficient pilot attempt to control glidepath with power and airspeed with pitch on an ILS alone. Pitch and power must be used together in a coordinated, integrated effort to wire the slope and nail the VREF.

One of an airplanes basic characteristics is the angle of attack at which its wings-with or without flaps or slats-are most stable. The airplane flies on its angle of attack, as adjusted by the pitch control (yoke or stick). Any time the yoke is moved fore or aft, that angle is told to change. Whether the plane weighs 500 or 500,000 pounds, the weight is carried by the wings. Finding and establishing that landing-configuration angle of attack is key.

Most of us do so by flying a recommended speed, in a given configuration (flaps and gear extended, for example) and allow the airplane to descend to the runway. We control the rate and angle of descent with coordinated power and pitch applications-the fewer the better.

As the airplane descends from initial flare altitude, a smooth squeeze back on the yoke as the airplane settles should meter the necessary increase in angle of attack as the airspeed decreases those last few knots and slows, descending to touchdown. A slight overcontrol or minor gust is easily and smoothly controlled by holding the attitude you have until it again starts to settle, then continue the gentle ratchet-back squeeze.

At this point in the flare, there is no salvation for he moves the yoke forward. All is lost. To do so is more of an emergency procedure than acceptable landing technique.

In most tricycle-gear airplanes, any forward movement of the yoke reduces the angle of attack. Airspeed likely isnt decaying and the landing becomes a ballistic event. There will be no touchdown finesse because the original reference angle of attack cannot be recovered. The airplane gets “pumped and dumped” onto the runway. If youre lucky, only pride will be damaged. Other outcomes can (and have) been much worse.

None of this stuff is new. In my opinion, it has been lost-rather, misplaced in aviation history historys warehouse-as a result of the nosegear. Any person who learned to fly in a taildragger knows all about it. Any pilot who did not learn to fly in a taildragger may have a difficult time getting it figured out later. Old habits are hard to break.

Another caveat from taildragger school is “fly it til its parked.” A Pitts flying club with which I was familiar had a mix of civilian- and military-trained general aviation and airline pilots. In my view, the Pitts is the easiest airplane in the world to fly-it does exactly what you tell it to do, even when you tell it to do something almost impossible. It is very important, however, to tell it the right things because its going to do what you tell it, and very quickly-like a black Labrador after a tennis ball. Every pilot in that club who had not received their primary training in a taildragger eventually ground-looped the Pitts.

Close To The Ground

Maybe part of the problem is a pilot becoming “spooked” as the runway rushes up to greet the arriving airplane. If so, much of that can be overcome by concentration. Meanwhile, encountering ground effects aerodynamic changes can be adding to dysfunction in the flare.

When a wing is one-tenth of a wingspan above the runway, drag is reduced by 50 percent. By definition, this drag reduction occurs in the last few feet just before touchdown. Carry a little excess power or speed into the flare-especially in an aerodynamically “clean” airframe-and youll likely get to know every inch of the runway. For example, the signature accident in a Mooney is going off the far end of the runway. Any extra speed approaching flare greatly amplifies the error.

The larger and more sophisticated the airplane, the greater may be its reaction to encountering ground effect. Some are pussycats. With some others, especially those arriving close to the runway at a relatively high angle of attack, the aft part of the fuselage may enter ground effect earlier than the front of the airplane. The result is a slight, uncommanded nose-down pitching moment. The F-4 Phantom II had a noticeable such moment immediately before touchdown; fortunately, it was easily countered with a slight pitch increase.

The conscious awareness of this behavior would disappear with familiarity and experience. The average jet transport will often demonstrate a slight nose dip as the plane gets close to touchdown, easily corrected if the pilot flying anticipates and holds his pitch firmly, but more likely resulting in a mild thump as the supporting angle of attack is dumped in the last second of flight. The same is true for lighter airplanes, too.

As power is reduced in the flare, another facet of airplane design rears its ugly head: thrust lines, or the destabilizing effect of power changes on pitch control. An excellent example involves certain amphibian singles with engines mounted on a pylon above the fuselage (Lake and Seabee designs come to mind). Rather than pitching down when power is reduced, they tend to pitch up. That can be good; that can be bad. The ultimate outcome is determined by how well the pilot is prepared for the pitch change.

A slightly different phenomenon, and constant source of entertainment, is to watch a former L-1011 pilot make his first landings in a DC-10. The DC-10s center, tail-mounted engine has a much higher thrust angle than the L-1011, even though they both have three engines and were designed with basically the same goals in mind. Meanwhile, as soon as the DC-10 is on the runway and reverse thrust is initiated, the nosegear comes up off the runway again! After a few landings, this no longer happens and conscious awareness it ever was a phenomenon disappears.

Thankfully, most of us are flying airplanes where a power reduction reliably and predictable produces a nose-down pitching moment. In the flare, one of the last things we want-in addition to a gear warning horn, crying baby, wake turbulence encounter or looming tree line-is an uncommanded down-pitching moment. Given these characteristics, however, were stuck with it and must compensate. The preferred technique should be a smoothly applied power reduction accompanied by a simultaneous and equally smooth increase in back pressure. If were doing it right, the airplanes slightly nose-high-after all, we are in the flare-angle of attack is at least maintained. Better in some airplanes that it slightly increases.

What usually happens is the pilot ends up pumping pitch and throttle in an attempt to make a “smoothie.” Doing so never improves the touchdown, and the airplane always lands well beyond the prescribed landing area.

Many airline manuals and much general aviation guidance dictate power off only at touchdown. As with so many other facets of aviating and, especially, landing, it depends. A light airplane, for example, may readily handle a power-off touchdown; a 727 wont. Somewhere between these two extremes exists a happy middle ground where sufficient, minimal power is carried into the flare, with a final power reduction made as the mains touch. A simultaneous increase in back pressure/pitch is desirable here to keep the nosewheel off the runway as long as possible and help smooth out the arrival.

In all situations close to the runway, smoothness counts a great deal, and the best technique for the airplane, runway and conditions is one arrived at after practice and experience.

There is no advantage to expressing anxiety issues by overworking the flight controls during landing. It makes passengers and the airplane nervous. Above all, smoothness counts in the last few feet before the wheels touch. Knowing how the airplane will respond to pitch changes, to encountering ground effect and to power reductions makes it all so much easier. Above all, and presuming runway characteristics allow an unhurried arrival, dont pump and dump.