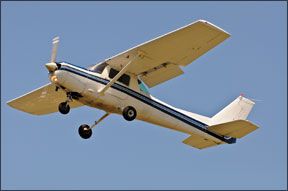 Pilots like to talk about speed and how fast they fly, often to the exclusion of other aircraft characteristics; its fun to go fast, no doubt. Witness how many aviators seek out the fastest flivver their finances can support. But the ability to power up to cruise, trim for speed, engage the autopilot and start fiddling with an iPod requires far less skill and hand-flying ability than working at the lower end of

the airspeed dial. And we dont learn much at the top of the green.

Demonstrating slow-flying skills takes up part of our training time; slow flying is an item in the FAAs Practical Test Standards for sport pilot certificates on up. The ability to manage and maneuver an airplane in the lowest range of its envelope, an arc usually all bright white just above stall speed but below VX-your best-angle climb speed-isnt something we practice much after the certificate is earned, but it should be. Slow-flight competency and comfort comes in handy in a number of circumstances-some of them rather common-and can save lives, yours included.

The Bad And the Ugly

Crash dynamics, according to the study, account for the disproportionate fatality rate of stall/spin crashes. If, as the study notes, an aircraft hits the ground in somewhere near a normal landing attitude, impact forces are dissipated over a longer distance and period of time than when the airplane hits at the nose-low attitude more typical of an unrecovered stall or even a partially developed spin.

Of course, maneuvering flight tops all flight phases in fatal stall/spin accidents at 41 percent, with takeoff next (28 percent), followed by approach (18 percent) and going around next (six percent). All other flight phases put together-climb, cruise, descent-barely account for barely five percent in the ASF study. Even crop dusting came in at less than less than one percent.

Maneuvering flight encompasses a wide variety of operations, including what we often think of as impromptu aerobatics, but also entails more mundane operations like pipeline patrols, banner towing and more. The bottom line is we can get low and slow-sometimes without knowing it-in our everyday flying. And then there are those pesky landings and takeoffs, when were deliberately just above the ground at low speeds.

The takeaway is this: When we get closer to the ground, the odds of hitting it increase in the event of a major error. When we fly slower, a major error is more likely. The best weapon to combat the inadvertent entry into a stall-and if you dont stall you cant spin-are practiced, competent slow-flying skills.

Of course, those skills are fundamental to our training, in the realm of real-world, go-somewhere flying-whether VFR or IFR-they too often deteriorate because we spend as little time as possible flying in the airspeed indicators white arc. An informal poll of active flight instructors-more than half of them employed full-time-yielded several observations about the state of most pilots during flight review and upgrade check rides. It shouldnt surprise, but most pilots slow-flight skills, absent recent practice, generally drew barely-passable assessments.

Nothing prevents pilots from picking a good area, a safe altitude and practicing, they all stressed. Its not like needing a qualified safety pilot for instrument practice-but bringing along another pilot, especially a more-experienced one-is never a bad idea when focused on training, one pointedly told us.

The FAAs Airplane Flying Handbook (FAA-H-8083-3A) addresses slow flight as two distinct elements: “(1) the establishment, maintenance of and maneuvering of the airplane at airspeeds and in configurations appropriate to takeoffs, climbs, descents, landing approaches and go-arounds, and, (2) maneuvering at the slowest airspeed at which the airplane is capable of maintaining controlled flight without indications of a stall-usually three to five knots above stalling speed.”

Lets first look at that second element, maneuvering at minimum controllable airspeed, VMCA. In this case, that would be the speed at which any power reduction, load-factor increase or pitch change moves the results into a stall.

To achieve this attitude, lets start with the airplane already slowed to pattern airspeed. Clear the airspace around you and start decelerating, with a target of losing one knot per second. We do this by slowly reducing power while simultaneously increasing back pressure on the pitch control, raising the nose in a coordinated, slow exchange of energy. Of course, well do this without deviating from the chosen altitude; although the PTS gives us a deviation range of no more than 100 feet, plus or minus, we suggest getting it under 50.

If in a retractable, lower the gear when you drop below the maximum airspeed allowed for operation; ditto for the flaps. In both instances, youll usually need to adjust pitch and/or retrim to maintain altitude while continuing to decelerate. As all these drag-producing devices are extended and as the airplane slows further, additional power will be needed to maintain altitude. This can be a busy time, even in a simple airplane; if things arent going the way you want, retract a notch of flaps, add some additional power-or both-and stabilize things. Then slowly start again.

Depending on the airplane, youll get a stall warning a few knots above the bottom of the white arc. The warning could be a conventional horn, a panel-mounted light, buffeting as airflow over the wing separates or some combination. Just as the pending stall indication becomes steady, you should add the power needed to maintain altitude and attitude-and you will be somewhat nose high. This is the attitude/configuration well be using for our slow-flight demonstration.

One thing to keep in mind: As you slow down, the airplanes control response will deteriorate until the controls respond only slowly, maybe also feeling mushy. Youll need more control surface displacement to roll, yaw or to effect much pitch change. On a gusty, bumpy day, you may find yourself bouncing closer to or farther away from a stall. Use good judgment on whether conditions dictate you postpone this exercise. Now trim the airplane for this power setting, configuration and attitude. Time to practice some maneuvering.

Remember all those ground-reference maneuvers you practiced as a primary student? Nows a good time to use what you learned while down at the low end of the airspeed dial.

One example might include S-turns: Find a long, straight road or other feature (youll need a long one because youll be challenged to see the reference at the airplanes nose-high attitude). Gently and slowly fly the airplane through the maneuver. The time needed to complete it isnt important; accuracy, maintaining altitude and learning how the airplane feels just above the stall and in a 15-degree banked turn are.

Another example is flying a rectangular course, like a traffic pattern. Turns around a point is good practice, also. Keeping that point centered in your side window likely takes more yaw and less aileron when flying at minimum controllable speed; this is a great way to practice a circle-to-land approach. Dont forget your eights: Eights on pylons or along a road also will teach you a lot about what happens at the white arcs lowest reaches. Again, though: Do these gently and with plenty of altitude, just in case.

The FAA also wants us to fly at VMCA through airport arrival and departure transitions. So, we also need to know how to handle changing altitude. Conveniently, this is rather easy when already trimmed: Add power, you climb; reduce power just a bit, you descend. All of this should happen at the same airspeed.

Next, throw a turn into the mix. Power for a climbing turn will need to be a little higher than for a straight-ahead climb at the same speed; and watch your roll-too much and it can get exciting. For the descending turn, reducing power but with care to manage pitch properly so the descending turn doesnt let the airplane speed up or, worse, stall. Throughout all of this, pay attention to what else the airplane is telling you: Monitor engine temperatures, for example. If so equipped, open cowl flaps, for example, but be aware they, too, will increase drag, just like the ones on the wing.

Recovering to normal cruise flight should be a simple affair: Youll need more power, more airspeed or both. Depending on the airplane and conditions, you may have used close to full power to perform the kind of bottom-of-the-white-arc, stall-horn-blaring slow flight were describing.

If thats you, recovering to normal cruise speed may force you to push the nose down and lose altitude before the stall indications disappear and the airspeed needle starts climbing back to something more comfortable. Otherwise, simply adding some power and using the pitch control to maintain altitude should result in enough acceleration to allow cleaning up the airplane and resuming normal cruise flight.

Regardless, retracting wing flaps before entering the green arc is a sure way to stall the airplane-dont change the airplanes configuration until youre sure you know what youre doing. Youll find a lot of performance quickly by retracting the gear before raising the flaps. The drag elimination will help you recover back to cruise flight but-and just as when setting up for slow flight-recovering from it can be a busy time. Feel free to slow things down and take your time.

Once the airplane is cleaned up and youre back to a normal cruise airspeed, scan both the airspace (for traffic) and the engine gauges (to ensure adequate cooling). Congrats: Youre done.

The ability to reliably, safely and predictably perform these kinds of slow-flight exercises is one way to exhibit-and confirm-your mastery of the airplane and the skills necessary to fly it well. Use the Practical Test Standards metrics in the sidebar above to measure how well youre doing and what things might need to work next time.