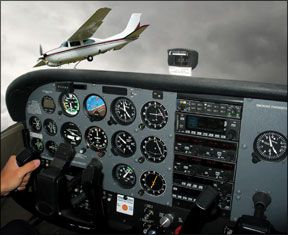 One of the fallacies of flying IFR in marginal-to-good weather is that its safe to presume everyone else out there is on the same page, under the watchful eye of ATC. Instead, its completely legal for someone else to be scud-running in barely VFR weather while youve gone to the trouble to get the rating, file the flight plan and follow the clearance.

Too-close encounters can often be the result, especially toward the end of an instrument approach but also while droning along in the en route environment. In all cases after a mid-air collision, you might be in the right, but your airplane will be just as damaged. Or worse. While we all know this intellectually, it took a real-world close encounter during an otherwise-textbook approach to hammer home for me the point of ensuring collision avoidance while flying IFR in marginal VFR weather.

It was a dark and stormy night. Well, not exactly. It was actually a rather lovely August evening as we descended from the initial approach fix on the GPS Runway 35 approach into York, Penn. (KTHV). Conditions were marginal VFR, with calm winds and three miles of visibility in typical soupy Mid-Atlantic haze. No clouds or fog, just lots of moisture between us and the horizon. The setting sun to our left created an eerie, otherworldly look to the landscape that was as creepy as it was breathtakingly beautiful. The ground was blanketed in a thick reddish mist, making it difficult to tell where the nebulous mounds of air ended and the rolling terrain began.

I was very glad to be flying on instruments: With no threatening ice, low ceilings or thunderstorms, the weather was a perfect IMC playground for me and my instrument student. The weather was not quite as good for VFR flying, but it was legal. Which should have caught my attention right from the start.

The GPS Runway 35 approach at KTHV begins at either the Westminster Vortac (EMI) or at the Xoppa intersection, 18.4 miles northeast of EMI. We joined at EMI, over which virtually every IFR departure from our home airport in Gaithersburg, Md., is routed. Somewhere between EMI and Xoppa, the Potomac Tracon cleared us for the approach. After crossing Xoppa, we descended to 2000 feet on a heading of 346 degrees toward Yorki, the final approach fix.

Id been monitoring the common traffic advisory frequency (CTAF) since Xoppa, which is 10 miles from the airport, and it had been quiet the entire time. I do this routinely in an effort to troll for traffic up ahead, even at a towered airport. Since we were on an IFR flight plan, the controller didnt alert me to any traffic near KTHV and I didnt hear any other aircraft on the advisory frequency, I thought we were in the clear. But as we crossed YORKI and started down to the minimum descent altitude, I realized we were not alone out there in the murk.

“York traffic, Piper 54321 is five miles to the west at 2000, landing York,” a voice chimed in over the CTAF. Where did he come from? Why didnt the controller tell me about this guy? My student continued motoring along the final approach course while I urgently scanned for the Piper. Squinting into the setting sun, I couldnt see a thing.

“York traffic, Cardinal 12345 is five miles to the southeast descending out of 1500 feet on the GPS 35 approach,” I replied. “No contact with the Piper.”

The pilot never responded and I never saw the aircraft. At the visual descent point 1.6 miles from the threshold with the runway in sight, my student applied full throttle and up we went. Without the benefit of radar service from ATC or an onboard traffic information system, there was little I could do to avoid the Piper except swivel my head and hope that he was long gone.

How Low Can You Go?

This hair-raising non-event made me think long and hard about what it really means when a controller says, “radar service terminated” while Im flying down low on an instrument approach to an uncontrolled airport. According to the Pilot-Controller Glossary, controllers use this phrase “to inform a pilot that he/she will no longer be provided any of the services that could be received while in radar contact.” In other words, youre on your own.

When visibility is reduced, even the most diligent see-and-avoid tactics by the sharpest set of eyes may not be enough to stay safe. I wanted to know whether radar service might still be available, even after a controller says its been terminated. I contacted Scott Proudfoot, a safety representative of the National Air Traffic Controllers Association (NATCA), because I wanted to know what else I could do to mitigate the risk of running into a VFR aircraft while conducting instrument approaches to uncontrolled airports in marginal VFR weather conditions.

One of the first things I discovered has to do with the areas complicated geography, plus a radar systems geometry. Depending on where you are relative to ATCs radar antenna, the controller working your flight may or may not be able to see aircraft in the pattern at your destination airport. Radar coverage is line-of-sight, so the floor of coverage rises as you travel farther away from the antenna.

Proudfoot said that in my situation, the Potomac Tracon controller handling our flight into York would have been looking at data from the Baltimore radar antenna located more than 50 miles away and with coverage beginning at around 3500 feet above KTHV. A Harrisburg Approach controller, getting feed from an antenna located only about 20 miles away from KTHV, might have been able to see the Piper on radar but there is no way to know for sure.

I called the Harrisburg Tracon to ask about this. A controller there told me he can see aircraft at 1000 feet above KTHV, sometimes much lower if he happens to catch a departure on his scope. However, he said that if he were handling an IFR arrival into York he might not call out known VFR traffic in the vicinity of the airport if the IFR aircraft was far enough away not to present a conflict.

Proudfoot said that controllers are not trained to know how low radar coverage exists in any given area, they just develop a sense of their territorys depth based on the altitudes at which they typically see aircraft appear onto, or disappear from, the scope. Ask two controllers how low their coverage is over the same airport and youll probably get two answers, based mostly on anecdotal evidence.

But, even that is better than not knowing at all. Knowing what I do now about the limitations of Potomacs radar coverage over KTHV, I might think twice next time about attempting this approach in similarly marginal VFR conditions. It would almost be better for it to be low IMC, with little risk of encountering a VFR aircraft in the soup, than to play Russian Roulette with scud runners. Or, I might ask Potomac for a handoff to Harrisburg which would handle the miss, anyway prior to Yorki to ask about any known traffic.

“I think pilots are trying to ask for services, but they are doing it in the wrong way,” Proudfoot said. While working at the Potomac Tracon, for example, hes observed experienced business jet crews waiting until theyre on short final to an uncontrolled airport to cancel IFR, because they incorrectly assume that by not canceling earlier, theyre avoiding conflicts with other VFR traffic at the airport. “The only thing youre doing by not canceling IFR is holding other IFR arrivals in the air.”

Technology exists that could eliminate some of this guesswork and potentially allow neighboring ATC facilities, such as Potomac and Harrisburg, to overlay their coverages in order to see aircraft at much lower altitudes from farther away. Mosaic, or multi-sensor radar, combines radar input from up to 16 sites into a single picture on a controllers scope. Most ARTCC facilities use mosaic radar, but it has yet to be implemented at the approach or terminal level, where separation requirements are tighter.

Jim McAllister, a controller and NATCA representative at the Potomac Tracon, was on the team that worked to develop mosaic radar for terminal use back in 2001. “We discovered that the mosaic functionality was pretty much written into the code that Lockheed Martin was building into the ARTS [Automated Radar Terminal System] program,” he said. So, the FAA commissioned a study to gauge the safety margins provided by mosaic radar versus ASR-9 radar in the terminal environment. What they found was that while the accuracy of a targets position was better in some cases with mosaic radar, sometimes it was not.

For example, a “cone of silence” exists directly above a radar antenna, much as it does over a Vortac, which also uses line-of-sight signals. In the current system at Potomac Tracon, an aircraft about to pass through this cone is handed off to the next controller, whose radar coverage overlaps. In this area over a radar antenna, mosaic would allow a controller to patch in data from several other radar sites. However, a controller would have no way of knowing which antenna is picking up the target an antenna thats 10 miles away or one thats 50 miles away, and therefore less reliable at certain altitudes. For this reason, the FAA was willing to allow mosaic to be used in the terminal environment only if controllers increased required separation between aircraft from three to five miles, which they were not willing to do because it would have created unacceptable delays at the Washington areas three major airports.

McAllister said that mosaic is still installed at the Potomac Tracon in the current ARTS build, but controllers are prohibited from engaging it on operational radar displays. A live version of it is available in the Tracons maintenance area laboratory.

Until technologies like mosaic radar or ADS-B are readily available, there are several things pilots can do to minimize the potential risks of encountering VFR aircraft in marginal weather conditions after a controller says, “radar service terminated.”

First, learn more about the limitations of ATC radar coverage at your destination airport by calling the relevant approach control facility. Second, ask the controller who issues you the approach clearance how low he or she can see traffic up ahead, and ask to stay on the frequency, receiving advisories until you get there. Finally, monitor the airports CTAF and, if possible, announce your position in the blind as you descend toward the runway. Someone just might hear you.