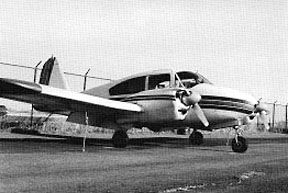 To a pilot, flying presents huge demands that vary in both breadth and depth. More complicated airplanes and more demanding flight profiles increase the load.

Pilots who own airplanes compound the situation. In addition to the demands of piloting, owners must also manage aircraft maintenance – and those stakes also go up as for more complicated airplanes, particularly as they age.

The toll age takes on an airplane is insidious. Parts seldom fail unexpectedly, and after decades of service what was airworthy last week is likely to be airworthy today. But time does eventually break down many airplane parts, and it is the responsibility of the owner and the owners mechanic to right the ravages of age in an aggressive and proactive fashion. And that means impeccable maintenance and inspection practices become ever more important as the years slip by.

Perhaps the pilot of a vintage Piper Apache didnt appreciate the task at hand.

In the fall of 1999 the pilots wife purchased the 1954 Apache from an owner in a nearby town. The airplane had led a relatively easy life, accumulating less than 4,300 hours in its 45 years of service. The pilot kept it in a T-hangar near his home through the winter, but reported to the seller, who calls himself a good friend for a number of years, that the hangars roof leaked and had birds living inside it. In June, the pilot flew the airplane back to the airport where it was based when he bought it.

The airplanes annual inspection was completed on July 21. The next day, the airplane was fueled with 89 gallons, then a few minutes later an additional 5.6 gallons were added.

The Apache took off almost immediately and proceeded south from the airport. Nearly a mile from the airport, a witness reported the airplane barely cleared utility lines that were 35 feet off the ground. He said the airplane passed overhead with the engines sputtering. The airplane was weaving from side to side, then banked to the left in a turn back toward the airport, descended into a field and burst into flames. The pilot was killed.

The pilots logbooks were not recovered. He held a private certificate and instrument and multi engine ratings. At the time of his third-class medical exam three months earlier, he reported total flight experience of 1,650 hours.

Examination of the wreckage showed the cylinders, magnetos and propellers all appeared to be functioning properly, although neither engine was producing significant power at the time of impact. The left engine showed less fire damage than the right one because the wing had sheared on the initial impact.

The carburetor for the left engine provided the initial suspect for the loss of power. A sheriffs office forensic scientist said a mixture of fuel and water was evident, as well as mineral matter, plant matter, fibers, glass-like particles, metallic particles, unidentified particles. The carburetor inlet screens were removed from both engines and found to contain contaminants. They were sent to the NTSB Materials Laboratory for analysis.

Blocking the Way
Examination of the carburetor screens showed the fuel system was, well, a mess. The interior of the right fitting showed extensive corrosion, but the real trouble was found inside the cylindrical fuel screens. In the right fuel screen, the circular end was completely blocked and about 60 percent of the sides of the screen were blocked with debris. The interior of the left fitting was coated with a gooey brown tar-like substance that was not identified. The end of the screen was totally blocked and the sides were about 30 percent blocked.

The debris was analyzed both microscopically and by using spectroscopy. The majority of the debris consisted of flakes of what apparently was deteriorated fuel bladder material. The screens also contained wood fibers and bits of dirt, aluminum and other metals.

Investigators contacted the mechanic who had signed off the airplanes annual inspection the day before the crash. The investigator in charge wrote in his report: [The mechanic] was asked to recall which fuel system filters he checked during the last annual. He stated everything. He was asked if he checked the finger screen in the fuel tanks. He stated that he did not pull the tanks. He stated that this was not a good time to contact him. He was asked to send a short statement to the specific screens checked during the annual at his convenience within the next week.

There is no reference in the NTSB file as to whether he submitted the statement, but the investigators question was not necessarily an indictment of the mechanics skills, conscientiousness or truthfulness.

The Apaches fuel bladders had put in long and faithful service, but were made out of nylon and neoprene – synthetic rubber. The bladders not only were susceptible to deteriorating with age, but also prone to stretching and kinking. The resulting folds can hold water and debris that is not removed by normal sumping of the tanks. In fact, aftermarket wedges are available to help raise spots where the bladders are likely to hold water.

The Apache operating handbook sheds little light on the subject, due in part to the fact that the regulations at the time the airplane was manufactured were not as specific as to what the manual should include as they are in more modern designs.

The manuals discussion of the potential for bladder deterioration is limited to two sentences: The tanks should be kept full of fuel during storage of the airplane to prevent accumulation of moisture and to prevent deterioration of the rubber cells. For long-term storage without fuel, the cells should be coated with light engine oil to keep the rubber from drying out.

With two main tanks and two auxiliary tanks, the Apache held 104 gallons. Because 95 gallons were added to the airplanes tanks only five or six minutes before the crash, its clear the tanks had been very near empty. Adding that much fuel would have agitated whatever debris was in the tanks, suspending the particles with no time for them to settle out again.

Trouble-Free or Neglected?
The question of whether the debris built up over time or was sucked into the carbs in the freshly pumped fuel is an academic one, because the details of the airplanes recent history remain sketchy.

For instance, investigators could not determine how much the pilot had flown the airplane. It had been relocated from a nearby airport a month before the accident, but it was unclear how often the pilot flew it during his brief ownership.

There were also other questions that, although they had no apparent bearing on the accident, raise questions on how diligently the owner was performing the necessary maintenance.

On July 17, five days before the accident, the previous owner was billed more than $6,200 from a propeller shop for what appeared to be an overhaul of both propellers. The invoice included charges for AD compliance as well as used, overhauled blades, used hubs and ancillary parts such as O-rings, gaskets and screws. Copies of the airplanes logbooks were not included in the NTSBs file.

The installation of the used parts raises some questions, however. A post-accident report from Hartzell Propeller put the date of manufacture of the left blades in 1964 and the right blades were manufactured before 1958. The two hubs were of undetermined age, other than that they were very old. Although owners of old airplanes are accustomed to scrambling for parts on occasion, it seems most would balk at installing propellers that were created before the Beatles.

The engines were another issue. The 150-hp Lycoming O-320 engines were long in the tooth. Lycoming determined the time since overhaul on both engines was 2,218 hours and that the overhauls had been done 32 years earlier. While there is no requirement that Part 91 operators observe manufacturers TBO recommendations, the wisdom of entrusting your life to an engine that predates the Nixon White House is also questionable.

In the end, the engines and propellers may have been old because they worked fine and didnt need repairs. Certainly there have been many cases of machines far outstripping the performance their designers expected. However, it may also be a case of an owner trying to squeeze every last drop of use out of something, making minimal repairs – and then only when absolutely necessary.

In this case, we dont know the answer, and it doesnt really matter. The important thing for owners and pilots to consider is that potential trouble can hide in the deepest corners of an airframe.

Dumping in fuel, firing up and taking off within a few minutes is something almost everyone has done at one point or another. Knowing the airplane and what can potentially go wrong may have helped this pilot realize the potential folly at hand.

When the power loss became obvious, as demonstrated by the fact that the engines were sputtering and airplane had climbed barely higher than 35 feet nearly a mile from the runway, the pilot made the understandable but foolish attempt to return to the runway.

The temptation to save the airframe was doubtlessly a strong one, but the area was surrounded by suitable forced-landing sites he could have made even from his low altitude. Even the field in which he crashed would have sufficed if he had put it on the ground after turning 90 degrees rather than trying to eke out another 90 degrees of turn.

Thoughtful pilots of twin-engine airplanes routinely practice engine failures on takeoff. Unfortunately, many of them stop at losing one engine, and fail to consider that a twin, just as a single, can become a glider on a moments notice.

The challenges of flying with two engines, when added to the challenges of operating a first-year version of Pipers first metal airplane, are enough to overwhelm many pilots. In this case, thats exactly what they did.