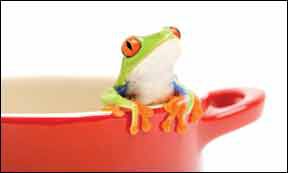 Students of introductory biology learn a basic lesson about sensory perception in a quirky behavior found in certain amphibians that has become common lore. By now we all know that if a frog is placed in hot water, he will immediately jump out to safety. However, if the frog is placed in cool water that is gently heated to boiling, the frog does not perceive the gradual rise in temperature or the impending danger.

Likewise, when a pilot is presented with a problem or emergency that is an obvious attention-getter, he or she will react quickly to solve the immediate threat-a frog

leaping from scalding water. But like the doomed frog sitting patiently in water growing imperceptibly ever warmer, we pilots often miss the cues to the more insidious danger of a mortal threat that results from an accumulation of smaller, less noticeable problems.

We suffer from what is known in the manufacturing world as “process drift” as we accumulate hours behind the yoke. Process drift for pilots is the precise equivalent of that water coming to a slow boil for our hapless frog, now dead and boiled. Coming out of our initial training, we are focused on procedures and safety, but our attention wanes and we become complacent as we build time. Our human nature focuses our attention on novelty; we lose interest in the familiar, making it ever more difficult to take safety seriously as we become more comfortable with and gain proficiency in the airplane.

As a consequence, experienced pilots have been known to fly a perfectly good airplane into the ground, venture into a thunderstorm and come out the other side in pieces, dip below minimums on an instrument approach and fall short of the runway, continue on in severe icing only to drop out of the sky, and attempt to run an engine on air rather than fuel. We hear of pilots stubbornly filling our accident reports with incidents of taking off with and then reacting badly to simple discrepancies like leaving a door open, a fuel cap unsecured, the trim run to the stop, or with primary flight instruments in the panel placarded inoperative. All of these are the result of process drift, a slow, imperceptible degradation in the quality of our procedures and operations.

Manufacturers address this issue of process drift by looking for “root causes.” In understanding why processes are drifting, procedures can be implemented to prevent such drift. We need to do the same in general aviation. In aviation, at least four root causes of process drift and its multiple consequences are obvious: complacency, false confidence, atrophied skills and avionics envy. Lets look quickly at each.

arises from the inertia of past success and from fortuitously positive results from previous indiscretions. “Ive done this a hundred times before.” With each successful outcome, we become ever more insensitive to any brewing dangers, willingly dismissing warning signs upon the weighty evidence of favorable outcomes.

results from our inability to distinguish between dumb luck and skill, usually dismissing the former and claiming the latter. “Ive gone through thunderstorms before and came out just fine. I dont see what the big deal is. I know what Im doing.”

is an inevitable consequence of having a human brain. All of us suffer

from a deterioration of unused skills with time-the use-it-or-lose-it phenomenon. Numerous studies in ergonomics from the worlds of commercial and military aviation have demonstrated beyond doubt that skill retention stays steady for awhile, but plummets precipitously after about six months. This is particularly true for procedures we rarely use in routine flying, such as responding to emergencies we usually encounter only in training. Consider then that most GA pilots train only once a year; any skill set for reacting to an emergency is seriously and increasingly compromised as time marches on between training sessions. If the six-month rule is valid, most GA pilots are ill-prepared to deal with emergencies something like half the time.

compels us to put new gadgets in the panel we are poorly prepared to use beyond their most basic functions. I recently heard an experienced pilot flying a turbine airplane ask in a public forum how he could insert a waypoint into a flight plan on the Garmin 530W. If he does not know how to do that, he will certainly be unable to use more advanced functions like flying a DME arc, activating a particular leg on a flight plan, or distinguishing between the various GPS approaches with and without glideslopes. How about the nuances of using the OBS and SUSPEND options during an ILS, hold, procedure turn or missed approach?

No Reason For It

We also see process drift in weather avoidance. With time and experience, we start shaving our margins, getting closer and closer to those cells as we cross a line of thunderstorms, or take greater risks in crosswinds, pushing the edge of the aircrafts and pilots capabilities, or hang out in ice for just a bit longer before taking evasive maneuvers, and flying in heavy rain down the glideslope of an ILS to minimums. Some of that is perfectly acceptable as we improve our capabilities with time and experience. But with process drift, we can cross the line from prudent gains in experience to dangerous degradation of safety, where our actions exceed our capabilities.

Process drift can be seen in ever-more cursory preflight inspections, and a greater willingness to accept discrepancies before grounding the aircraft. We are-each and every one of us-guilty of this to some degree. This is simply another expression of human nature. Some resist better than others. But we are all vulnerable to the idea, that, “Hey, if everything was working on the last flight, why bother checking?”

The NTSBs accident reports are full of commercial and GA accidents that could have been easily prevented with a more thorough preflight inspection and proper use of a pre-departure checklist. For example, Delta Air Lines Flight 1141, a Boeing 727, crashed on takeoff when the crew failed to properly set the flaps and slats. A de Havilland Dash-4 crashed after liftoff because the pilot failed to remove the gust lock.

A Cessna 210 landed gear-up because the nose gear was jammed by a tow bar the pilot neglected to remove during the preflight. This pilot might well say, “Weve all heard the adage that there are pilots who have landed gear up and those that will.” And I say, “Nonsense.” There is no reason you should ever land gear-up. I am not claiming I never will; but if I ever do, the cause will be my failure to control process drift. In that case, the drift would be away from the rigorous use of checklists and fidelity to proper procedures.

We also see process drift in how we manage equipment wear and tear; over time, aircraft systems and avionics need tender loving care to remain within spec. But without a diligent maintenance program, we can allow our aircrafts cables to get saggy, the pressurization system to leak, corrosion to spread, autopilot to oscillate off the desired course or altitude, flaps to wiggle just a bit too much, oil to leak a bit more than it should, or struts to lose some clearance. These types of slow degradation are often insidious, just like that water getting ever, but imperceptibly, warmer.

The best cure for process drift is to acknowledge the phenomenon. We cannot fight complacency if we are unaware of being complacent. We will not be motivated to step up our maintenance program if we do not recognize the process of slow degradation. We will make excuses to avoid training twice a year if we ignore the compelling evidence that not doing so is dangerous.

So what can we do to prevent process drift and tackle the root causes of aviation accidents? Jeffrey Liker, a former executive at Toyota, explained that the auto manufacturer bore down to their problems root causes with “a very sophisticated technique; it is called five-why. We ask why five times.” What that means is that few problems are more than five degrees of separation from the problem initially discovered and that problems ultimate cause. This principle of five-whys can be broadly applied to discover root causes in almost any circumstance in virtually any industry, including aviation.

By being vigilant against the insidious drift regularly robbing us of our safety margin, we can mitigate danger, manage risk properly and be better and safer pilots. We do so by making a concerted and conscious effort to avoid a fate similar to that poor clueless boiled frog. Beware of slow creep. And train twice yearly.