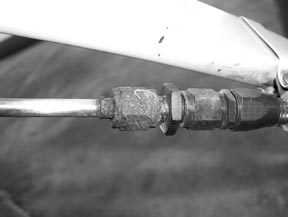 Like anything manmade, airplanes are trying to fall apart from the moment theyre built. But airplanes are unlike most machines in that owners expect longevity, strength and aesthetic purity for decades – hopefully at a cost that doesnt give the owners creditors the willies.

The number one enemy of such a record is corrosion.

Corrosion involves any of a series of complex chemical interactions. It attacks different metals in different ways in different circumstances. But the bottom line is that anything made of metal will start to corrode. The variable is how long it will take before the corrosion is a problem.

Its expensive to repair. By some estimates corrosion is overtaking accidents as the primary reason airplanes are written off as destroyed, due to the aging of the huge bubble of airplanes produced in the 1970s. That makes prevention worth much more than a pound of cure.

While corrosion can occur on any metal, the most common places to find it are where the metal is not painted, where its exposed to corrosive agents, or where it never gets cleaned. That makes battery boxes, control surface hinges, landing gear and below the floorboards prime spots for metal deterioration.

It is also likely anywhere dissimilar metals come into contact with each other, such as where steel landing gear components are bolted to aluminum structure or where stainless steel fasteners go through aluminum alloy sheet metal.

Detecting corrosion starts with visual inspection. And that doesnt just mean the pre-flight once-over. One way to inspect for corrosion is to wash the airplane by hand. Such intimate contact helps you see a wide variety of surface flaws. In fact, we know one airplane owner who insists he wont buy another airplane without washing it first.

When inspecting the airplane, look for white/gray powder, which is evidence of magnesium or aluminum corrosion. Look for bulges along lap joints, and worm lines or blisters under the paint.

Beyond visual inspections, there are dye penetrants, ultrasound, X-rays and borescopes. All help get a handle on what is happening in the deep dark recesses where dirt and moisture lie undisturbed.

Cleaning
Any corrosion you find needs to be removed. It will not get better on its own, after all. On bare metal, remove corrosion with a mild abrasive cleaner. But make sure the cleaner does not have chlorine in it.

Scrub with a plastic or fiber pad, or aluminum wool. Do not use a steel wire brush or steel wool on aluminum. Traces of steel will imbed in the aluminum and cause dissimilar metals corrosion in short order.

If the corrosion is severe, use a rotary file or power grinder – but do so with caution. The material can be substantially damaged because these devices can remove a lot of metal in a hurry, weakening the part.

For minor surface corrosion and small pitted areas, feather out the edges of the pit with fine sandpaper and polish out the scratches with metal polish.

Corrosion can rapidly turn into a messy, involved job. Much of the work involved is just physical labor, but correctly disassembling and reassembling parts to get at the work site may require the services of a mechanic. In addition, keep your mechanic informed of what youre going to do and get his or her take on whether the corrosion has reached the stage where the part needs to be replaced instead of simply cleaned.

Treatment
Once the area is free of corrosion, it needs to be treated to stall the cancers return. Depending on the part, you can start with some kind of chemical alodine. It can be applied to aluminum parts that have been cleaned of wax, oil and grease. You can dip small parts in it or brush it on larger ones, and when it dries it is hard-coated but still electrically conductive. Henkel Surface Technologies even has an alodine pen that looks and works like a highlighter.

If you dont want to alodine but you do want to paint, primers such as Ospho or zinc chromate can stop corrosion and help the paint adhere well.

Some components, however, are not painted, including the inside of the wings and fuselage. This reality has created a cottage industry of corrosion preventives. They generally fall into two categories – oils and waxes.

Most involve spraying or fogging onto the surface. Popular products such as CorrosionX, ACF-50 and Boeshield T-9 fall into this category. The first two remain oily and protect the surface for up to two years. Boeshield dries to a wax film the manufacturer claims remains effective for three to five years. All three claim to neutralize existing corrosion as well.

For exposed metals such as the propeller and stainless steel fittings, some mechanics advise simply wiping with a water-displacing lubricant such as WD-40 every so often. This has the advantage of being cheap and simple, but suffers from continual upkeep. In addition, WD-40 on some surfaces will attract and retain dirt, creating as much of a problem as its solving. But for something like propeller blades, its a proven winner.

Avionics
Avionics are a more difficult problem for several reasons. Breakers, contact points and switches are particularly vulnerable. Ask any owner of a retractable gear airplane how many times the squat switches on the gear have needed maintenance and youll quickly be convinced.

Conventional treatments such as painting and coatings may not work because they can cause equipment malfunctions. Only a small amount of contaminant or corrosion can cause big trouble by inducing short circuits, intermittent squawks or complete component failure.

Electronics are problematic because, by their nature, dissimilar metals are in constant contact with electrical current present. Stray currents abound and the metals are unprotected. Furthermore, the avionics boxes themselves are often closed and can harbor condensation – particularly if the installation includes a cooling fan using outside air.

Finally, the boxes are typically not opened up and inspected for corrosion, allowing it to take root until something malfunctions.

To stay ahead of corrosion, keep the airplane as clean and dry as possible. If you live in a coastal region, inspect for corrosion every couple of weeks and treat if necessary. If you live in a humid area, inspect every 45 days. In drier climates, check every three months.

For more on corrosion spotting, removal and control, see Advisory Circulars 43-4A and 43-13-1B. Its the best way to ensure you and your airplane can grow old happily together.