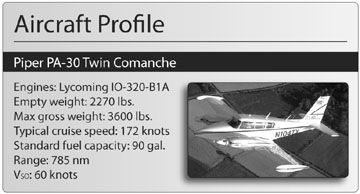 Having the talent and skill to fly an airplane pretty much when and where we want doesnt mean we should. Any number of factors may from time to time argue against making a trip or completing one. Weather, terrain, mechanical shortcomings, time of day and/or some combination of these factors all figure prominently in the go/no-go decision-and in the decision to keep going. Even though our magic carpets offer us freedom, flexibility and the ability to cover more territory in less time than the option of buying an airline ticket, we still must exercise some discretion and thoughtful planning in how we use them.

Many of us have learned to read and understand weather reports and forecasts-the exploits of those who havent are often found in these pages-but we frequently lack the ability to assess our own readiness for a flight, especially a long one or one involving a series of stops over a single, long day. Its one thing to spend a Sunday afternoon running around town making multiple stops and completing several errands, but its quite another to spend that same Sunday bouncing around the eastern seaboard in an airplane flown single-pilot. Sometimes, we have to consider that we might be a little fatigued for that last leg, park the airplane and find a good meal and a warm bed.

That option would have been the best one for a the pilot of a PA-30 Twin Comanche who died on October 26, 2003, during an ILS approach to the Spartanburg (S.C.) Downtown Memorial Airport.

The pilot held a Commercial certificate with an Instrument rating and SEL/MEL privileges. The pilot reported 1921 total civilian flight hours on his most recent application for an airman medical certificate.

According to a co-worker, the flight departed Spartanburg (SPA) that morning. The pilot flew the airplane to Lawrenceville, Ga. (LZU) then to Lexington, Ky. (LEX). From Lexington, the Twin Comanche flew to Evansville, Ind. (EVV). The accident occurred at the end of the flight from Evansville.The NTSBs final report does not include the airplanes departure and arrival times, but we can presume at least 30 minutes on the ground at each destination, plus another 30 minutes or so before the initial takeoff earlier that day from SPA. Further, the great circle distance SPA-LZU-LEX-EVV-SPA is 825.5 nm; at an average groundspeed of 150 knots, thats a flight time of at least 05:30 spread over four takeoffs and landings. Add in at least two additional hours of pre-flight and ground operations, and weve got a 07:30-long duty day for this pilot, at a minimum.

And, of course, the weather wasnt too cooperative. According to historical weather data, only Evansville had decent weather on October 26, 2003, and that was late in the day. The other stations generally reported rain, overcast skies and occasional gusty winds throughout the day. Though the available data does not indicate low ceilings, its likely all four legs were flown in at least some IMC and that the accident pilot made at least one other instrument approach during the day.

According to a family member, the pilot telephoned from Evansville prior to the accident flight to advise he was running late for a birthday dinner they had planned for him that evening. The family suggested to the pilot that he could stay the night in Evansville, Indiana, and visit the following morning instead. However, the pilot elected to return to Spartanburg that evening.

Air traffic control records reveal nothing remarkable about the flight or communications with it. Apparently, the Twin Comanche lacked on-board radar or a sferics device since the approach controller offered to vector the arriving flight around weather in the Spartanburg area. Soon, the pilot was cleared for the ILS approach to Runway 5 at SPA and released to the local advisory frequency. No further radio contact was made with the flight.

Radar data reveal the flight intercepted the Runway 5 localizer and descended on course toward the airport. At 2208:51, the last recorded radar plot showed the airplane at an altitude of approximately 1800 feet msl and aligned with the Runway 5 localizer 2.8 nautical miles from the runway threshold. According to ATC personnel, this position is the expected lower limit of the radar coverage for the area.

Witnesses reported hearing a low-flying airplane whose engines revved up, followed by popping and crashing noises. The airplane was found on the ground in flames.

Investigation
The accident site was in a wooded area 0.7 nm from Runway 5s threshold and about 950 feet right of the localizer centerline. Wreckage was scattered for approximately 300 feet along a 110-degree magnetic heading. All major components were located within the debris field. No pre-impact anomalies with the airplane or its engines were found.

The published approach procedures for the ILS Runway 5 at SPA is conventional, with a decision altitude of 1001 feet msl and visibility of mile. The missed approach procedure involves a climb on runway heading to 1300 feet msl, then a climbing left turn to 3000 feet direct to the Spartanburg VORTAC and a hold.

The NTSB determined the probable cause(s) of this accident to include the pilots failure to follow IFR procedures and descent below the glide path, which resulted in an inflight collision with trees during an instrument approach. A factor was the pilots impairment due to the sedating effects of medication.

Conclusion
Fatigue is just as likely a scenario as to why this pilot lost it in the final few seconds as is the NTSBs finding of medication-induced impairment.The autopsys carbon monoxide finding is interesting, also. Since he apparently was based at SPA, the pilot had probably flown this approach many times. An ILS to minimums is the last place Id be relaxed, even at home plate, but maybe he let down his guard at the end of a long day. Maybe he got busy or distracted and let the plane get off the ILS until it was too late.

Its easy for us to suggest that choosing to sit out this flight in a hotel back in Evansville would have prevented this accident, but theres really nothing in the NTSB report that constitutes a smoking gun, including the medications. Ive certainly had my share of long days in an airplane, and I cant say I was fully alert and rested at the end of them. Taken together, however, this accidents facts should serve as a wake-up call for Part 91 operators, who lack rest period rules.

Also With This Article
“Fatigued?”