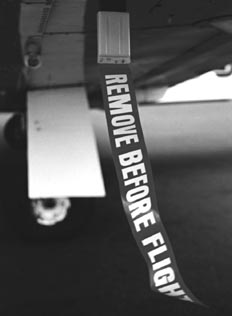 Preflight inspections have to cover a lot of bases, but there is one class of accidents that illustrate how some pilots apparently dont conduct even the most superficial of walk-arounds.

A study of the NTSB accident database revealed 40 accidents over a 19-year period in which the pitot tube or another component of the pitot system was listed as a probable cause of the accident. In another 122 accidents accident investigators suspected the pitot system shared some of the blame. Since incidents are typically not included in the database, an unknown number of incidents also happened in that period. In addition, a number of pilots probably smoked their tires aborting takeoffs without generating a reportable episode.

Fifteen accidents involved contamination of the pitot tube while the airplane was on the ground with no protective pitot cover in place. Two were fatal and thirteen were non-fatal. Further analysis revealed that all but two of these were caused by insect nests – mainly mud dauber wasps. In at least one of these cases, the obstruction could not be detected visually. The other two contaminants were not detailed in the NTSB reports.

Five accidents involved contamination of the pitot tube while the airplane was airborne. Three were fatal and two were non-fatal. Of interest, all of these involved the pilots failure to use pitot heat while flying in icing conditions.

Eleven accidents involved failure to remove the pitot tube cover prior to takeoff. One was fatal and 10 were not. Eight of the airplanes were singles, with the others being a Learjet, a twin Cessna and a Beech Baron. Of the singles, four were high-wing; four were low-wing. The fatality involved a low-wing single departing into IMC.

From this profile it is easy to see how other accidents – loss of control in IMC, for example – may have had roots in an airspeed indication problem, but the problem was destroyed along with the airplane. Some have speculated that one factor in the string of Piper Malibu breakups that led to the types certification review, for example, may have been pitot icing while on autopilot.

Training Roots
An early concept every beginning pilot is exposed to is the role of airspeed in allowing an airplane to fly. That necessarily includes the importance of and details of the pitot/static system. It is well known that mud dauber wasps and other insects are attracted to the ram-air openings in pitot tubes. The size of this opening is especially attractive for the insects.

Pilots are trained to scan the airspeed indicator during the takeoff roll to assure a normal increase in airspeed up to rotation speed and normal climb speed. Its also clear that pilots need to observe proper airspeed during the approach and landing phases.

During instrument flight training, the importance of using pitot heat when flying in potentially icing conditions in IMC becomes apparent. Without pitot heat, the pitot tube can become contaminated with ice crystals, resulting in inaccurate airspeed readings. Some instructors even advocate the use of pitot heat whenever there is visible precipitation, regardless of outside air temperature.

Contamination on the ground is another matter, and one that is just as easily addressed. Preflight inspection is paramount to a safe flight.

The Takeoff Challenge
The accident data show that, except for low-level maneuvering, takeoff represents the phase of flight that causes the most fatal accidents. It also represents the second-highest number of total accidents, after landings, which are only occasionally fatal. A review of 2001 data shows that takeoff and landing accidents accounted for 55 percent of all known-cause accidents, with the takeoff phase being by far the more dangerous.

Clearly preflight preparation is key to solving much of the takeoff trouble. The FAA most recently tackled this problem in 1985 with the issuance of Advisory Circular 61-84B, which addresses the critical role of preflight planning in conducting a safe flight. Among others statements, the AC 61-84B points out the following:

One of the most often neglected acts of a pilot contemplating flight in an aircraft is that of proper preflight planning. While the reasons remain obscure, the facts are well supported by aircraft accident statistics. Although the number of general aviation accidents has shown a downward trend in recent years, the accident and fatality/serious injury statistics indicate an increase in the percentage of accidents during takeoff.

The AC further states that about 20 percent of all general aviation accidents and about 16 percent of all fatalities and serious injuries stem from takeoff.

Pilots typically emphasize the en route and approach/landing phases of flight in their planning. They watch the route, weather, facilities, approaches and fuel requirements. Accident data, however, indicate that too little preparation is made for the actual takeoff of the aircraft.

Clearly, if preflight planning is so critical to a safe flight, and if the safety of the takeoff phase is particularly dependent on a thorough preflight, its clear that pilots are failing in this area.

Unfortunately, aircraft designers can never eliminate all the potential hazards associated with flying. For example, they cant eliminate the pitot tube, and they cant kill all the mud-dauber wasps and spiders that build nests in the pitot tube.

Since the hazard will still exist, the next most effective step in improving safety is to utilize safety devices to block the aircrafts interaction with the hazard. The pitot tube protective cover meets this criterion perfectly. It covers the pitot tube, thereby blocking the insects or spiders from gaining access to and contaminating the inlet.

Unfortunately, having the pitot cover in place is a hazard to flying, and were back at square one where we are relying on training and procedures – the preflight inspection – to result in reliable removal of the cover prior to flight. Barring that, you have to rely on training that allows the pilot to complete the takeoff and land safely without the airspeed indicator. But this, again, relies on an inefficient method of reducing risk.

The solution, then, is to design a pitot cover that, if the operator neglects to remove, disengages automatically. That way, you addressed a potential hazard with the safest method of risk reduction: changing the design to eliminate a hazard.

Hardware Solutions
Pitot tubes are typically protected while on the ground by using pitot tube covers of various designs. They include flexible plastic tubes that fit tightly onto the pitot tube or covers that fit loosely over the pitot tube and attach with Velcro or other means. These types of pitot tube covers typically have a remove before flight streamer hanging from them as a visual aid in reminding the pilot to remove the pitot cover during preflight.

Unfortunately, as the accident record illustrates, it is not uncommon for a pilot to miss removing the pitot tube cover, or miss examining the opening of the pitot tube for foreign object debris. That failure may be due to distraction or dark night conditions, but what it really boils down to is the fact that many pilots conduct rushed or inadequate preflight inspections.

Applying technology to the problem, designers have come up with other solutions. There is a pitot cover designed to attach to the pitot tube with a flat cover that pivots. The cover rests in place by gravity over the pitot hole while the airplane is stationary, but swivels up when there is a significant wind force resulting from forward velocity. The result is a purportedly normal ram air pressure.

In at least one of the accidents cited, the cover malfunctioned. The report implied that the installation involved was improper or unapproved.

Recently DeGroff Aviation unveiled an improved pitot-tube cover that not only keeps insects and spiders from gaining access to the pitot tube opening, but disengages and falls harmlessly away from the aircraft during the takeoff roll if its not removed during preflight.

This improved pitot cover significantly reduces the potential for an accident, and therefore will reduce the number of accidents occurring in the most critical phase of flight. The foam cover sticks onto either pointed probes or most of the blade-type pitot tubes and presents a flat face into the wind during the takeoff roll. At about 50 knots, the wind resistance is enough to blow it off. The ethylene vinyl acetate foam wont hurt an airframe or propeller. What it might do to a turbine engine is open to debate, with some manufacturers saying it wont hurt at all and others taking the position that the engine would be inspected as after a bird strike.

Trusting yourself is one thing, but trusting a simple, inexpensive hardware solution to such a critical problem may, in the long run, be a better idea.

Also With This Article
Click here to view “ASI on the Fritz.”

Steven DeGroff, a doctor of optometry, owns a Piper Comanche 400 and decided to improve pitot covers after neglecting to remove one before attempting takeoff.