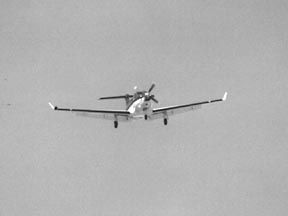 Most general aviation aircraft are equipped with flaps and manufacturers recommend using full flaps for landing under normal conditions. However, there are some circumstances in which the flaps are unavailable for landing.

A no-flap approach is considerably different from a normal full-flap approach. The major differences include approach speeds, speed stability, pitch attitude, the flare and landing distances.

Flaps range from electrically actuated to manual to hydraulic. Electrical or hydraulic failures can make it impossible to extend flaps. They can freeze in the up position due to water in the flap actuators or tracks freezing at altitude. Indifferent maintenance can lead to split flap conditions in which the flap on one side will deploy but the other will not. Tracks can crack and bearings can seize.

Regardless of the reason, the end result is that the flaps will be stowed when its time to put the airplane on the ground. The question then is if youre ready for it.

Faster Approach Speed
Flaps increase the lift of the wing by a significant amount. If the approach is executed without flaps, the pilot must make up for the lack of added lift normally obtained from the flaps by flying the approach at a faster airspeed. One problem arises in that the flight manuals for many light airplanes dont publish a recommended speed for a no-flap approach.

Without it, check the manual for a clean configuration stall speed, then multiply this by 1.3. If thats not there either, use the bottom of the green arc of your airspeed indicator, and multiply that by 1.3.

But even that requires some discretion. For example, the green arc bottoms out at 59 KIAS in a Cessna 206, while the white arc goes down to 47 KIAS. Checking the stall speed charts, however, reveals those speeds apply only to the most forward center of gravity at max gross weight – a condition most pilots will never see. A more likely scenario, max weight at most rearward center of gravity, has stall speeds of 50 KIAS flaps up and 39 KIAS with full flaps.

In addition to increasing your final approach speed, you should also increase your airspeed during the downwind and base legs from the speeds you would normally use during a flapped approach. Be aware that one of the side effects of the increased airspeed is a larger turn radius, so begin your turn to the final approach leg a bit earlier than normal to prevent overshooting the extended centerline of the runway.

Slippery Airspeed
Besides producing lift, the flaps also produce drag, especially when you deploy the flaps beyond 20 degrees. At this point, the flaps create only marginal increases in lift, but the drag dramatically increases. During a normal full-flap approach, the drag is quite considerable. A prudent pilot proactively applies an appropriate amount of power to counter the drag. This allows the airspeed to settle nicely.

A no-flap approach involves far less drag, so the power setting required to execute the approach is considerably less even though the airspeed is higher. Some airplanes may be harder to maintain on speed on final approach without the flaps. It can be easy to allow the airplane to accelerate past the recommended approach speed, and in turn, its harder getting the aircraft slowed down.

Without flaps, the slip becomes an effective tool for managing drag that will help you keep the airplane on speed and glidepath. That is, if your airplane is approved for slips. Surprisingly, slips are not approved in some airplanes because of the effect of turbulent airflow on the flight controls on the tail. In addition, slips are not approved in most jets because it disrupts the airflow through the compressor, possibly resulting in a compressor stall or hot section damage. Turbine engines are more prone to compressor stalls during strong crosswinds and slips.

But for most general aviation aircraft, a slip is an allowed procedure. If there is a crosswind, dont forget to lower the upwind wing into the wind and keep the nose aligned with the runway with the opposite rudder.

Nose-High Pitch
When flaps are deployed in a normal approach, the increase in lift is considerable, leading to the need to pitch down to avoid an unwanted increase in altitude or decrease in airspeed. This is a good thing. It allows the aircraft to be landed at a slower airspeed and therefore use less runway. The lower pitch attitude also improves visibility over the nose.

During a no-flap approach, none of these factors come into play. Without the added increase in lift from flaps, the pilot must fly the approach at a faster airspeed and a higher angle of attack, which translates into a higher pitch attitude during the landing approach.

The higher nose pitch attitude makes the runway appear lower in the sight picture, tricking the pilot into believing that the aircraft is higher above the ground than normal. Hence, there is a tendency to want to drag in a no-flap approach. If possible, practice no-flap approaches at an airport equipped with a glideslope, VASI or PAPI to help you avoid falling victim to this landing illusion.

Less Drag Means Easy to Balloon
Not only is the approach different when the flaps are stowed, so is the landing flare. The aircraft enters the flare with extra airspeed but the slippery airframe doesnt bleed off the airspeed as well as it does with flaps deployed. Even a slight amount of over-rotation during the flare can cause the aircraft to balloon.

Of course now the aircrafts speed bleeds off while the nose is even higher and the aircraft is several feet above the runway. Its rather common to see a hard landing result after this. You need to be extra gentle with the flare during a no-flap landing.

Like any other landing, its good practice to land on the centerline and maintain the centerline. Dont be surprised if directional control is touchier during a no-flap landing.

The touchdown speed in a no-flap landing is higher than during normal landings. This increases the likelihood of some directional control problems during the roll-out since very small rudder movements now result in faster deviations from the centerline. For this reason, choosing a wider runway with the wind aligned down the runway is certainly a valid consideration.

Longer Landing Distance
Consider other ramifications of the increased speed. For example, if the normal full-flap final approach speed is 55 knots and the no-flap approach speed is 65 knots, the extra 20 percent of airspeed adds 44 percent to the landing energy of the aircraft. Many older aircraft manuals do not publish landing distances for no-flap landings, which means you should plan to need 50 percent more stopping distance for a no-flap landing.

Other Considerations
In a jet transport, a no-flap landing is an emergency procedure. In the first place, a no-flap landing can be challenging because jets are more slippery than piston airplanes. Therefore, a jets speed is going to be much higher on touchdown.

More importantly, a flap failure in a sophisticated aircraft is generally associated with other system failures, such as a hydraulic system failure that impairs the normal braking system, gear extension and nosewheel steering.

Needless to say, with the complexities and interactions of jet operating systems, a no-flap landing will require declaring an emergency and may require completing several long sets of emergency checklists. A long, wide runway aligned with the wind would be the crews first choice.

If the flaps are electrically driven, its likely that an electrical system failure caused the no-flap condition. Other electrical systems may be compromised, which would include the communication and navigation radios, transponder, turn-slip indicator and landing gear.

In VFR conditions, you can live without everything except the gear, and theres likely an emergency extension system that will take care of that problem. Simply choose an airport with a nice long runway. IMC becomes a much more complicated problem because of the associated need to shoot an instrument approach successfully before the juice runs out.

No-flap landings are definitely a good practice maneuver you should try the next time you are out flying and want to expand your aircraft handling skills and knowledge. It will also prepare you for the possibility of a real no-flap landing in the future.

As a matter of practical decision making, if you have a real no-flap situation, you might want to choose a long, wide runway better aligned with the prevailing wind just to lower your workload. You certainly dont need to stack the odds against you by adding another difficult handling situation.

Also With This Article
Click here to view “Are Flaps Speed Brakes?”

Pat Veillette is an aviation safety researcher and Part 121 pilot.