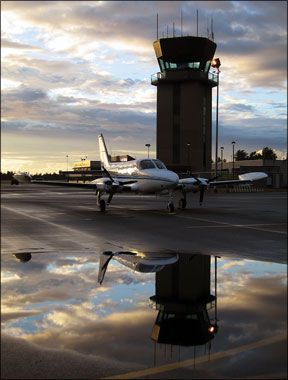 Thunderstorms can impede our progress any time of the year. If we kept the plane in the hangar every time a forecast called for them, however, wed almost never fly in the spring and summer months. To learn how to safely dispatch and conduct a flight in areas of thunderstorms, weve asked pilots “on a mission” to fly in almost all conditions-priority cargo and business transportation-what it takes to make it to their destination on schedule.

More important, we also asked when storms are strong enough to sit it out despite

the sometimes severe economic consequences. With far less stress to “go” than these commercial and business operators, pilots of owner-flown airplanes can learn from their expert strategy for thunderstorm avoidance.

Ameriflight is a major Part 135 air cargo operation, serving over 200 cities across North America with more than 2100 departures a week. The carrier operates a fleet of over 170 aircraft, mostly commuter-size turboprops and Learjets. To meet such a demanding schedule Ameriflight cant afford to take unnecessary risks with thunderstorms. About half of its airplanes are unpressurized, and most operations are below 19,000 feet, so theyre in the thick of the weather.

When it comes to thunderstorm avoidance, John Hazlet, vice president of safety and standards, as well as director of operations for Ameriflight, knows what hes talking about: “I cut my teeth flying DC-6s with a 50,000 watt, 36-inch dish radar,” Hazlet says.

Perhaps as a result, Ameriflights operations manual weather training supplement states: “No thunderstorm should be considered minor.” The manual also gives a simple warning: “Thunderstorms are not to be penetrated.” So how does Hazlet recommend his pilots stay clear of storms? He gives these basic guidelines:

When deviating around storms, maneuver on the upwind side so wind isnt carrying the storm toward you, and to avoid hail that might spew from the anvil top.

Avoid flying under thunderstorm cells themselves, where you may find powerful turbulence and intense rain or hail.

Several of Ameriflights airplanes are equipped with Stormscopes. When using these lightning detectors, Hazlet instructs, maneuver to keep concentrations of lightning strikes (if using strike mode) or indications of cells (in cell mode) outside the 25-mile ring around your aircraft. Whether using radar or Stormscopes, Hazlet advises, the altitude band from the freezing level to about 5000 feet above the freezing level (0 deg. C to -10 deg. C) is the most active part of the storm where-if you penetrate the clouds-youre likely to find very rough air, strong up- and downdrafts, and ice.

A few Ameriflight airplanes have Nexrad weather uplinks in the cockpit. This is “as good as, or even better than airborne radar,” according to Hazlet, who highly recommends uplinks for the “big picture” weather information they provide.

No matter what type of on-board weather equipment you have, Hazlet teaches, “ATC is a lot better than it used to be” in plotting thunderstorms with its radar. He advises pilots to “use ATC” to “confirm they see what youre seeing” with airborne equipment, and to provide basic thunderstorm avoidance information if you dont have any in the cockpit. And most of all, Hazlet says, dont forget to use the “Mark One eyeball” to maintain visual separation from cumulonimbus clouds if you can see outside-its the best (and only sure) way to avoid thunderstorms.

Orlando, Fla.-based Flight Express is an air courier service operating nearly 100 Cessna 210s and Beech Barons on routes throughout the Southeast and Midwest-prime thunderstorm country. Austin Collins is chief pilot for Flight Express, and reports that since his companys airplanes do not have airborne weather radar, its operations manual states: “No company aircraft will be operated in the vicinity of thunderstorm activity unless the flight can be conducted visually.”

Collins says it is incumbent upon the pilot-in-command to determine whether he/she can see and avoid convective activity. If not, the PIC must work with company dispatchers to reroute, delay or (if absolutely necessary) cancel a scheduled flight. If airborne conditions change, the PIC has FAA (and company) authority to divert if embedded thunderstorms begin to develop. Collins pilots are trained to make an early decision to land, wait out storms and complete the flight as soon as clearer skies appear.

“The final authority over the safety and legality of the flight always rests with the PIC,” Collins reminds us. “As a Part 135 operator we seek to hire pilots with the intelligence, good judgment, maturity, aeronautical experience and common sense to make these kinds of decisions.” For success meeting schedules when thunderstorms threaten, Collins says, “Very simply, dont go unless you can see” and avoid the storms.

The fastest growing segment of owner-flown airplanes is fractional ownership. Rich Bertoli is chief pilot for AirShares Elite, which manages Cirrus SR22s in fractional programs around the country. Many of the programs owners use their airplanes as business tools, meaning weather capability is highly prized, and the distraction of sometimes monumental financial pressures that ride on arriving on time make it imperative to have the very best information for good go/no-go decisions before and during flight.

Each AirShares Elite airplane includes XM satellite datalink for Nexrad weather radar displayed on the multifunction display (MFD), Bertoli says, “not found in most airplanes of [the owner-flown piston] class.” The XM weather datalink is “great,” says Bertoli. “For making an informed decision, its just gold.” But he cautions against putting too much faith in weather uplinks. “Picking your way through thunderstorms is not what Nexrad is designed for,” he says. Information can be several minutes old before it shows up on the MFD. “You cant fly [Nexrad] like its real on-board radar.”

AirShares MFDs also display L3 Communications Stormscope lightning data. But the Stormscope is “not as intuitive as it might seem,” cautions Bertoli. Theres a distinct difference in interpreting the display, depending on whether it is in the strike mode or the cell mode.

Bertoli references the avionics manuals to differentiate between “strategic” flight planning-making a go/no-go decision and picking a route and altitude based on whether or not storms are popping-and “tactical” planning, or picking a specific route between existing thunderstorm cells. Cockpit Nexrad and Stormscope are “definitely a strategic, not a tactical tool.”

Overall Bertoli teaches AirShares Elite owners to “respect the limitations of the equipment.” He especially warns of embedded thunderstorms-the pilots eyes are a “huge component of thunderstorm avoidance.”

Flying turbine or piston-powered airplanes with airborne radar, lightning detectors or live Nexrad uplinks, pilots on a mission to complete high-priority flights in areas of thunderstorms agree with the basic information we learned when studying for our private certificate and instrument rating. Stay informed, stay well clear of storm cells and stay in visual contact as the primary means of thunderstorm avoidance.

A decision to “go” is not a single choice made before taking off, but a continual chain of decisions based on conditions as they unfold outside your windscreen. Heed the experience of experts “on a mission” when you fly near thunderstorms.