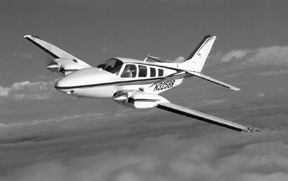 Most pilots can be accused of wanting it all. They want a big, fast airplane that sips fuel, flies high and lands slow. They want to fill the tanks and the seats and the baggage compartments all at the same time. They want responsive handling thats also stable when shooting an approach. They want practicality and sex appeal on a budget.

It turns out that all airplanes are compromises, and how any pilot makes that personal selection of whats important and whats not is a reflection of both the pilot and the environment in which he expects to fly. Likewise, the choices a pilot makes during a flying career determines how he flies and, ultimately, when he flies no more.

Most aviation accidents begin with a pilots reasonable expectation of making a safe flight, but then through errors or misfortune the chain of lost outs builds up until theres nowhere to go but disaster. Occasionally, however, an accident serves to drive home the fact that some accidents are years in the making.

At about 10:30 one April night, the pilot of a Beech Baron called the Miami Flight Service Station to get a weather briefing for a 200-mile trip from Palm Beach International Airport to Kay Larkin Municipal Airport in Palatka, Fla., about 50 miles south of Jacksonville.

The briefer described instrument conditions throughout the route of flight. Temperatures and dewpoints were within a few degrees of each other. Fog, haze and light rain was reported. The pilot acknowledged the information, thanked the briefer and hung up.

A half hour later, the Baron took off into the haze.

Two hours later, a man watching a movie at his property adjacent to the Palatka airport heard an airplane pass low over the building. Then it passed low again.

He then asked if the pilot was trying to land at Palatka, and the pilot replied he was. The pilot asked conditions on the ground.

The witness said he could see both ends of the 5,003-foot runway and estimated the visibility at over two miles, with the ceiling about 500 feet. He relayed the information to the pilot and suggested the pilot click his mic to activate the runway lights.

The pilot turned on the lights and said he was going to shoot the NDB approach. On his first try, he was about a quarter-mile to the north of runway 9.

On the next approach, the airplane broke out of the overcast over the runway. The gear was down and the flaps were configured for approach. However, the airplane was banked precariously.

When the aircraft broke out it was in a 30-degree bank to the right and his sink rate was very high, the witness told investigators. I told him to level the wings and pull up, pull up. I then heard the aircraft go to full power. He raised the nose up but never leveled the wings. Aircrafts sink rate never changed.

The airplane struck the ground right wing low about a tenth of a mile south of runway 9 and about 3,500 feet down the runway. The wreckage path extended about 90 feet along a heading of about 170 degrees. The fuselage came to rest against a large tree. The estimated 100 gallons of fuel on board caused a fire that destroyed the fuselage. The pilot died in the crash.

An examination of the wreckage found no mechanical faults with the airplane, however, the fire destroyed so much of the fuselage and damaged the engines so badly that it was impossible to rule out mechanical problem.

The first police officers on the scene estimated the visibility at the time was less than a quarter mile. Weather reports at nearby airports listed visibility of one mile and a 100-foot ceiling at St. Augustine, 30 miles from Palatka, and two miles and 300 feet at Gainesville, 35 miles away. There was no moon.

Why Was He There?
The pilots logbooks were destroyed in the crash, so his recent experience remained uncertain. On his last application for his Class III medical certificate, issued two years before the crash, the pilot reported 1,800 hours. The NTSB report lists his time in type at 123 hours, but gives no indication of where this figure was obtained.

Tragically, an autopsy showed a disastrous choice the pilot made. His blood alcohol level was .29 percent.

It would be easy to hang this accident on the lousy approach or the alcohol and let it go at that, but this accident was set up long before the pilot descended far below minimums, took his first drink that evening or even stuck the keys to the airplane into his pocket.

Interestingly, the pilot was not instrument rated, despite owning a sophisticated, nearly new traveling machine in the 1996 Baron 58. Though he had the resources to buy the Baron, he chose not to pursue the most safety-oriented of all ratings.

There are a lot of pilots who fly 2,000 hours safely without instrument ratings, but they dont knowingly launch into foul weather, either, especially while intoxicated.

Everything about flying represents compromise of some sort – the ability to sort out smart choices from a crowd of options at each step of the way.