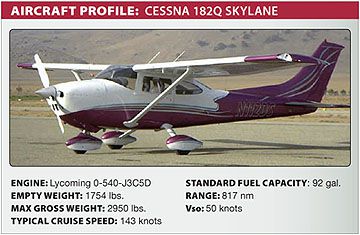 Its often easy to forego obtaining a full weather briefing before a flight. Looking at the weather as we drive to the airport, we assess the local conditions, noting the cloud cover and bases, check visibility by seeking out distant landmarks and note if any other airplanes are flying.

During a quick turn, we dont take time to pick up a phone to call the local AFSS-after all, we just came in and experienced that weather, didnt we? We should be telling them about it, not the other way around.

When I know I have a cross-country flight coming up in a few days, Ill monitor The Weather Channel and various Web sites to get a feel for trends: Are there any major fronts with which Ill have to contend? Whats the general tone to any weather news? What have other areas of the country experienced in the last few days and is that weather going to impact my route or my destination? Still, I usually self-brief, especially if the weathers good, or at least doesnt involve widespread icing or a mess of thunderstorms. When Im away from home and dont know much about local conditions, Ill definitely pick up the phone and seek out a full briefing.

Of course, I balance all that knowledge with the understanding that theres no foolproof way to forecast the weather with which I will have to contend on my coming flight. No matter how much technology we throw at the problem of weather forecasting and no matter the tools we have in our panels to deal with it, sometimes we just have to park the airplane and admit temporary defeat.

But, Im probably as guilty of cutting corners on weather briefings as anyone. Most of the time, I know the big picture ahead of time and, unless things really suck, Im good with a glance at the area forecasts, a check of the TAFs and METARs and a Notams update. Ill be flying at altitudes and along routes I know fairly well and, even when Im off the beaten path, I pay attention to where divert airports are and plan what Ill need to do to get to one if something bad happens.

While that attitude could be considered lackadasical, by staying abreast of widespread conditions and then getting up close and personal with the numbers being reported and forecast at stations along my route, I rarely run into anything I havent been told about.

The point is that theres no substitute for getting, understanding and applying as much current and theoretical weather knowledge as we can. Doing so helps enhance our flying efficiency and makes things run more smoothly.That said, theres no such thing as too much weather information. But as we shall see, there is such a thing as too little.

Background
On February 16, 2004, at 1714 Central time, a Cessna 182Q was found destroyed in an agricultural field near Rozel, Kan., after being reported overdue.Night visual and instrument conditions were reported between the flights departure and destination airports. The aerial observation positioning flight originated from Pratt Industrial Airport (PTT), Pratt, Kan., destined for Shaltz Field Airport, Colby, Kan. The 8800-hour Commercial pilot, who was known to prefer flying at about 1000 feet agl, was fatally injured.

Investigation
A person representing the accident aircraft called the Wichita Automated Flight Service Station (AFSS) 0535:40 and requested the weather at Colby, Kan., in about 30 minutes. The caller did not specifically request an abbreviated or standard weather briefing. The AFSS specialist provided information on the low pressure dominating the route, southerly winds, lack of frontal systems or hazardous weather advisories and the statement that its …all VFR. The briefing was terminated one minute later, at about 0536:40.

In fact, the weather situation demanded more than a 60-second telephone call. An updated Airmet calling for low IFR in the area of the planned flight was received by the Wichita AFSS shortly after the briefing ended, at 0539:01. Weather information-including current observations and terminal forecasts-available at numerous stations within 100 nm of the accident site reported low ceilings and visibilities. A few automated stations reported VFR.

A pilot-rated witness with some 3800 hours of flight time estimated the weather in the area of the accident included low ceilings and visibilities.He had planned to fly to Wichita, Kan., but cancelled because of the poor weather.

Other than testifying to the accidents severity there was nothing remarkable about the wreckage. The engine was oriented vertically. The still-attached propeller displayed signs of being under power at the time of the crash and was buried four feet into the ground.

Why would an experienced pilot launch on a night flight over northwestern Kansas in the dead of winter without a decent weather briefing? The NTSBs report contains no record of the pilot using either official or unofficial weather sources, so we have to conclude he was not very inquisitive about the conditions he would face. Scud-running, something in which this pilot engaged in on this flight, can be done safely. But doing it anytime-especially at night-requires more than a one-minute briefing.

Well never know if the Airmets information would have made it to the pilot if he had stayed on the phone longer. On the other hand, its easy to say the pilot would have at least been alerted to the low IFR ahead of him if he had requested weather observations and forecasts-or a standard briefing-for his planned flight.

Also With This Article
“Structuring A Weather Briefing”