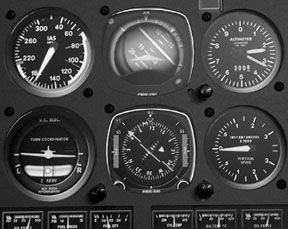 The chances are pretty good that at some time in the recent past someone slapped a suction cup or a sticky note over one or two of your instruments and declared you had just lost your vacuum system. Your scan took on a different bounce and you continued on your way, convincing yourself that you could, in fact, handle such an emergency in the real world.

Say it aint so.

Depending on whom you ask, partial panel flying is either an accident waiting to happen or an unpleasant episode more likely to produce nothing more serious than sweaty palms than it is to lead to disaster. However, to characterize it as either misses the point entirely. Partial panel is a distracting, challenging part of flying that can lead you to the grave if things happen wrong and to the maintenance hangar if everything goes according to plan. The problem is, you dont know ahead of time which its likely to be.

The Air Safety Foundation studied nine years of accidents and found 268 spatial disorientation accidents. Of those, only 26 involved a failure of the vacuum system or an individual vac-driven gyro. A separate 10-year study found 20 accidents involving a failed vac pump and another nine in which an instrument gave up.

The upshot, in both studies, is that an average of three accidents a year were traced to vacuum or gyro failure. During the study periods, total accidents per year averaged more than 2,000.

Clearly, then, your chances of having an accident-inducing failure of the vacuum pump or gyro are remote. But that hardly absolves you of responsibility to keep partial panel technique sharp – and the stakes rise as you fly more complicated machines in worse weather.

The ASF and FlightSafety conducted a joint study in which 24 pilots flew a stationary Cessna 210 sim for about 40 minutes until the vac system was failed. At that point, 16 lost control and 12 crashed while attempting a partial panel approach. After a bit of training, all 24 successfully handled the problem.

Then ASF and CAMI rigged a Piper Archer to allow the vac system to be shut off discreetly in flight. Subjects were screened to be instrument current, and they wore a hood. The airplanes windscreen was polarized to prevent the pilots from peeking outside.

Although it took an average of six minutes for the pilots to detect the failure, none lost control. Only four pilots failed to complete a partial panel approach, but they successfully made a missed approach and the experiment was ended.

However, partial panel episodes can result in the failure of any of the flight instruments, and pilots should train to deal with the various scenarios that may present themselves.

For example, mud daubers or a neglected pitot cover can lead to a loss of airspeed indication. That distraction accounts for runway overruns and other accidents as pilots hold the airplane on the ground waiting for the airspeed to come up, then abort the takeoff too late.

If the static port becomes iced or otherwise clogged you can get inaccurate readings of airspeed, altitude and vertical speed. That might be corrected by using the alternate static source, but youll have to correct the readings based on information in the Pilots Operating Handbook. Do you know what page to flip to?

An electrical system failure can take an electric HSI and turn coordinator offline, and there are some indications that this can present a serious problem to pilots who practice only attitude indicator losses.

Training Solutions
There are several problems that arise during partial panel training, and all may appear to some extent despite the pilots best intentions.

Primary among them is the need to recognize the failure. Many airplanes are not equipped with obvious vac system annunciators and rely only on a suction gauge that is outside the pilots primary scan. Couple that with the stealthy errors that creep into the gyros displays and you have set the stage for a stressful recovery.

As the attitude indicator gyro slows, it will continue to indicate banks in each direction, but the amount of deflection will become exaggerated over time. Fixate on that indication and youll find yourself well on the way to disorientation.

The failure onset cannot be easily simulated, which we think is one reason why it takes so long for pilots to recognize it. Recall the ASF study that found an average of six minutes elapsed.

Another training challenge involves the pilot getting attitude cues from outside. This is a particular issue when the pilot is under the hood and looks up to check the magnetic compass. Although the pilot may not intend to cheat, even a brief glimpse of the horizon is enough to reinforce the pilots belief in which way is up and to forestall the onset of spatial disorientation.

Instructors can detect this condition through what some call a tower test. In this test, they have the pilot turn toward a transmission tower that rises above the airplanes altitude. Its said that the huge majority of pilots turn more or less than instructed so that they are not aimed at the tower – often without realizing it.

The best solution is to use a simulator such as the Motus Flight Simulation Device. Certified as a level 3 training device, the Motus uses 6-degrees of freedom motion to mimic the airplanes movement. Its now finding its way into flight schools around the country. One local flight school has a Motus that rents for less than a Skyhawk – with no time wasted taxiing or being vectored through busy airspace.

That makes it cheaper, more efficient and more effective at partial panel than airplane-based training could hope to be.

Hardware Solutions
There are many different hardware solutions, and the hard part may be deciding which one best fits your budget, airplane and mission.

The traditional solution has been to augment the vacuum pump with a Precise Flight induction tap that used the vacuum in the induction system to run the instruments or a second electric or engine driven pump. Both have pluses and minuses.

A new vacuum pump by Aero Advantage features two chambers and a special drive shaft, so if one rotor fails the other will continue to power your vac systems for at least 20 to 50 hours. Backup vacuum systems can add redundancy to the vac pump, but they leave the attitude indicator (and maybe the directional gyro) as a single point failure.

You can now replace the turn coordinator with an electric attitude indicator, which backs up not only the vacuum system but also the attitude gyro itself. You can back up the attitude indicator with a portable system that has its own display, as in PCFlight Systems eGyro-3 or on a personal digital assistant with solid state gyro modules made by PCFlight Systems, AnywhereMap and others.

For heading information, a handheld GPS that displays an HSI page is a good option. Another way to reduce the problem is to simply have the autopilot track a nav signal, freeing you of the burden to hold heading. If you have an ADF with a slaved compass card, you may be able to use that for heading information.

Technique
Obviously the first step in dealing with partial panel flight is detecting the error. Although the six-pack of flight instruments is key, do not fixate on those primary instruments. Include the suction gauge, annunciator lights and engine instruments in the scan occasionally, too. One trap some pilots fall into is checking the gauges but not relating their indications to the airplanes status. That is, they look at the gauges but do not decipher the significance of the readings.

Once you detect the error, cover the inaccurate instruments. Ignoring a flopping attitude indicator, for example, is harder than you might expect. Make sure you understand how a failure might cascade to other instruments. Does a vacuum system failure take out the HSI? Is the autopilot hooked to the attitude indicator or the turn coordinator?

Controlling attitude is straightforward. Fly airspeed, power and altitude will tell you if you have the airplane trimmed for level flight. That leaves turns as the real problem area.

Limit your use to compass turns, with their associated lead/lag and acceleration/deceleration errors and opt instead for timed turns. For slight turns, count one second of standard-rate bank for every three degrees you want to turn. If the turn is longer, use a timer.

Remember this works only if your turn coordinator accurately indicates a standard-rate turn. Test it occasionally and get it recalibrated if its grossly inaccurate. And if its your turn coordinator that doesnt work, you can approximate a standard rate turn by setting a bank angle equal to the airspeed divided by 10 and multiplied by 1.5. So, for example, a standard rate turn at 120 knots is approximately 18 degrees.

One problem with timed turns can arise when you are being vectored for an approach because the workload gets too high. Remember that if you are flying partial panel you should report the instrument failure to ATC.

Ask for help if you find yourself getting behind the airplane. That means asking for no gyro approach, vectors to VFR conditions or a precision landing approach, as may be required.

Finally, practice partial panel often, if only for a few minutes. Get simulator training to show you what real instrument failures look like. And when youre flying partial panel, speed up your scan and maintain a light touch on the controls.

Systems failures are not an automatic death sentence. They can be scary, but they should be well within your skill level. Dont give up just because something in your panel has.

Also With This Article
“Training Tips”