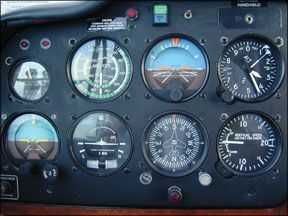 Instrument failure doesnt happen often. But when it appears in an accident report, its almost universally fatal. Instrument failure is part of the required syllabus for the IFR rating, and on the list of items to be included in an instrument proficiency check (IPC).

While failures not resulting in an accident or incident arent reported, the record shows a casual, once-in-a-while demonstration of partial-panel skills doesnt prepare many pilots when an instrument actually fails in IMC. Here are 10 tips you can use in the course of every flight to prepare yourself for partial panel.

With a typical single-instrument failure-as opposed to multiple instruments, like when a vacuum or electrical system falls down-the pilots response should be to use two or more instruments to overrule the suspect. Using this technique requires as many working instruments as possible. The first opportunity we have to verify each instruments operation is before we even take off, while were taxiing out.

The artificial horizon should be erect and not indicate a turn while both the directional gyro and turn coordinator must. The magnetic compass (remember it?) also should behave predictably and be filled with fluid. Other equipment-depending on how the aircraft is equipped-also should be displaying normal behavior before takeoff, especially into instrument conditions. Yes, its an obvious thing, but the accident record is littered with examples of pilots who forgot this basic pre-flight check.

Get familiar with the position of trim indicators in each phase of flight. Sure, the trim settings will vary a little with differences in loading (and also density altitude), but for any given phase of flight they wont vary by much. How useful is it to know, for example, if your attitude indicator fails, you should set power at 17 inches manifold pressure/2500 rpm/rich of peak mixture, flaps at approach and gear down, and three degrees nose-up trim to fly a 500 fpm glideslope at 90 knots?

This type of piloting technique helps significantly to prepare you for partial-panel operation. An instrument failure will have absolutely no bearing on the performance resulting from precise manipulation of power, attitude and drag. Have your attitude even close and youll not only remain alive in partial-panel IMC, youll be able to fairly easily fly an approach or get the airplane into visual conditions.

A corollary to configurations management is keeping a close eye on what your autopilot is doing. Cockpit automation is not a “fire and forget” technology-turn it on to reduce your workload and give you fleeting moments to focus on tasks like briefing for an approach or fine-tuning the fuel mixture, but remember you still have to watch the autopilots operation to catch an upset before it fully develops. Although an autopilot may trim the airplane a little differently than you would by hand, it will still be predictable for a given configuration.

If an instrument begins to fail and youre headed toward partial panel, it may or may not take the autopilot with it. If it does, youll be going from fat, dumb and happy on autopilot to hand-flying a partial-panel (and possibly out-of-trim) airplane immediately. If youre caught napping because you werent actively monitoring the autopilots function, you may not be able to recognize the situation and recover in time.

Many airplanes have secondary instruments for backup in case a primary instrument fails. Backups are important, providing you more information for identifying a failed instrument and adding additional resources to fly once youve made that identification. Its vital, though, that those backups be where you can incorporate them in your scan if you need them.

I do a lot of instrument instruction in high-performance airplanes, many of which are equipped with a backup attitude indicator and maybe a heading indicator and altimeter on the right side of the panel. In so-equipped airplanes Ill put the pilot under the hood and then cover the primary attitude indicator (or HSI, if theres a backup heading indicator on the right side) and then I start counting. Consistently, I see the pilots head turn to the side once, a second, then a third time, until the pilot decides its too difficult or too disorienting to keep moving his head back and forth. At that point he transitions to no-backup, partial-panel flight using whatever gauges remain operating in his/her primary scan.

The takeaway here is its false security if you think having a backup instrument is good insurance against an instrument failure, especially if youre not practiced on how to use it. That goes double for backups on the other side of the panel, forcing a lot of vertigo-inducing head-turning at precisely the wrong time.

If a gyroscope become noisy when it spins, it takes longer to spool up and erect the instrument than it used to, or it makes grinding noises and/or comes to a stop faster than it used to when you shut down the engine after a flight, it may be telling you it is getting close to failure. Dont wait for something as critical to safety as a flight instrument to break before you decide to overhaul or replace it. Instead, fix it before it becomes the cause of an in-flight failure.

Dont launch into IMC immediately after instrument maintenance, repair or replacement. Budget some time for a post-maintenance acceptance flight in good VMC before committing it (and your life) to flight in IMC. Be especially wary if you have a device or component that has failed before, or a new until replacing failed equipment, because the cause of the failure may not have been the unit itself, but something that drives it and is now affecting the new device.

Along those same lines, dont skimp on any of the recommended maintenance or testing of flight instrument-feeding backup systems. Replace filters and check regulator settings regularly. Test and replace batteries regularly. Learn the before takeoff checklist for equipment installed in your airplane so you can find the checklist and test each standard and backup device before committing to dark and/or IMC flight.

Ive had many clients ask me what backups I would put in my airplane if I was starting from scratch. In response, I tell them to put in the area of the pilots primary scan as much independent redundancy they can afford. But I also tell them pilots can save a tremendous amount of money, complexity and airplane weight if they took a small portion of the money they budgeted for installing extra instruments and instead committed to finding a good instrument instructor, and getting some challenging partial-panel dual instruction every couple of months. Doing so is at least as safe as installing a bunch of extra instruments, especially if the pilot does not make a concerted effort to practice using combinations of these and the primary instruments.

Add to the safety of training by including instruction with a ground-based simulation that mimics actual instrument failure. Most gauge deaths are not sudden; they are slow and insidious. You might not recognize an actual failure until long after its loss begins to affect your flying. This cant be simulated in an airplane, where the instructor bypasses the most critical part of partial panel flight-maintaining control while you decide an instrument may have failed, and then properly identifying the culprit-but it can be done even in the simplest PC-based devices.

As a simulator instructor, I found the first sign of an instrument failure for most pilots is a seemingly inexplicable inability to precisely hold heading. The attitude indicator looks right but heading is drifting, or heading is constant but results in odd readings on other instruments. If youre wondering about the heading slowly ticking one way or the other when it shouldnt, start comparing instruments against each other to see what may have given up the ghost.

If you suspect you may have a failed instrument, methodically troubleshoot the gauges:

1. Hold the attitude indicator wings level with the nose on the horizon. Is the heading holding steady? If not, which of the two-heading or attitude-agrees with the turn indicator?

2. Pitch slightly up, just a couple of degrees. Is the altimeter showing an increase? Is the vertical speed indicator in agreement with the attitude change? Again, use two indications to confirm or overrule a third.

3. Once you have identified a failed instrument, cover it with a sticky note or something else obscuring the instrument so you dont get distracted or confused by the progressively off-centered indication of a failed flight instrument.

Lastly, if you do have an instrument failure, use every remaining resource to get the airplane into visual conditions or, if thats impossible, to fly a partial-panel approach to a safe landing. Attitude-based autopilots will generally turn themselves off if an attitude or heading indicator fails and wont reengage.

Rate-based autopilots, though generally considered less smooth and capable than their more-expensive cousins, present a decided advantage: They will continue flying the airplane as long as the turn coordinator driving them works. You can take all the stress out of a heading or attitude indicator failure if you have a rate-based autopilot flying you to safety.

Regardless of which autopilot is installed, or how much redundancy is built into your panel, knowing how it all works and plays together-and which failure modes take away other capabilities-can easily mean the difference between a ho-hum entry on the squawk sheet and an NTSB report. Which would you prefer?