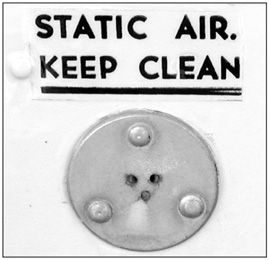 In recent years, failures of the vacuum- or pressure-driven gyro instruments has received a great deal of emphasis when considering in-flight emergencies under IFR. The accident record reflects failures of the gyro instruments are rare but, when they do happen, they too often turn out to have fatal consequences. Unfortunately, failures in the pitot-static system can have the same dire consequences. While pilots spend a lot of time and effort training for gyro instrument failures, little emphasis is placed on what can happen and how to fly the plane when accurate airspeed, altitude and vertical-speed indications are not available.

Blockages
Perhaps the best example of the bad things that can happen when a pitot-static system fails or is blocked occurred on February 6, 1996, when a Boeing 757 crashed into the ocean shortly after taking off from Puerto Plata, Dominican Republic. All 189 passengers and crew aboard the Turkish-registered aircraft died.

Trouble started on the 757s takeoff roll-a good time to have aborted the flight-as the First Officer called out 80 knots. The Captain responded, My airspeed indicators not working. That would soon change, however. After the crew established a cruise climb, the Captains airspeed indicator (ASI) was displaying 327 knots, while the First Officers showed only 200. Soon, the crew determined that the alternate (standby) ASI was indicating correctly, but they subsequently failed to use it to switch the instrument selector to the alternate source.

Soon, the airplane was climbing out of 6600 feet, and the Captains ASI displayed 352 knots. Shortly afterward, the crew reduced power and increased the airplanes pitch attitude, to 21 degrees nose up. At this point, the autopilot disengaged and the airplane began to descend. Another power reduction was made, and the pitch attitude reduced to 14.4 degrees. At this point, the 757 stalled, and abruptly pitched down. Groundspeed was down to 140 knots. The last voice heard on the cockpit voice recorder was, Oh, whats happening? By this point, the plane was descending through 3500 feet, had pitched nose-down more than 50 degrees and was in a 100-degree left bank.Groundspeed was zero.

The final report on the accident said that the erroneous airspeed indications resulted from blockage of the left upper pitot tube for unknown reasons-the airplane had not flown in the 20 days preceding the accident. The accident report also noted that the flight crew became confused over the instrument indications and failed to properly respond to the stick shaker and recover from the aerodynamic stall.

Dealing With Mysteries
Another pilot recently got into a similar situation. The problem was recognized early enough, but it still defied logical explanation-and a solution-until after a successful emergency landing. The aircraft was a pressurized Beechcraft 58P Baron; weather was ugly enough, but flyable-400-600 overcast with three miles visibility in rain and mist; surface temperature was +1 degree C. During the preflight inspection, taxi and run-up, everything checked out as it should. Soon, the pilot was cleared for departure with a climb to 3000 feet, with 7000 as a final where the temperature was advertised at +7 degrees C. With all checklists complete and with takeoff power set, the P-Barons airspeed indicator soon came alive and, at 85 KIAS, it lifted off.

The takeoff and initial climb into IMC is always a busy time, especially for a solo pilot in a piston twin, and this occasion was no exception. As the pilot later wrote, I contacted Departure out of 1400, climbing to 3000, turning to 090. Cleared to 5000. Enter IMC and roll out on 090, check the engines and all are green, scan back to the six-pack of flight instruments and Departure asks, Are you climbing to 5000?

My altimeter was showing 1500 feet; the VSI displayed no rate of climb.My airspeed indicator showed ZERO, while the GPS showed 130 knots over the ground. Im working on it, I replied.

Checking the engines, the pilot found both were putting out the right amount of power. By all indications other than airspeed, altitude and vertical rate, the airplane should have been climbing quite nicely.

Shortly, the pilot requested vectors for the ILS to Runway 27 to return to his departure point. The controller asks him to maintain 2300 feet and fly such-and-such a heading. Somehow, he makes it to 2000 feet, joins the localizer and starts looking for the glideslope, but it never comes alive.

On the miss, the Baron pilot asks for vectors to the opposite ILS, to Runway 9. By this time, he realizes he seemingly cant control the planes altitude and, finally, declares an emergency.

Over the next hour, the same basic sequence is repeated, whether flying an ILS approach or an ASR procedure. Although the flight departed with plenty of fuel to reach its destination, after an hour of approaches and vectoring, there is about two hours of fuel available, which is not enough to reach VMC.This is starting to get interesting.

Finally, ATC advises the pilot he is a mile or so from the airport. Fighting the indicated climb, he manages to get the P-Baron under the overcast and over the airport with ground contact. After what the pilot called a greaser of a landing, the controls work perfectly and the airspeed indicator is alive.

Aftermath/Diagnosis
But, what the heck happened? Sometime after the planes last flight, it developed a pitot-static system leak inside the pressurized cabin. The departure airports field elevation was about 775 feet; the pilot set the pressurization system to engage at about 1500 feet msl. As a result of the leak and the pressurization system doing what it was told, the altimeter displayed cabin altitude whenever the airplane was above 1500 feet msl. Basically, the airplane was at somewhere around 3-6000 feet msl when the altimeter was reading 2000.

As the airplane descended to 1500 indicated, the pressurization system dumped the cabin and the altimeter spun up to the correct altitude, giving a false climb indication. That same basic series of oscillations continued for more than an hour as pilot, plane and ATC told each other what they were seeing, even though little of it made much sense without context.

Lessons
Its easy to armchair-quarterback this and other episodes, especially since it had a favorable outcome and the pilot now knows what went wrong. In this instance, the pilot believed the transponder had a separate static port and encoder, and therefore the controllers were confirming a separate altitude source from the altimeter. That was not the case. As a back-up, the GPSs altitude readout could have been used for a tie-breaker. Of course, turning off the pressurization system would have immediately resolved the problem.

One of the two biggest lessons from this episode is that a pilot can never be too knowledgeable about the airplanes systems. The other lesson is an older one that simply needs to be reinforced from time to time: Fly the airplane. Despite the extremely high workload and stress, the pilot kept working the problem, flying the airplane and keeping his cool. ATC was supportive, too. At the end of the day, thats what its all about.

Early in instrument training, pilots are taught that Pitch + Power = Performance. In other words, if you set full power and pitch the nose up five degrees, the airplane will climb. Learning the power settings for various configurations-climbs, descents, approaches and landing-will well serve a pilot who has lost the pitot-static instruments.

The Boeing 757 pilots in the crash discussed at the beginning of this article never figured that out. The P-Baron pilot hung in there long enough to stabilize things, and thats one of the reasons he survived. What will you do?