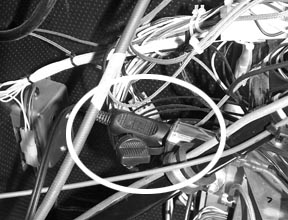 Visit any pilot shop or peruse the ads in an aviation publication. Better yet, stop by the big hangars at AirVenture or Sun n Fun. Youll see a host of electronic devices designed to reduce the pilots workload, increase safety or enhance comfort. Many of them plug into an auxiliary power plug or run off batteries.

Theyre portable electronic flight aids. Or are they?

Some manufacturers are brazen, touting their products for semi-permanent installation. The wink there isnt because the salesman sees dollar signs, but because virtually none of these devices have the blessing of the FAA for installation.

The key, of course, is the word installed. Before we degenerate into a Clintonesque discussion of word definitions, lets be clear about one thing: Not even the FAA will specify exactly what constitutes an installation.

The regulations are fairly straightforward, at least on the face of them.

For an electronic device to be installed in a certified airplane, it has to be TSOd, that is, meet Technical Standard Order C-129 to ensure its operation will not interfere with other instruments installed, nor will its failure take down other instruments.

With a TSO, the device can essentially be installed by a properly licensed technician, the log books filled out, and the airplanes good to go.

Without a TSO, the process is more complicated. The manufacturer must obtain a Parts Manufacturer Approval and get a supplemental type certificate for the first installation. After that installations on similar aircraft can be made through a Form 337 that references the original STC.

The dilemma facing pilots now is that the new portable avionics generally carry neither a TSO nor a PMA. Installation – at least in the traditional sense – is verboten.

For these devices to be installed, the aircraft operator must pursue a field approval, which will require engineering drawings of the device in question, inspections and a bushel of cash.

Install a device improperly or without the right paperwork and the aircraft is legally rendered unairworthy and any pilots who have flown it that way are subject to enforcement action.

And so the question remains: What constitutes installation?

The Name Game
From the FAAs point of view, portable electronics are luggage. The PIC needs to ensure that any device operated on the airplane doesnt interfere with existing instrumentation.

Luggage, of course, isnt plugged into your airplane, and initially the FAA was reluctant to allow using the auxiliary power plug to even power the devices. Batteries were the norm.

The proliferation of handheld GPS units spurred an evolutionary change. While early adopters of handheld GPS were sometimes surprised to find yoke mounts leading to grounded airplanes, the FAA eventually relented and allowed yoke mounts and Velcro. As time went by, the FAA eventually agreed that a device could draw ships power through the now-misnamed cigar lighter socket. Evolution continued, and the agency later decided a portable device could plug into a properly installed external antenna as well.

Although the Washingtonites are debating the merits of allowing some data input to portable devices under certain conditions, the rule regarding installation essentially hinges on two points. Velcro and power plugs are OK, screws and hard-wired power input are not.

But even within that understanding there is still plenty of room for communications to go horribly wrong. A lack of an official, specific interpretation for when portable becomes installed has led to a hodgepodge of interpretations at the Flight Standards District Offices.

Simply put, some FSDOs are generous, giving aircraft operators leeway to do what they think makes sense – particularly for VFR flying – while others stick hard and fast to specific regulatory wording and assume that if something is not specifically permitted, it must be forbidden.

Safe Vs. Legal
In many respects, the regulations and the FAAs reluctance to allow untested electronics to take center stage in a cockpit make sense. Even simple, slow airplanes operate in an environment somewhat more harsh than an electronics lab.

At the same time, the FAAs historical reluctance to approve unfamiliar technology has led to over-engineered and over-built products that few could afford and fewer would want. The Beech Starship is a classic example.

From the pilots point of view, the FAAs position that Velcro and power plugs are OK still gives plenty of rope with which to hang himself. For that reason, it makes sense to examine some of the criteria FAA inspectors use to approve installations of electronics done on Form 337s.

The most official guidance available on this issue is Advisory Circular 20-138, a 1994 production that outlines the approval criteria for installing a GPS. For the purposes of judging a portable electronic advice, the section on assessing the airworthiness of VFR installations is most germane.

Some of the provisions are obvious. The equipment should not interfere with other electronics, either in normal operation or when it malfunctions, nor should other equipment interfere with it. The GPS should be appropriate to the aircraft involved and the hardware should be mounted in accordance with accepted standards for aircraft alterations.

Failures should either be clearly annunciated or the unit should turn off. The unit should be ground tested before flown and test-flown before its considered ready for use. And the manufacturer should provide information about the operation of the unit that will become part of the POH.

That sounds easy, and on the face of it installing non-approved electronic flight instrumentation appears to be easy, especially for devices designed to be portable and therefore self-contained.

The field approval process that outlines how to get legal permission to install unapproved devices, however, is extremely conservative. That makes getting approval an uncertain thing at best, and the engineering tests involved make it a more expensive proposition than most aircraft operators are willing to undertake.

That leads to the salesmans pitch for semi-permanent installation.

Portable. Sort of
Consider the portable devices now available and imagine a cockpit equipped with the full range. A PDA could take center stage, displaying any of a number of products that include GPS with moving maps, real-time weather downloads and a solid-state attitude indicator with GPS-derived directional gyro.

Backing up the portable EFIS would be a handheld GPS and a standalone electronic attitude indicator. A handheld transceiver (or two) could supply communications through a portable intercom and portable traffic detection systems could alert you to traffic.

If youre counting, youre up to at least six power plugs, seven if you have an ANR headset that plugs into ships power. Eight (or nine) if you want to charge your laptop or the satellite cell phone that downloads the weather.

The plugs are augmented by the wires that connect the PDA to the gyro module and the two GPS antennas to their respective receivers and the satellite phone to the PDA and the headset to the intercom.

Add lots of Velcro, a yoke mount or two, some twist ties to bundle the wires and its obvious that each portable item is part of a larger non-portable mess. The safety implications in the extreme reflect the FAAs caution in officially entering the fray of what constitutes installation.

FAA blessing or not, there are several standards to which portable electronics must be held if the installation passes muster on the safety meter of a pilot operating the airplane, including weight, visibility, electronic or physical interference, component strength, electrical system loads, and the mess of electrical spaghetti that can result.

The specifics of each one depend on the airplane, the pilot and the device itself. Some applications may raise the ire of an FAA inspector, despite strict adherence to the Velcro and power-plug rule, if the assembly violates that inspectors sense of order.

In a way, describing installation is like Supreme Court Justice Potter Stewarts 1964 explanation of obscenity: I shall not today attempt further to define [it] … but I know it when I see it.

Although portable is, in some respects, in the eye of the beholder, they do give pilots access to a wide variety of electronic devices that can aid their flying. A little common sense in putting them into the airplane will go a long way, not only toward making the airplane safer, but also in making sure an FAA inspector wont see something filthy where you see only beauty.