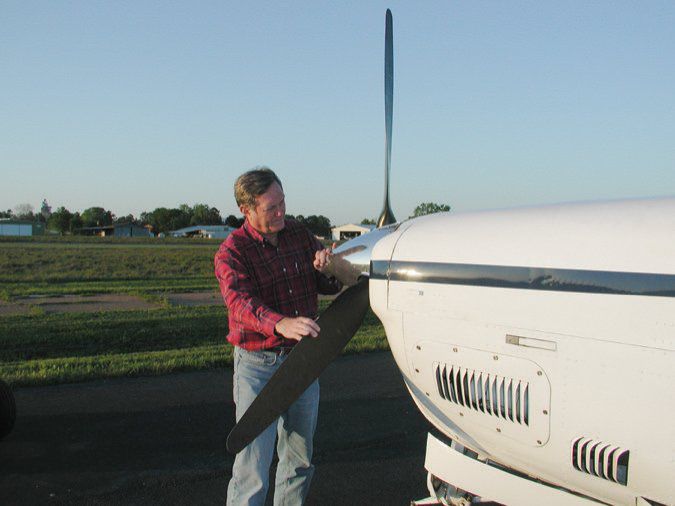 Propellers often are not well understood by general aviation pilots. Their purpose—transferring the engine’s horsepower into thrust by moving a large volume of air to the rear—usually is obvious. How this feat is accomplished may not be. Looking at a propeller blade cross-section will reveal it is actually an airfoil, one moving at a right angle to the airplane’s desired motion.

A closer look will show the actual airfoil section varies with each blade station to provide the most efficient angle of attack for not only the rotational speed but also when considering the aircraft’s forward speed. The blade’s airfoil is thickest at the propeller hub, tapering to a much thinner section at the tip, reflecting the range of airspeeds different portions of the blade experience in operation.

The propeller’s pitch, as with any threaded device, is the forward distance it moves in one revolution. The actual distance a propeller moves forward in the air in one revolution is termed “effective pitch,” since there will be some slippage. Coarse pitch (low rpm and increased angle of attack) will allow the aircraft to move forward further in one revolution than a fine pitch (high rpm, low angle of attack) setting. Airplanes are certified with certain engine and propeller combinations providing the most efficient operation in all flight regimes.

There are several different types of propellers used in modern aircraft. The aforementioned fixed-pitch propeller is a single piece of aluminum alloy or wood. Anything other than a fixed-pitch prop is designed so its blades can pivot in the propeller hub, allowing different angles of attack, including feathered, flat pitch and reverse.

As the name implies, a controllable pitch propeller allows its pitch to be controlled by the pilot. They are distinct from constant-speed propellers, which employ a governor automatically providing constant rpm by changing the blade angle within a preset range. Full-feathering props allow blades to be rotated to a high positive angle aligned parallel to the slipstream and stop their rotation (windmilling) after an engine is shut down aboard multi-engine airplanes.

Controlling propeller blade angle is almost exclusively done with hydraulics, although electrical components also have been used. Typically, engine oil pressure is boosted, allowing the propeller governor to change blade angles. Constant rpm is maintained by adding or relieving pressure to find the blade angle necessary to maintain the selected rpm. Controllable pitch, constant-speed and feathering propellers use springs, counterweights, accumulators and centrifugal force plus hydraulic pressure to control their function. There are many variations, and it’s important to be familiar with the operation and procedures of the propellers you fly behind, between or in front of. 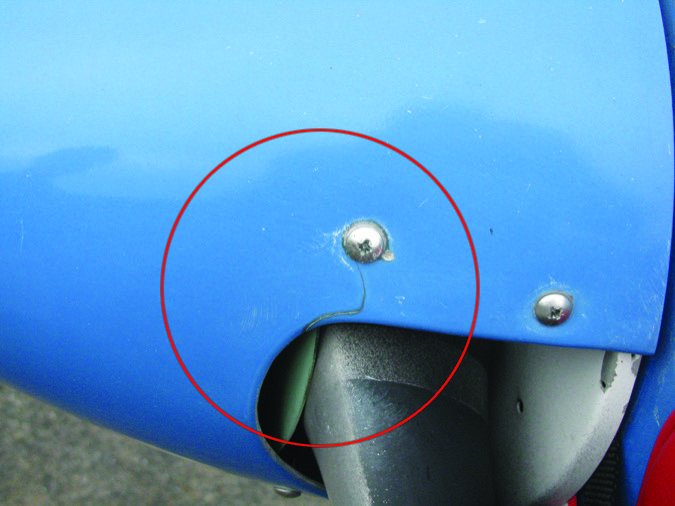 Performing a good preflight involves a thorough check of the propeller and spinner before operating the engine. Corrosion and deferring defects that require maintenance are major causes of propeller failures. Even minor dings in the blades require maintenance and referring to the manufacturer’s maintenance instructions to determine if it’s still airworthy. Cracks, oil or grease leaks, damaged spinners and missing screws also are reasons to seek out professional input. 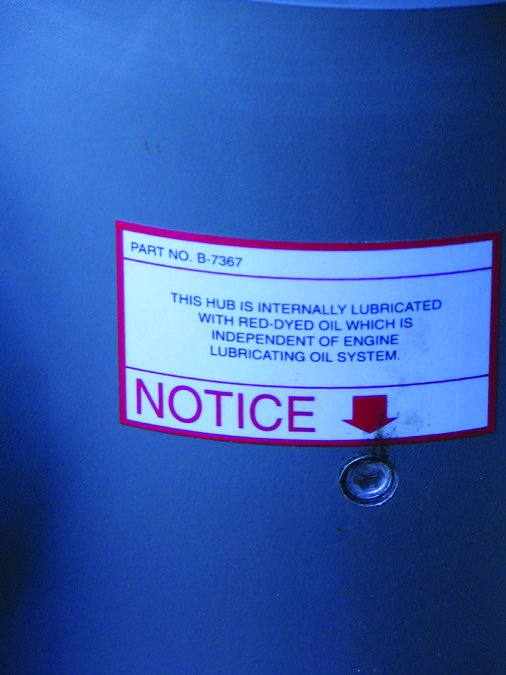 Rotation of a blade in its hub is also a concern, and while some props do allow for a some play, it’s best to have it checked by a professional if in doubt. Pre-takeoff operational checks of the pitch change mechanisms, feathering and governor operation also are important. Static rpm checks falling within approved parameters for aircraft with fixed-pitch propellers can verify the engine and propeller are functioning properly. Of course, unusual operations during flight should always be cause for concern and may mean maintenance is necessary. 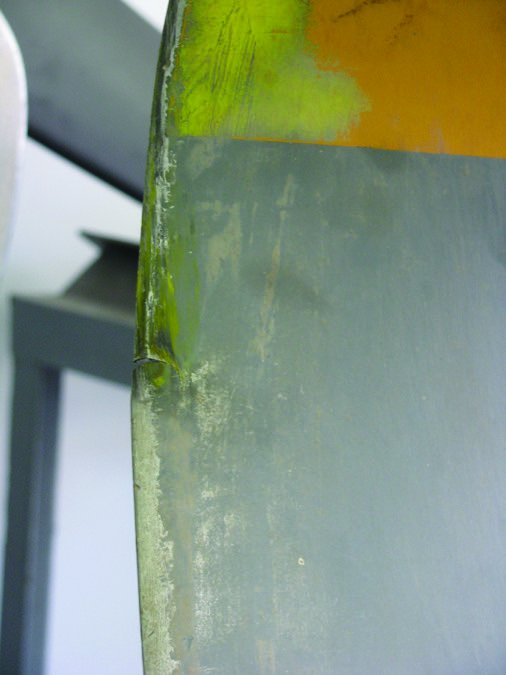 Some aircraft are equipped with wood propellers, which swells and shrinks depending on humidity and temperature. Even composite props may be built around a wood core. Without periodic re-torquing of an all-wood propeller’s mounting bolts, seasonal changes may allow it to become loose during operation and, in a worst case, emit smoke from the hub during operation. This is a serious condition.

Indications of propeller or governor trouble include sluggish response to rpm or aircraft speed changes. A propeller on a multi-engine airplane that feathers itself without being commanded to do so definitely is a problem. It could signify a serious crack or something minor like an O-ring or seal that has deteriorated. Grease or oil leaks can allow moisture in while the propeller is stationary, causing corrosion.

Another potentially serious problem is a runaway propeller, one which is out of control and typically drives to the low-pitch, high-rpm position. This condition is almost certain to cause a powerplant to exceed its redline speed and, if allowed to continue, the engine may disintegrate or propeller blades may depart the aircraft. In such an instance, the airplane’s forward speed will drive the propeller even if the engine is not producing power. So it’s important to slow to a minimum speed and land at the nearest suitable airport. There may be aircraft-specific procedures to follow should an event such as this occur, and the prop will certainly need an inspection.

Propeller vibration can be another indicator maintenance is needed. A technician familiar with the engine/prop combination will check that propeller blade track is within limits and that the prop is installed in the correct position—it’s possible that changing the propeller’s position on the crankshaft may correct a vibration problem. Consider the long-term effects of vibration on the complete aircraft and all the installed components such as instruments and avionics, plus powerplant accessories such as the alternator, magnetos or vacuum pump. While a slight vibration can be acceptable, any vibration should be investigated as to the origination if for no other reason than to avoid damage or failures and costly repairs.

When the Wright Brothers invented the airplane, they also had to invent the airplane propeller. This statement by Orville Wright describes the challenge of producing an aircraft propeller that would provide enough thrust to sustain flight:

This sums up the challenge a propeller designer faces. While major improvements in design and materials have been made over the 100-plus years since the Wright Brothers’ propeller design debuted, the basic principles remain.

In the certificated world of aviation, propellers have their own type certificate. Just as an aircraft must adhere to its type design to remain airworthy, so too must a propeller. Referring to its type certificate data sheet (TCDS) will reveal important data that is often overlooked, including life limits, approved installation details and required placards.

Do not overlook the notes section of the TCDS. Manufacturers’ maintenance manuals will specify conditions and requirements concerning airworthiness, including damage assessment and required placards.

While the manufacturer’s maintenance manual and instructions for continued airworthiness must be followed, FAA Advisory Circular AC 20-37e,Aircraft Propeller Maintenance, is a quite informative reference guide. It can be especially helpful to your A&P maintenance technician, who is limited to inspecting, cleaning, servicing and lubricating, adjusting, dressing minor nicks and dents, painting and removing/replacing propellers. Other maintenance is considered major and requires the services of a repair station or properly rated individual with the necessary equipment.

While the maintenance of propellers may seem routine to mechanics in the field, several mistakes have occurred over the years and seem to be repeated, even though these errors and resulting accidents have been widely publicized. One error involves failure to following the installation procedure when attaching the propeller to the engine and under- or over-tightening the mounting bolts. Some installations require mounting bolt threads be dry while others require “wet” or lubricated threads. Use current maintenance instructions and follow the procedures carefully.

Some propellers require a specific grease. Always use a lever-action grease gun, pumping slowly so as to not blow out the seals. The lubrication schedule and procedure can be quite detailed and must be followed to prevent damage to the propeller.

Paint applied to a propeller must not only be an approved type but must be the correct color. Unapproved paint may create corrosion in the aluminum alloy blades and/or the hub.

Do not guess at propeller mounting torque; take the time to look up the correct values, always use a calibrated torque wrench and always use the specified mounting bolts, hardware and safety wire.

At each annual or 100-hour inspection, check that the tachometer installed on the aircraft is properly calibrated, and verify that fixed-pitch propeller/engine combinations are approved and operate within static rpm limits at full power. Finally, mechanics always should research applicable airworthiness directives prior to returning an aircraft/engine/propeller to service.

Propellers and propeller repairs are expensive, so it’s important to take care of that hunk of metal hanging off your engine. Do not push or pull on a propeller to move your airplane; use an appropriate tow bar, as even a moderate amount of force on a blade can throw it out of track, or worse. Corrosion is another problem that causes a propeller to become condemned early in its life. Keep your prop clean by removing insect residue, dust, bird droppings, etc., with cleaning chemicals approved for aircraft (aluminum) use. A light coat of oil can help to form a barrier preventing moisture from attacking the metal.

Finally, keep an operating propeller away from the pavement. Maintain the nosewheel’s strut on your aircraft at the upper limit and perform engine run-ups away from loose gravel and dirt. Take care of your propeller and it will take care of you.