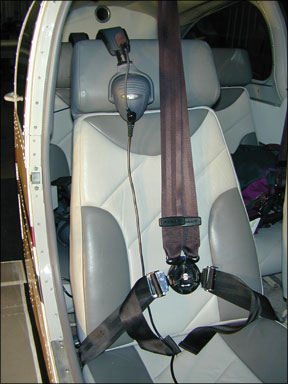 While none of us plan to crash our airplanes, stuff happens. The NTSBs database is replete with accident reports involving events like engine failures and ensuing off-airport landings where the engine started and ran fine after the investigators arrived. In many of them, plenty of fuel was aboard and carburetor ice was ruled out. Most of those reports go on to state the engine failed for unknown reasons.

We cant choose when well have to set one down but-by avoiding hostile terrain like mountains and oceans, or flying only in daytime VFR-we can choose many of the conditions well experience. We also have the ability to maximize the likelihood of a favorable outcome. Once we agree the aircraft is expendable but the human cargo inside isnt, one way to minimize the risk of an off-airport landing is to ensure all occupants are provided and use appropriate restraints. Shoulder harnesses, in other words. If youre flying a small airplane manufactured after July 19, 1978, it came from the factory with shoulder harnesses. If yours doesnt have them, it should. According to the FAA, “a properly installed retrofit shoulder harness installation is a safety improvement over occupant restraint by seat belt alone.” Thankfully, there are a number of options available for retrofitting shoulder harnesses to airplanes. And along the way, the FAA has adopted policies encouraging their installation without too many paperwork hassles.

Only in recent years have aircraft designers and manufacturers paid serious attention to crashworthiness. Seats were first to receive attention from engineers concerned with survivability, resulting in strengthened anchoring systems and “S”-shaped bases designed to absorb and dissipate vertical energy in a crash. Elsewhere in the airplane and the cockpit, components like fuel tanks and pumps have been relocated away from the passenger cabin, for obvious reasons. But the very nature of most personal aircraft means there are practical limits to enhancing crashworthiness.

At least when considering personal aircraft designed before the 1990s, crashworthiness considerations were nonexistent. Many airplanes have but one door for accessing the cabin. Instrument panels are usually designed as part of the aircraft structure, where stiffness is more important than softness. Few if any of the knobs, buttons and handles on the average instrument panel are designed to minimize injury in an accident. And-with a few notable exceptions-control yokes are mounted on stout tubes aimed at the front-seaters chests. According to NASAs Small Airplane Crashworthiness Design Guide, “Control yoke designs that have horizontal shafts that pass through instrument panel and into the aircraft crush zone should be avoided. Full-scale tests have shown that these horizontal shafts can be thrust into the occupant with great force during the impact.”

In modern designs like the Cirrus and Lancair/Columbia/Cessna Corvallis, primary controls have been relocated from directly in front of the pilot and front-seat passenger to the cabin sides. Padding and upholstery are much more prominent on the instrument panel, which itself has been designed to minimize injuries to flailing arms and legs. And, as detailed in a recent article (“Airborne Airbags?” August 2010), airbags are now available, both as a retrofit for existing aircraft and as either standard or optional equipment on new ones.

Stay Out Of The panel

Throughout much of the advancements in cockpit safety, theres been one overriding goal: restrain the occupants to minimize flailing limbs and keep their upper torsos and heads from colliding with the instrument panel and other structures. According to the FAA, “studies of serious accidents have shown that the proper use of shoulder harnesses, in addition to the safety belt, would reduce major injuries by 88 percent and reduce fatalities by 20 percent.”

Another FAA statement highlights the importance of delethalizing aircraft interiors: “The distressing fact is that roughly one-third of general aviation accidents with fatalities are deemed survivable. Many of these are accidents during takeoff or landing and generally involve loss of engine power. Others occur during an attempt at a controlled landing. In these events, the crash forces themselves do not kill the pilot. The fatality results from an abrupt encounter with the airplane controls or the panel. Both fatalities and serious injuries can be greatly reduced by proper use of a shoulder harness.”

Okay, so youre sold on the idea of upgrading your airplanes existing lap belts and installing some kind of upper torso restraint. Which kind should you consider, where should you buy it and how will you get the installation past the FAA?

As with any proposed modification, the first place to start is with the people who will be doing the actual installation: your mechanic or maintenance shop. Not only will both of you need to decide on what type(s) of harnesses to install, but where to get them and what FAA approvals will be necessary.

The table above details many sources of retrofit harness kits appropriate for a wide range of aircraft in the fleet. One source omitted is the airframe manufacturer itself. Beechcraft, for example, has long made available a factory kit-including brackets, rivets, belts and even escutcheons-designed for their in-field products. Other manufacturers provide similar support for their so-called “legacy” aircraft. Investigate your airframe manufacturers options alongside evaluating the aftermarket vendors listed in the table.

A factory kit also has the benefit of requiring little paperwork since the engineering and FAA approvals already have been performed. While installing such a kit likely will require filing with the FAA a Form 337 to detail the alteration, thats a formality. The same is true when installing an STCd harness kit from one of the manufacturers detailed in the table on the preceding page: FAA approval is routine in these instances.

The most ticklish regulatory situation is when theres no factory kit, no STC and no existing field approval for your aircraft. Since properly anchoring a harness requires using some existing aircraft structure, and since the FAA gets particular about attaching things to certified aircraft, many owners were stuck. Some, it turned out, had gone ahead and installed harnesses, anyway, reasoning the FAA was the lesser of their problems. Also, many FAA offices in Alaska approved such installations without requiring supporting engineering data.

A September 2000 policy statement by the FAA, in its own words, removed “many of the barriers associated with the installation of retrofit shoulder harnesses,” allowing “owners of certain small aircraft to increase the level of safety in their aircraft.” That policy statement is available online from the FAA Web site at www.faa.gov/aircraft/gen_av/harness_kits/media/shoulderpolicy.pdf.

One more quote from NASAs Small Airplane Crashworthiness Design Guide: “At a minimum, all aircraft must have a belt or harness-type restraint for each occupant that includes a lower torso (lap belt) and upper torso (shoulder belt) restraint.” Unless youre flying a relatively new personal airplane, chances are it has only a lap belt. To stay out of the instrument panel, you need at least a shoulder belt; a “Y-“style or four/five-point harness would be even better, according to NASA.

Again, no one plans to crash, but-as weve noted-stuff can happen. When it does, the likelihood is the crash itself will not generate non-survivable forces, presuming occupants are adequately restrained. There are many options available to owners for retrofitting their aircraft with appropriate upper-torso restraints. In our view, this is definitely one of the areas where its better to be safe than sorry.